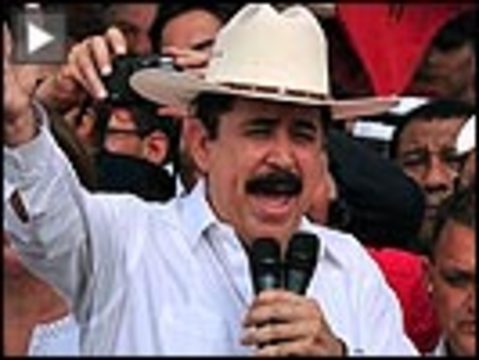 *Goodman is ONLY U.S. journalist on the plane with Zelaya*

NEW YORK, NY: Saturday, May 28, 2011—Amy Goodman, the award-winning journalist and host of Democracy Now!, will report from the flight of the ousted former president, Manuel Zelaya, as he returns to Honduras after a 23-month exile following the coup d’etat that began June 28, 2009.

Zelaya is expected to return to Honduras on Saturday, May 28, 2011. In the first military coup in Central America in a quarter century, General Romeo Vasquez led the military coup in Honduras against the democratically-elected President Zelaya. On September 21, 2009, Mr. Zelaya returned to Honduras and entered the Embassy of Brazil in Tegucigalpa, hoping a popular rebellion would restore him to office. Democracy Now! reported from inside the Embassy of Brazil for the 129 days Zelaya remained there before departing Honduras January 27, 2010. (For video and transcripts of Democracy Now! reports, including an exclusive interviews with Zelaya, please see links below.)

Goodman, the only U.S. journalist on the plane with Mr. Zelaya during his historic return, will be available for interviews in Honduras.

Mr. Zelaya is expected to land at the Toncontín airport in Tegucigalpa, Honduras, on Saturday, May 28, 2011 at 11:00 AM local time.

Democracy Now! will report on Mr. Zelaya’s return to Honduras from Saturday, May 28th through Monday, May 31, 2011 and will post reports and updates on its website and Tumblr page. High resolution photographs and audio will be available for download on the Tumblr page.
(CREDIT: DEMOCRACYNOW.ORG)
Democracy Now!
Democracy Now! on Tumblr

Reports in Spanish will be available on the Democracy Now! en Español website

ABOUT DEMOCRACY NOW!
An independent, global, daily news hour, Democracy Now! is hosted by award-winning journalists Amy Goodman and Juan Gonzalez. Democracy Now! is broadcast in English and in Spanish on more than 900 public television and radio stations around the world.

EXCLUSIVE: Ousted Honduran President Manuel Zelaya Speaks from Nicaraguan Border on Who’s Behind the Coup, His Attempts to Return Home, the Role of the United States