We continue our interview with Annie Jacobsen, author of the new book, Area 51: An Uncensored History of America’s Top Secret Military Base. Jacobson describes the disk-shaped A-12 Oxcart spy plane developed at the Nevada military base, her interview with the plane’s pilot, and discusses how the CIA handled reports of UFO sightings. “They even had a department called the Office of Strategic Deception,” says Jacobson. “One has to believe that they have that same department today, although it is still classified.”

Click here to listen to part one of Jacobson’s interview.

AMY GOODMAN: Our guest is Annie Jacobsen, author of Area 51: An Uncensored History of America’s Top Secret Military Base.

Annie Jacobsen, just start off by refreshing our listeners and viewers, especially young people who may have heard of Area 51 but not know what it is. Where is it? What does it do?

ANNIE JACOBSEN: Area 51 is located in southern Nevada desert about 75 miles north of Las Vegas. It’s set inside a greater land parcel that’s about the size of the state of Connecticut, that’s called the Nevada Test and Training Range. And it’s where many government agencies, including the Department of Defense, the Atomic Energy Commission, now known as Department of Energy, the CIA, they come together and work on these top-secret projects that are meant to push science and technology for military application faster and further than any place else on earth.

ANNIE JACOBSEN: Well, everything that goes on at Area 51 is classified top secret when it’s going on. And I think my book is really the first peeling back of the onion, so to speak. I give you a window into Area 51, what it was like. But keep in mind that much of what I write about takes place in the 1950s and '60s. And there's so much more to know about Area 51, but that’s all classified.

JUAN GONZALEZ: Well, some of the planes that you mention that research was being done on, I’ve never heard of. There was one called the A-12 Oxcart spy plane?

JUAN GONZALEZ: Could you talk about what that was and what it did?

ANNIE JACOBSEN: Yes, it was a remarkable spy plane. And it’s also fascinating, the CIA declassified that program in 2007, and yet it began back when Eisenhower was president. You know, I actually came to really greatly admire the Department — the CIA’s Department of Science and Technology for what they were capable of in the '60s and also what they were able to keep secret, I think in that instance, arguably, for good reasons. They created this Mach 3 spy plane. That's three times the speed of sound. And it would fly at 90,000 feet, which is 17 miles up. I interview one of the pilots of that incredible espionage plane. His name is Ken Collins. And the idea was to spy on the enemy to prevent nuclear war. And the CIA got no credit for doing that. In fact, the Air Force got all the credit, because while most people have never heard of the A-12 Oxcart, because it’s been classified for so long, they have seen its cousin, which is the famous SR-71 Blackbird, that Air Force spy plane that supposedly invented all that technology. And now we know it was actually the CIA.

AMY GOODMAN: Annie Jacobsen, can you talk about Operation Black Shield and the secret history of the USS Pueblo?

ANNIE JACOBSEN: Well, that involved that A-12 Oxcart plane, and it was at a very difficult time in American history. Of course, the Vietnam War was going on. The Tet Offensive was about to happen. This is January of 1968. And the North Koreans captured the USS Pueblo in international waters, but the Pueblo was there to spy. And the North Koreans surmised as much. They captured the ship and its crew. And at the time, the Defense Department, led by Robert McNamara, wanted to declare war on North Korea. They were very gung ho about doing this. This is all behind the scenes, only recently declassified. But the CIA stepped in and said, “It’s a really bad idea. We already have one war going on in Vietnam. Let’s see exactly what’s up with the Pueblo.”

So they sent the Oxcart, which was at the time stationed in Kadena. It had one base at Area 51, another base in Japan. And they sent an Oxcart flying over North Korea for two reasons: to look for the Pueblo, to make sure that the North Koreans actually had it, which they did, and also to see if the North Koreans were in fact lining up for war, as the Department of Defense was pushing the president to suggest was reality, which was not. And so, in that regard, the CIA’s plane really did prevent a second war, which we could very ill afford.

JUAN GONZALEZ: And the role of this A-12 in terms of inadvertently helping to spread the conspiracy theories about UFOs?

ANNIE JACOBSEN: Yes. Well, you know, I examined a lot of CIA declassified UFO files, which are fascinating, because there was a huge UFO craze going on in America. There still is today, but it certainly started in '47. And by the ’50s, it was in full force. And when the U-2 was flying out of Area 51, it accounted for over half of the West Coast UFO sightings. Then, along comes this follow-on spy plane program, after Francis Gary Powers was shot down over the Soviet Union in a U-2. The U.S. needed a faster, higher-flying spy plane that could stay out of the range of these Soviet missiles. And that spy plane was so astonishing in its makeup. As I said, it flew at 90,000 feet. Your average commercial was flying, at the time, around 30,000 feet. It was made of titanium. And it flew 2,300 miles an hour. So there's many of these instances. And I discussed this with the commander of Area 51. His name was Colonel Slater. He talked about having to deal with the FBI constantly, because these commercial airplanes would be flying over Nevada and California. The pilot would look up, and he would see, you know, miles above him, this A-12 Oxcart whiz by. It would certainly look like a UFO. And so, the FBI would have to meet that commercial airliner on the ground when it landed and make the passengers and the pilots sign what were called “inadvertent disclosure forms.” All of them would have to swear that they would never discuss that with anyone. And this, you can see how it fed into a lot of the mythology about UFOs — and the government trying to cover them up.

ANNIE JACOBSEN: Well, in my book, I outline — it’s very serious. And it’s shifted and, you know, moved around, their position, as far as I can tell, the CIA’s position on UFOs, because in the 1950s they were very concerned that the Soviets were going to perform a hoax on the United States involving a UFO. These are memos from the second director of the CIA. His name was General Walter Bedelle Smith. And he writes a lot of memos to the National Security Council with his deep fear that Americans were susceptible to hysteria — those were his exact words — and that this UFO idea needed to stop, because it could make America’s early air defense warning system, that system that would let us know if the Soviets were attacking — by all of these false UFO reports, it could flood the system and make America vulnerable to an actual Soviet attack. So, you really see this fascinating role that the CIA has played historically in UFOs. They even had a department called the Office of Strategic Deception to kind of work with those conspiratorial ideas. And one has to believe that they have that same department today, although it is still classified.

AMY GOODMAN: Nazi scientists and the U.S. government working with them?

ANNIE JACOBSEN: You know, this is the most controversial part of my book. In the last seven pages, I kind of lean into the reader. I do a very significant thing for me as a journalist. I’ve told you the story in the third person using traditional reporting techniques, naming my sources, backing everything up with documentation that’s been declassified. But I lean in to the reader, and I tell you in the last seven pages why I think Area 51 is still classified, to the point where the United States government will not admit it exists, despite all the evidence otherwise. And that is because of a story that was told to me by a source which I trust implicitly. I worked with this man for over two years. He worked for the Atomic Energy Commission. He was a member of the Manhattan Project after the war.

And what he told me was that this hoax also involved human experiments that were conducted by Joseph Stalin, who teamed up with the Nazi doctor Josef Mengele right at the end of the war and learned from Mengele and put his own horrific human experiments into effect. That figures into the flying disc hoax that was perpetrated by Stalin. This is shocking information. You know, I really worked at great lengths to absolutely be clear that I believe the veracity of my source. But what’s most surprising to me is that the reaction by people is more “this is impossible.” And it’s not impossible, when you read my book, when you learn about what scientists were capable of in that era, under the great paranoia of this threat of nuclear war. And I think that’s a discussion that people should take more seriously, about what it means to push science to this degree. 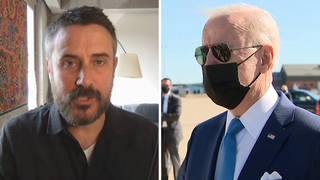