As the United Nations Security Council considers the Palestinian bid for statehood, we speak with human rights lawyer, Raji Sourani, director of the Palestinian Center for Human Rights in Gaza and Vice President of the International Federation for Human Rights. Sourani says even if the bid does not pass, it will show the world that the United States and Europe failed to support Palestinian Authority President Mahmoud Abbas, a man dedicated to peace. He says Palestinians want a two-state solution, as outlined in the PLO charter, the Oslo Accords, and called for by much of the international community. Sourani also discusses how the 1.8 million residents of Gaza, more than 90 percent of whom live below the poverty line, are “in the eye of the storm” of Israel’s siege that blocks the movement of people and goods without deterring Hamas. He also notes that the popular uprisings sweeping across the region in the Arab Spring have been a great asset for the Palestinian cause. A 1991 recipient of the Robert F. Kennedy Human Rights Award and an Amnesty International Prisoner of Conscience in 1985 and 1988, Sourani was denied entrance to the United States for the past 11 years because of his alleged affiliation with terrorists. His trip to the United States on a three month visa was made possible after a campaign in which former U.S. president Jimmy Carter, among others, advocated on his behalf. 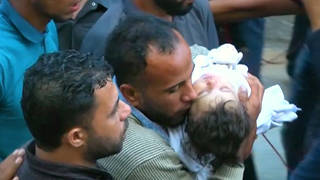