From the Archive: Newt Gingrich Outraged over Amy Goodman’s Tough Questions about GOP’s “War on Women”

Newt Gingrich’s attacks on reporters who have asked him tough questions during the 2012 Republican presidential primary may sound familiar to Democracy Now! listeners and viewers. Watch the video above to see Amy Goodman question Gingrich about the GOP’s “war on women” and why he hadn’t apologized for calling First Lady Hillary Clinton a “bitch” — first in 1995 during his tenure as speaker of the House and again at the 2000 Republican Convention in Philadelphia.

Click here to see the 1995 comment by Gingrich’s mother that Goodman refers to in her questions. During a nationally broadcast interview on Eye to Eye with Connie Chung, Gingrich’s mother whispered that her son called Hillary Clinton a “bitch.”

See all of Democracy Now’s coverage of Election 2012.

AMY GOODMAN: Back in 1995, when Newt Gingrich was speaker of the House, I had an interesting conversation with him about the war on women. We’re going to introduce that little interaction with the news piece that introduced it, which was the news anchor at the time, Verna Avery-Brown.

VERNA AVERY-BROWN: The usually unflappable speaker of the House, Newt Gingrich, was knocked a bit off stride today during his daily speaker’s conference, when Pacifica reporter Amy Goodman raised the issue of whether Republicans are waging an unofficial war against women with their welfare reform efforts.

AMY GOODMAN: I have a question about tone. You were talking about that earlier. Many people are talking about what’s going on in the House as a war on women, that most of the poor are women, the whole issue about reproductive rights that keeps getting raised. But this is a question not about legislation. Some say you really fired the opening salvo against women when you didn’t apologize to American women for calling the First Lady a bitch. Why haven’t you apologized?

SPEAKER NEWT GINGRICH: I never—I never said I—I never agreed to say anything about that. And I can’t imagine you asking this question.

AMY GOODMAN: Why haven’t you apologized for it?

SPEAKER NEWT GINGRICH: I’ve talked to Mrs. Clinton. She understands exactly where we—

AMY GOODMAN: Why haven’t you apologized to American women, because it goes beyond calling—

AMY GOODMAN: So, you’re calling your mother a liar then?

SPEAKER NEWT GINGRICH: No, I’m calling you a remarkably foolish person for having that kind of a conversation here. And I am very sorry you would care to bring what Connie Chung back into the public arena. Connie Chung lied—

SPEAKER NEWT GINGRICH: You’re now trying to exploit a lie by a professional reporter to my mother. And I’m not going to take any more comment from you. I think it is very embarrassing that you, as a reporter, would try to take any use of Connie Chung having lied to my mother. And I think you should be ashamed.

SPEAKER NEWT GINGRICH: I think you should be—yes, it is.

AMY GOODMAN: Why haven’t you apologized to American women for calling Hillary Clinton a bitch?

SPEAKER NEWT GINGRICH: Because I—because I didn’t—I’ll say it one more time. You’re trying to use my mother in what I think is a very despicable way. And I am very—

AMY GOODMAN: Your mother said something, and we’re responding to what she said.

SPEAKER NEWT GINGRICH: I think it is very sad, and I have advised my mother to talk to no reporters because of precisely this kind of exploitation by people like you. Next question.

AMY GOODMAN: That was Newt Gingrich in 1995 at speaker’s conference, which had been going on for many years. The speaker would hold a news conference every day. He ended it soon after that. Apparently, he blamed it on that interaction, among a few others. I thought it was more to do with the bombing of the Oklahoma City building. It happened just after that that he canceled the speaker’s conference, because his rhetoric sounded too much like those that surrounded Timothy McVeigh.

But anyway, I had a chance to follow up on the conversation when I met Newt Gingrich at Jimmy Hoffa’s party.

AMY GOODMAN: What are you doing now?

NEWT GINGRICH: I’m spending about half my time learning, and then I’m at the American Enterprise Institute and the Hoover Institution studying. And I have a consulting firm called the Gingrich Group, and I have a website called newt.org. And I’m a commentator on Fox. So, I’m not bored.

AMY GOODMAN: So you’re a commentator. Well, let me ask you for this comment. You’re on national television now. Will you apologize to American women for calling the First Lady a bitch?

NEWT GINGRICH: I never did that. That’s just plain false.

AMY GOODMAN: Your mother said you did.

NEWT GINGRICH: I—no, she did not say I did. That’s just false. Go back and read the record. What you just said is false.

NEWT GINGRICH: I did not say that. Go back and look at the record.

AMY GOODMAN: But your mother said you said it.

NEWT GINGRICH: No, she didn’t. Go back and look at the record. You have it exactly backwards. And I find it very offensive that you would bring up my mother, as I found it offensive when Connie Chung brought up my mother. And I think it’s nuts for the national news media to pick on people who are clearly amateurs, who, in my mother’s case, had opened her home. My father had baked a cake. They were thrilled to be open. And she was exploited by a reporter. And I think it’s a very offensive that you would try to exploit my mother, which is what you just did.

AMY GOODMAN: Well, it was your mother, who said that you had called—

NEWT GINGRICH: No, she didn’t say that. Listen to what I said.

AMY GOODMAN: She did say it.

NEWT GINGRICH: She did not say that I called her that.

AMY GOODMAN: She did say it. But then my question is, you were talking about the Contract with America.

NEWT GINGRICH: I have nothing to say to you. If you’re telling me what my mother said, that’s pretty offensive.

AMY GOODMAN: Well, she said it on national television.

NEWT GINGRICH: No, she didn’t.

AMY GOODMAN: You were describing—

AMY GOODMAN: As you were—

AMY GOODMAN: Well, no, I have a fair question to ask that I’d like you to respond to.

AMY GOODMAN: And that was the interaction with Newt Gingrich at the Jimmy Hoffa party that was sponsored by the Republicans.

StoryJan 04, 2013Newly Sworn-In 113th Congress Is the Most Diverse in History, But Not the Most Progressive 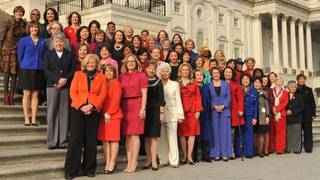 Newly Sworn-In 113th Congress Is the Most Diverse in History, But Not the Most Progressive