The scandal that brought down CIA director David Petraeus has spread to the top U.S. commander in Afghanistan, General John Allen. The Pentagon says the FBI has uncovered thousands of “potentially inappropriate” emails between Allen and Jill Kelley, the woman who complained of harassment from Petraeus’ biographer and lover, Paula Broadwell. Kelley’s complaint to the FBI led to the discovery of Broadwell and Petraeus’ relationship, prompting Petraeus’ resignation on Friday. We’re joined by Guardian columnist and blogger Glenn Greenwald. [includes rush transcript]

StoryAug 26, 2021Sarah Chayes: Afghanistan Was an “Afterthought” for U.S. as Bush Was “Hellbent” on Invading Iraq

NERMEEN SHAIKH: We turn now to the latest developments in the scandal that has brought down CIA director David Petraeus and ensnared General John Allen, the top U.S. commander in Afghanistan. The Pentagon says the FBI has uncovered thousands of, quote, “potentially inappropriate” emails between Allen and Jill Kelley, the woman who complained of harassment from Petraeus’s lover, Paula Broadwell. Kelley’s complaint to the FBI led to the discovery of Broadwell and Petraeus’s relationship, prompting Petraeus’s resignation on Friday. Allen succeeded Petraeus in Afghanistan last year. The Pentagon says Allen will remain the U.S. commander in Afghanistan for now, but that plans to nominate him to become NATO’s Supreme Allied Commander are on hold pending the outcome of the investigation. Responding to the revelations, White House spokesperson Jay Carney reaffirmed on Tuesday President Obama’s faith in General Allen.

AMY GOODMAN: To talk more about the significance of this inquiry and much more, we’re joined now by Glenn Greenwald, columnist and blogger for The Guardian, author of With Liberty and Justice for Some: How the Law Is Used to Destroy Equality and Protect the Powerful. His most recent piece in The Guardian is called “FBI’s Abuse of the Surveillance State is the Real Scandal Needing Investigation.”

GLENN GREENWALD: I think there is a lot of media focus on the salacious aspects of this case for reasons that are obvious, which is that the media loves sex scandals. But there are real issues arising from this of genuine importance and substance, beginning with the fact that the FBI, based on really no evidence of any actual crime, engaged in this massive surveillance effort of, first, obtaining all kinds of intimate and private information about two women, one of whom complained, one of whom was the target of the complaint, Paula Broadwell and Jill Kelley; learned the locations and email accounts of Paula Broadwell, who was the subject of this fairly innocuous complaint; read through all of her emails; learned the identity of her anonymous lover, David Petraeus; likely read—certainly read through all of her emails, probably read through his; and then, in the process, as well, learned about an affair between the complainant, Jill Kelley—or not an affair, but inappropriate communications, as they’re calling it, and the four-star general in Afghanistan, General Allen; and then obtained 20,000 to 30,000 pages of emails between them, as well.

So you’re talking about a massively invasive investigation without any of their knowledge, obtaining their most private and intimate communications—all without evidence of any predicate crime, really without the need, except in a few cases, for judicial view or oversight. And, to me, it really illustrates how—how invasive and sprawling this unaccountable surveillance state has become. This happens all the time, just generally to people less powerful and influential than the two generals in question here. And so we can really learn lessons, I hope, about what we’ve allowed the government to do in terms of its investigative powers.

PAULA BROADWELL: I have a detail to share with you.

PAULA BROADWELL: He can turn water into bottled water.

PAULA BROADWELL: Isn’t that your line?

JON STEWART: One thing we did find out is his nickname is Peaches.

PAULA BROADWELL: Was—it was Peaches when he was in—he was in high school, and it followed him to West Point and has stuck a little bit.

PAULA BROADWELL: When I realized the opportunity I had to tell this message, to present this portrait of strategic leadership—you know, it’s not—it’s not a hagiography; I’m not in love with David Petraeus. But I think he does present a terrific role model for young people, for executives, for men and women. No matter what, there’s a great role model there who is—who is values-oriented, who speaks the truth to power.

GLENN GREENWALD: One of the things that I think is so interesting is that what she was saying in those interviews and in her book fit very comfortably into the general media narrative about David Petraeus. She may have had a deeply personal relationship with him, but the affection that she had for him was shared by most of the people in the media who were covering and discussing him. And one of the national security reporters for Wired magazine, Spencer Ackerman, actually wrote a commendably candid piece this week confessing that he had essentially hypnotically joined what he called “the cult of David Petraeus,” along with most of the—his colleagues in the national media who cover national security. And I think it really evinces this sort of reverence for all things military, and specifically for General Petraeus.

NERMEEN SHAIKH: You actually, Glenn, spoke in one of your most recent pieces about how popular the military is in the U.S. In fact, it is the single most popular and affirmed institution: 78 percent of Americans profess, quote, a “great deal” or a lot of confidence in the military, according to a Gallup poll. One of the few journalists, apart from yourself, who’s expressed some skepticism about General David Petraeus is Michael Hastings. He’s a reporter for BuzzFeed and Rolling Stone, and he recently appeared on CNN Piers Morgan Tonight and said there are many reasons Petraeus should have resigned, reasons that have nothing to do with his affair with Paula Broadwell.

MICHAEL HASTINGS: I mean, I think’s many other reasons Petraeus should have resigned besides who he’s sleeping with that’s not his wife. But I just want to make a point here. The larger point that I’ve been making is that essentially the media has played a role in protecting David Petraeus and promoting David Petraeus and mythologizing David Petraeus. And we saw it here tonight. General Kimmitt, who was a spokesperson in Baghdad, who was a roommate of Petraeus, who was involved in one of the biggest debacles in recent foreign policy history, is on TV, you know, defending David Petraeus without actually addressing the real problems with David Petraeus’s record. And those are the fact that he manipulated the White House into escalating in Afghanistan; he ran a campaign in Iraq that was brutally savage, included arming the worst of the worst, Shiite death squads, Sunni militiamen; and then you go back to the training of the Iraqi army program that also had similar problems. So, for me, all the while, he’s going around the country talking about honor and integrity.

GLENN GREENWALD: Well, I think Michael Hastings is a fascinating case. If you recall, he’s the reporter who wrote the Rolling Stone cover story about General McChrystal who ended General McChrystal’s, Stanley McChrystal’s, career, who at the time was the commander of the war in Afghanistan. And what was amazing about that was, nobody doubted the authenticity of the quotes that he included in his article, and yet huge numbers of the most prominent media figures who cover the war in Afghanistan attacked Michael Hastings viciously—John Burns at the New York Times, Lara Logan at CBS.

And what they were essentially accusing him of doing was violating the trust of the general, not because he had reported things that were supposed to be off the record, but because they said that you develop a bond with these generals. John Burns talked about how you end up sleeping in the same tent with them, flying over war zones in Afghanistan, and that they really have an expectation that you should honor, as a reporter, to protect and shield them and their reputation. And that’s what these journalists see themselves as doing, as serving as spokespeople for these military figures, and that’s why they were so angry at Michael Hastings.

He was attacked again because of that CNN interview. There’s an article in Politico essentially describing him as—as this sort of unhinged person who, as they put it—this is a quote—is “muddying” the “sacred waters” of journalism through his, quote-unquote, “advocacy.” And so, what you really see is there’s—there’s a perception that there’s no national religion in the United States. Christianity is not the state religion—that’s true. But the national religion in the United States is worship of all things military. And journalists are its high priests.

AMY GOODMAN: So now what does this mean for Afghanistan, for the CIA? First of all, you had this general, a military general, becoming head of the CIA. Now David Petraeus is out. And then you have whatever is going to happen to John Allen happen. What does this mean?

GLENN GREENWALD: I’m not sure it really means anything for the policies of the national security state. The national security state seems to endure no matter what happens to its particular figureheads. I think they’ll simply be replaced. I’m not sure, actually, that General Allen is going anywhere. Certainly, David Petraeus was an important person in the sense that he was so revered, almost as a religious figure, that he shielded the CIA and other military institutions from any kind of criticism. But I think you’ll see most of that enduring.

AMY GOODMAN: And has been pushing for an expansion of the drone war.

GLENN GREENWALD: Right. But, of course, President Obama, who’s the commander-in-chief and his boss, is very much on board with an expansion, not just of a drone war, but of the conversion of the CIA into even more of a paramilitary organization than it has ever been before. Obama is enamored of this idea, and I think that will continue fully apace, so whoever steps in will be fully on board with that. 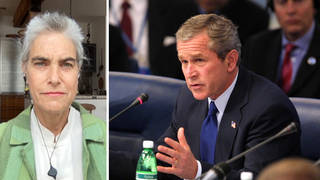 Sarah Chayes: Afghanistan Was an “Afterthought” for U.S. as Bush Was “Hellbent” on Invading Iraq