President Obama will open deficit reduction talks on Friday with a call for a $1.6 trillion tax hike on corporations and the wealthiest Americans over the next 10 years. Obama and House Speaker John Boehner are sitting down to avert the so-called “fiscal cliff” of expiring tax cuts and automatic spending reductions set to take effect at the end of the year. We’re joined by Guardian columnist Glenn Greenwald, who says the protection of “entitlement” programs will depend on action from Obama’s progressive supporters. “The question is: Will the Democratic Party, and specifically the progressive and liberal component of the Democratic Party, change its behavior from cheerleader, from blindly supportive, partisan apparatchiks … into some kind of a force where they actually fulfill their duties as citizens, which is to hold political leaders accountable?” Greenwald asks. [includes rush transcript]

NERMEEN SHAIKH: So can you say a little bit, Glenn, about the significance of Obama’s re-election last week?

GLENN GREENWALD: Well, I think that a lot of it depends not on what President Obama does. There is some expectation that he’s now suddenly going to reveal his true progressive self, now that he’s been liberated from the pressures of re-election. I think this is completely mythological fantasy thinking. I think we see who the true President Obama is. I take him at his word that the policies that he pursued in the first term are the policies that he believes in.

I think the question is: Will the Democratic Party, and specifically the progressive and liberal component of the Democratic Party, change its behavior from cheerleader, from blindly supportive, partisan apparatchiks, which is what they were in the first term, putting pressure on him in almost no instance, cheering for whatever it is that he did, no matter how contrary it was to their professed values, into some kind of a force where they actually fulfill their duties as citizens, which is to hold political leaders accountable?

And I think the very first test for this is going to be what Amy began the broadcast by discussing, what I know you’ve been covering here this week, which is the budget fight, where it is almost certainly the case that President Obama will do what he already attempted to do, which is target the crown jewels, legislative jewels, of liberalism, which are Social Security and Medicare, for cuts, in order to pursue this grand bargain with the Republican Party. And will the liberal wing of the Democratic Party do anything more than just make symbolic and empty gestures toward opposing it but at the end become good partisan soldiers, as they always do, or will they provide real opposition?

AMY GOODMAN: Let’s go to recent comments by Republican House Speaker John Boehner, who argued against any tax hikes as part of a deal to avoid the so-called “fiscal cliff.”

HOUSE SPEAKER JOHN BOEHNER: Instead of raising tax rates on the American people and accepting the damage it will do to our economy, let’s start to actually solve the problem. Let’s focus on tax reform that closes special-interest loopholes and lowers tax rates. Instead of accepting arbitrary cuts that will endanger our national defense, let’s get serious about shoring up the entitlement programs that are the primary drivers of our country’s massive, growing debt.

AMY GOODMAN: House Speaker John Boehner. So, right now, there’s been a lot of concern, especially among progressives, but beyond that, about, you know, ensuring that people pay their fair share. But the trade-off, it’s clear President Obama has signaled, is cuts to what they call “entitlement” programs—Medicare, Medicaid, Social Security. Talk about these, what yesterday our guest Sarah Anderson of Institute for Policy Studies called “earned” income benefits [“earned benefit programs”], actually, not “entitlements.”

GLENN GREENWALD: Well, of course, I mean, Social Security is something that people have paid into their entire lives, not just people who are on the verge of receiving those benefits, but even workers who have been in the workforce for some time.

And what is truly extraordinary about this moment, to me, is that what really defined President Obama’s first term, from a domestic and economic perspective, is that the recovery from the financial crisis was one that was a recovery for the wealthiest in America. Corporate profits boomed. Wall Street and the stock market increased, at the time when the foreclosure crisis continued to worsen. Very little attention was paid to that. Very little has been done about unemployment. And so, the income gap, the rich-poor gap, in the United States is the highest that it’s been in four decades, since 1967. People are still suffering, as President Obama, when he was campaigning and had an interest in saying so, continuously emphasized. And so, now, to approach this crisis by targeting the very few programs left that provide a civilized safety net to the people who need it the most is obscene.

And so, I think that if you see the Democratic Party, whether in the name of principle, as I think President Obama will pursue it, that it’s the right thing to do, or simply even necessity of compromise, which some partisans ultimately will invoke in order to defend it, target those programs, even in minimal ways and symbolic ways—but I think it will be much more than that—I think that would really be an assault on everything that progressives not only claim to believe in, but claim was the primary reason they were for voting for President Obama, which was to protect entitlement programs.

NERMEEN SHAIKH: But you also make an argument, Glenn, about why it would be easier and it will be easier for Obama to curtail these programs in a way that it would not have been possible, say, if Romney had been elected. Can you elaborate on that?

GLENN GREENWALD: Sure. I mean, this, to me, was the principal deficiency of the discussion and discourse leading up to the election in Democratic and progressive circles. If you were a journalist working for the last year, as you were, as I was, and identifying things that President Obama was doing that were wrong or that were erroneous, the argument that you would immediately hear is, “Well, Mitt Romney is worse,” by which those people would mean that the position that Mitt Romney had in the campaign on those issues was either as bad as or worse than the one that President Obama had. Now, in one sense, that was irrelevant. If you’re a journalist, if you’re a citizen, your duty is to hold the people who exercise power accountable. And the fact that Mitt Romney is worse doesn’t alleviate that obligation. But even from an election perspective, that’s an incredibly simple-minded and incomplete way of looking at things. The question is not: Is Mitt Romney’s view on a particular issue, or are the Republicans’ position on a particular issue as bad or worse? The question is: What are each candidate able to accomplish in their particular field?

So, there’s that cliché about how only Richard Nixon could have established relationships with Communist China, because only a Republican could do it. I think only a Democratic president could have institutionalized the drone war, assassinated U.S. citizens, persecuted whistleblowers. And lots of Bush officials had said, “There was a lot of this stuff that we wanted to do that we knew we couldn’t do, because had we tried, there would have been an enormous storm from Democrats, from the media, and we just couldn’t do it.” But Obama can do it because he brings progressives and Democrats along with him. Mitt Romney never would have been able to cut Social Security or target Medicare, because there would have been an enormous eruption of anger and intense, sustained opposition by Democrats and progressives accusing him of all sorts of things. President Obama has the ability, as he’s proven over and over, to bring Democrats and progressives along with him and to lead them to support and get on board with things that they have sworn they would never, ever be able to support. And for that reason, he is in a much better position, he’s much more effective, at institutionalizing these horrible policies than Mitt Romney or any other Republican would have the ability to do.

There’s—just let me add to that. There’s this amazing analysis from Jack Goldsmith, who’s on the faculty of Harvard Law School. He was formerly a Justice Department—Bush Justice Department official, who last week wrote, in a celebratory way, that what President Obama’s re-election will mean is that the terrorism policies of George Bush and Dick Cheney that were once so controversial will now be permanently shielded from criticism in a way that Mitt Romney could never have achieved, because Democrats and progressives, under Obama, will ignore those policies or cheer for them, whereas if Romney had been re-elected [sic], their interest in these issues and their opposition to them would have been revitalized. I think this is the pattern that you see over and over, is that even if Obama is the lesser of two evils, he is also the much more effective of two evils. And that was the analysis that was, I think, missing so profoundly leading up to the election.

AMY GOODMAN: We’re going to break and then come back to Glenn Greenwald, columnist and blogger for The Guardian. This is Democracy Now! Back in a minute. 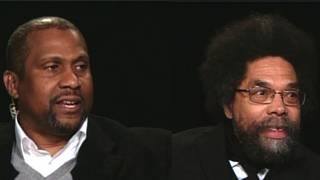