Accused U.S. Army whistleblower Bradley Manning has offered to submit a partial guilty plea on charges of leaking classified documents to WikiLeaks in return for the government agreeing to pursue lesser charges. Manning is reportedly ready to admit to leaking the documents to WikiLeaks but is refusing to plead guilty to the charges of espionage or aiding the enemy. Manning’s offer comes as a federal appeals court has dismissed a lawsuit against former Defense Secretary Donald Rumsfeld for his role in crafting policies that led to torture in Iraq. The ruling marked a victory for the Obama administration, which followed the Bush administration in seeking the lawsuit’s dismissal. We’re joined by Guardian columnist Glenn Greenwald. [includes rush transcript]

AMY GOODMAN: Our guest is Glenn Greenwald, columnist and blogger for The Guardian, author of With Liberty and Justice for Some: How the Law Is Used to Destroy Equality and Protect the Powerful. Glenn, Bradley Manning, the latest news we have that he’d be willing to plead guilty to some charges—Bradley Manning, give us a bit of his history and respond to the latest, so that people who don’t know him will know.

GLENN GREENWALD: Well, Bradley Manning, of course, is the 23-year-old—now 23-year-old Army sergeant who has been held for two-and-a-half years by the U.S. military without having been convicted of anything yet. He was held in solitary confinement, intense solitary confinement that a formal U.N. investigation found was cruel and inhumane.

And so, he’s obviously, at the age of 23, very worried about spending his life in prison and is therefore considering, in order to escape from those more serious charges, acknowledging that he did in fact disclose this information—which nobody in the government has ever been able to prove has led to any harm to anybody, but, if he did it, has actually produced more transparency and crucial journalistic scoops for the world than any act since Daniel Ellsberg 40 years ago—and therefore have the trial focus only on this question, the real flaw in the government’s case, which is: Was there really an intent to aid al-Qaeda?

He could have passed the information to al-Qaeda. He could have sold it to foreign governments. There were all kinds of ways he could have benefited personally from this. But if those chat logs are to be believed, the ones that the government has, what he says is that what motivated him was his shock to discover that the government, in whose military he had enlisted, was engaged in all kinds of deceitful and corrupt acts, and he needed the world to see that and know that, so that reforms were possible. That was his intent. He is a noble whistleblower. And the way in which American—the American left and Democrats now revere Daniel Ellsberg for his act of heroic whistleblowing, and yet have completely ignored the case of Bradley Manning, whose act, as Ellsberg himself says, is every bit as courageous and probably more consequential in terms of what it reveals, is really appalling.

AMY GOODMAN: So he’s been held for three years. He says he would not plead guilty to treason or to aiding the enemy.

GLENN GREENWALD: Correct. All he is willing to plead guilty to, as a means of avoiding life in prison, is acknowledging that he actually disclosed this classified information.

AMY GOODMAN: To WikiLeaks, which brings us to Julian Assange and the latest on him, Glenn.

GLENN GREENWALD: Well, Julian Assange, of course, is still held up in the embassy, the Ecuadorean embassy in London. There are some negotiations still ongoing between the British government and the Ecuadoreans. Of course, the key here is that Assange himself, his lawyers, Ecuadoreans and Assange’s defenders all want him to go to Sweden. They are—have been working for almost six months now in order to get him to be able to go to Stockholm to face these allegations. The holdup is not Assange; it is that the British and the Swedes, and especially the United States, refuse to provide him any meaningful protection, minimal protection, that if he goes to Sweden, that will not then be used as a ruse to get him to the United States to face espionage charges. The minute they become more reasonable and give him some minimal protections and safeguards for his human rights, he will be on the next plane to Stockholm to face these allegations, as he should be.

NERMEEN SHAIKH: I want to turn to another case having to do with the use of torture in Iraq. Last week, a federal appeals court dismissed a lawsuit against former Defense Secretary Donald Rumsfeld for his role in crafting policies that led to torture in Iraq. In an 8-to-3 decision, the U.S. 7th Circuit Court of Appeals ruled two American citizens allegedly tortured at a U.S. military base have no right to sue Rumsfeld and other U.S. officials. The plaintiffs, Donald Vance and Nathan Ertel, were reportedly arrested and tortured after collaborating with the FBI in an investigation of their employer in Iraq, the private security company Shield Group Security. The company subsequently revoked the men’s credentials for entering Iraq’s so-called Green Zone, effectively barring them from the safest part of the country. Shortly after, they were arrested and detained by U.S. troops at Camp Cropper, where they faced physical and psychological torture. The two men were eventually released and never charged with a crime. Last Wednesday’s decision overturns two previous court rulings allowing the case to proceed. The Obama administration has followed the Bush administration in seeking the lawsuit’s dismissal. Glenn Greenwald, your response to these developments?

GLENN GREENWALD: Well, unfortunately, this is an extremely common development. Of all the institutions that have so profoundly failed in their duties in the aftermath of 9/11—the Congress, the media, the citizenry, to some extent—the federal judiciary is probably the most disgraceful, because they are supposed to be the court of last resort, the branch that is designed to hold officials in the executive branch accountable.

And to me, the most extraordinary fact of the 9/11 era is not that no government officials who committed these egregious crimes or torture and warrantless eavesdropping, rendition, invasions, have been held accountable—that is an amazing fact. The more amazing fact is that not a single victim of the war-on-terror abuses have been allowed even to have their day in court, let alone to achieve justice. In each and every case, the courthouse doors have been slammed in their face by having courts invoke either claims of radical secrecy or government immunity, the idea that our government officials are immune from the law, from any consequences, even when they commit the most egregious crimes. That, I think, is what history will view as the most profound failure in the wake of 9/11.

AMY GOODMAN: Glenn Greenwald, we want to thank you very much for being with us, blogger and writer for The Guardian. His latest book, [With] Liberty and Justice for Some.

Noam Chomsky on Gaza, and the 2 Positives of Election 2012: The Worst Didn’t Happen — and It’s Over

NEXTNoam Chomsky on Gaza, and the 2 Positives of Election 2012: The Worst Didn’t Happen — and It’s Over 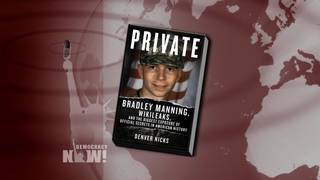