We get a live report from independent journalist Mohammed Omer from a hospital in Gaza City, where injured journalists, medical workers and civilians — including children — are arriving for treatment. An award-winning journalist based in Gaza, Omer has been covering the latest Israeli assault since it began six days ago. We’re also joined by Richard Falk, the United Nations special rapporteur on human rights in the Palestinian territories. [includes rush transcript]

AMY GOODMAN: We have Mohammed Omer on the phone right now at the hospital where the journalists have been brought who were injured in the attacks on the Palestinian media center. And we’re going to try to go to him in one minute. But, Richard Falk, I wanted to get your response and what i means for you to be the U.N. special rapporteur on human rights in the Palestinian territories. I think we have Mohammed, though, so let’s go to him first in Gaza City, because it was hard to get him. Mohammed Omer, where are you, and what are you seeing? Mohammed, can you hear me? Mohammed, can you hear me?

MOHAMMED OMER: Yes, I hear you right now. [inaudible] Shifa Hospital at the moment, where a number of people just arrived with injuries, severe injury, and one of them was completely burned. The target is—this moment, is the building which belongs to all the journalists in Gaza City, in Gaza City. But right now I’m seeing—I’m seeing—I’m seeing all the ambulances and its passengers. They are bringing more casualties at this stage. And I’m just looking inside—I’m just looking inside to see what is this—OK, it’s coming now, the car. And one of the injuries is actually a medical staff who was trying to rescue the life of the journalists who were injured in the attack just a few minutes ago. The situation is deteriorating at the moment with a F-16 firing missiles on the Gaza Strip. And I am right now at the Shifa Hospital. It’s—it’s quite panic for all the journalists to see their colleagues being attacked at this stage.

AMY GOODMAN: I’m going to go back to you, Mohammed Omer, in just one second. I want to get a final comment from Richard Falk, U.N. special rapporteur on human rights in the Palestinian territories. As we wrap up, Richard, your final response?

RICHARD FALK: It is incredibly frustrating to represent the U.N. and to realize that it’s incapable of acting in a situation of such extremity from the point of view of the existential horror that the people of Gaza are being subjected to by this unlawful and criminal style of attack. I do agree that the rocket fire has to stop, too, but it has to stop in the context of a ceasefire, of ending the blockade, of returning to a condition where diplomacy and law and morality are respected as the foundation of the relations between Israel and the Palestinian people.

AMY GOODMAN: Richard Falk, I want to thank you for being with us, U.N. special rapporteur on human rights in the Palestinian territories, professor emeritus of international law at Princeton University. And Raji Sourani, I want to thank you, as well, winner of the Robert Kennedy Prize, Memorial Prize, director of the Palestinian Center for Human Rights. But I want to end with Mohammed Omer in the hospital now in Gaza City.

AMY GOODMAN: Mohammed, your final comments. How many bodies, how many people are you seeing? Mohammed Omer is asking questions of people around him. Just describing after the media center has been hit three times in—with Israeli fire, he says, from an F-16, he is seeing people being brought in, including a medical aid who had gone to help the journalists in the tower that was hit. Mohammed, final comments from the hospital?

AMY GOODMAN: Mohammed? Mohammed, are you there? Well, we seem to have lost him. But, of course, we will continue to follow this story. This is Democracy Now!, democracynow.org, The War and Peace Report. Mohammed Omer is a prize-winning Palestinian reporter, won the Martha Gellhorn Prize for Reporting. Mohammed, can you hear me? Your final comments from the hospital?

MOHAMMED OMER: Well, right now there are more children who are arriving with injuries. As we can hear, the F-16s are still firing missiles on a number of people. We just also arrived from the northern part of the Gaza Strip, where there was an assassination. So far, the guy who was killed is not identified because they found only pieces of flesh, a burning body. And we are not quite sure who is the person. This brings the number of people who were killed into—into 95 killed and 850 injured. The majority of them are the children.

AMY GOODMAN: And the significance of the journalists’ building that was hit, the media center, that the Israeli military says is Hamas’s communications center, which is why they hit it? And they—the—Ofir Gendelman, spokesperson for Netanyahu, put out a tweet saying, “”No Western journalists were hurt during the IAF operation aimed to destroy Hamas’ military comm. situated on the roof of [a] media building.”

MOHAMMED OMER: Well, all we know is that this bombing is targeting journalists. There are six journalists who were injured, colleagues and journalists who were injured, and one of them who had his leg amputated as a result of the bomb. This is the third time that the building which housed most of the TV stations, including Reuters, NBC, and all the electronic—Al Arabiya and other TV channels, including international channels, working in the Gaza Strip. The situation, as I’ve said, is deteriorating at the moment. The bombing is reaching the journalists who are broadcasting. There is—I’m among many journalists here at the gate of Shifa Hospital, where they see some of their colleagues coming with injuries. There is news that some of their colleagues are still stuck in the building, and they are not able to leave the building, as one of the medical team workers who were trying to help is—has just been hit and arrived to the hospital with a severe injury.

AMY GOODMAN: And [Mohammed], you said most of the people you’re seeing being brought in now are children, mostly children?

MOHAMMED OMER: This is mostly children and civilians, that’s right, mostly children. I just saw, about a couple of minutes ago, more children who are brought here, and with severe injuries. Israel is using some type of weapons that burn the bodies of the children, burn the bodies of the children and makes it difficult to identify who are those people. We also see some of the staff, medical staff, who are bringing more bodies. Like just a minute ago, there was someone who’s collecting pieces of flesh and the brains of somebody who was killed by the Israeli missiles.

AMY GOODMAN: Mohammed Omer, speaking to us from right outside the hospital in Gaza City. Thank you, Mohammed Omer. We will continue to follow the siege of Gaza, of course. You can go to our website at democracynow.org, as well, tomorrow.

This is Democracy Now! When we return, President Obama is in Burma, the first time a U.S. president has gone there. Stay with us.

Obama in Burma: A Milestone for Reform or Groundwork for Oil-Friendly Junta Rule?

NEXTObama in Burma: A Milestone for Reform or Groundwork for Oil-Friendly Junta Rule? 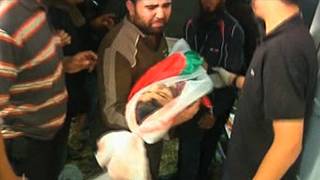