Obama in Burma: A Milestone for Reform or Groundwork for Oil-Friendly Junta Rule?

President Obama made history today by becoming the first sitting U.S. president to visit Burma. During his six-hour visit, Obama met with President Thein Sein and visited the home of the opposition leader Daw Aung San Suu Kyi, where she was confined under house arrest for most of two decades before her release two years ago. Obama’s new openness toward Burma has drawn concern from human rights activists who say such overtures of friendship are “premature” due to continuing political violence plaguing large swathes of the country. We’re joined by Jennifer Quigley of the U.S. Campaign for Burma and journalist Peter Popham, author of “The Lady and The Peacock: The Life of Aung San Suu Kyi.” [includes rush transcript]

AMY GOODMAN: President Obama made history today by becoming the first sitting U.S. president to visit Burma. Tens of thousands of Burmese lined the road from the airport to welcome Obama to their country, which held elections earlier this year after 50 years of military rule.

During his six-hour visit, Obama met with the Burmese president and visited the home of the opposition leader, Aung San Suu Kyi, where she was confined under house arrest for more than 15 years before her release two years ago.

For more, we’re joined by two guests. In Washington, D.C., Jennifer Quigley is with us, advocacy director of the U.S. Campaign for Burma. And in Britain, London, we’re joined by Peter Popham. He is the author of The Lady and the Peacock: The Life of Aung San Suu Kyi.

We welcome you both to Democracy Now! Peter Popham, let’s go to you. You wrote Aung San Suu Kyi’s biography. Talk about the significance of President Obama in Burma meeting with Aung San Suu Kyi, who could well be the next president of Burma.

PETER POPHAM: Well, it’s clearly a massive step, and it’s a massive vote of confidence for President Thein Sein and a tribute to the effectiveness of Aung San Suu Kyi’s campaign over many years. There are reasons for thinking that perhaps it’s premature, because the one thing that Burma needs to do now is to enact constitutional change, to do something to remove the inevitability of generals continuing to rule in one form or another. And I think there is quite a lot of feeling that maybe the president has jumped the gun in the sense that constitutional change is not on the cards yet.

AMY GOODMAN: Jennifer Quigly, you have been very critical, your organization, the U.S. Campaign for Burma, of President Obama going to Burma at this point. In fact, word was, although Aung San Suu Kyi accepted it now, she, too, originally said this is too soon. Why?

JENNIFER QUIGLEY: Because it’s seen as an endorsement of the current status quo in Burma, which while there’s been limited reform in central Burma, you’re seeing a lot of ethnic conflict carried out by the military, carried out by those with racial hatred against the Rohingya Muslim minority. And so, going at this point is not going to be seen as his concern for the ethnic minorities; it’s going to be seen as an endorsement of the status quo in Burma, which is military rule with a few reform-minded individuals.

AMY GOODMAN: Explain what is happening in the north of Burma right now, the significance of what’s taking place.

JENNIFER QUIGLEY: Well, there’s actually—there’s two. There’s northeast Burma. There’s been a war that the Burmese army has been fighting against the Kachin ethnic minority for 18 months, and denying humanitarian access to the IDPs from that war. The other has been since June of this year, some intercommunal violence that has really turned into a systematic, targeted violence against the Rohingya Muslim minority. And so, both of these things go to show you that the Burmese military has no plans whatsoever of changing their crimes against humanity, their war crimes, their complete dominance over the Burmese population. And so, while President Obama wants to sort of reward the reformists, they don’t have control over the Burmese military.

JENNIFER QUIGLEY: I mean, we absolutely think it’s premature. The entire human rights community earlier this year told the Obama administration to not allow investment in the oil and gas sector. That money goes directly into the pockets of the military. And so, all you’re doing is basically giving an endorsement of the continued atrocities that the Burmese military commits by allowing the American oil and gas sector to funnel them money.

AMY GOODMAN: The lifting of the sanctions?

JENNIFER QUIGLEY: Yes. I mean, that’s—that’s one of the things that concerns us the most, is that, you know, as of Friday, President Obama has now lifted every sanction other than those that are symbolic in nature. And so, the signal that this sends is not one of concern for continued human rights abuses and ethnic conflict and the activities of the Burmese military; it’s one where it shows that that is not a significant enough concern to President Obama.

AMY GOODMAN: Peter Popham, the oil companies that will be most interested in getting into Burma right now?

PETER POPHAM: Yes, it’s—it’s got a fantastic potential. It’s full of resources of every sort, including lots of oil and gas. And as Jennifer said, it’s the engagement of the American business community with the regime-dominated oil and gas sector that is a worry for human rights campaigners everywhere, and also for Aung San Suu Kyi, who came down very heavily against that particular move.

AMY GOODMAN: I want to thank you both for being with us. What, at this point, Peter Popham, do you feel needs to happen?

PETER POPHAM: Well, I mean, it’s clear that—that, to some extent, Obama and Aung San Suu Kyi have become sort of disjointed. And I think they get—they need to get back onto the same page, really, because fundamental change has to happen before 2015, when the next elections are scheduled. And by that point, we should see—

AMY GOODMAN: Peter Popham, we’re going to have to leave it there, with Jennifer Quigley. I think you so much. 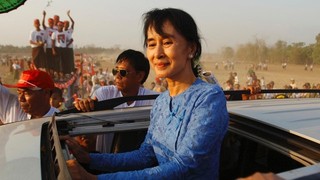