In an excerpt from our extended interview, NSA whistleblower Thomas Drake and Jesselyn Radack of the Government Accountability Project discuss the Obama administration’s unprecedented targeting of government employees who expose illegal behavior, fraud and abuse. Drake describes how he challenged waste, mismanagement and possible constitutional violations at the National Security Agency at a time when “Congress was writing blank checks to the NSA.”

Radack, a former ethics adviser to the Justice Department, explains how she blew the whistle after John Walker Lindh was interrogated without trial in one of the first terrorism cases after 9/11, and her memos raising ethical concerns about his interrogation were purged and not turned over to a criminal court. Radack is currently the director of National Security & Human Rights at the Government Accountability Project, the nation’s leading whistleblower organization.

Click here to see part one of the interview. More of this extended interview will be aired soon on Democracy Now!

AMY GOODMAN: We’re joined right now by Thomas Drake, an NSA whistleblower. We have covered his case, played clips of his speaking. It’s the first time we have him in studio. Jesselyn Radack is also with us. She is his attorney, also director of National Security & Human Rights at the Government Accountability Project, and she’s written a new book called TRAITOR: The Whistleblower and the “American Taliban”.

Well, Jesselyn Radack, talk about whistleblowers today and what is happening to them under the Obama administration, President Obama, who often talks about the importance of democracy and truth telling, and when he ran for president, the—how important transparency was.

JESSELYN RADACK: Yes. In fact, he said that whistleblowers were courageous and patriotic, yet he has led an unprecedented war on whistleblowers. And while whistleblowers have always been retaliated against and harassed unmercifully under prior administrations, this is the first administration to actually start indicting them and doing so under the heavy-handed Espionage Act, which could land them in jail for the rest of their lives. There are six such prosecutions going on right now of people who revealed information that exposed fraud, waste, abuse, illegality and a danger to public health and safety. Tom Drake was the first person among that recent spate of crackdown prosecutions.

AMY GOODMAN: And in a nutshell, Thomas Drake, though we spoke on Democracy Now! about your case, explain what happened, what you did, how you became a whistleblower, and what happened to you.

THOMAS DRAKE: Well, under the Intelligence Community Whistleblower Protection Act, I actually originally had made contact with congressional staffers during the late '90s, interestingly enough, regarding NSA's massive fraud, waste and abuse on certain—on contracts. They were in fundamental violation of Federal Acquisition Regulation. So there had already been, in essence, a pre-existing means by which I was informing Congress regarding what was going on at NSA.

In 2001, though, after 9/11 is when I found out that NSA was in abject violation of, you know, the First Commandment at NSA, which was, you do not spy on Americans without a warrant. And that’s, as James Bamford had pointed out earlier in your segment on Democracy Now!, is because of significant abuse during the ’60s and ’70s under the programs that he mentioned, as well as a number of others—COINTELPRO—where they were actually in violation—without even FISA, but they were in violation of the Fourth Amendment rights of Americans. So, political dissidents, journalists who were not liked by administrations, peace activists, antiwar activists were being spied upon on a routine basis by the intelligence agencies, including NSA, within the United States of America. That led to a whole series of hearings. You know, you had the Watergate, of course. You had, basically, in the Nixon administration: president is above the law, whatever the president says is legal. Never would I have imagined that that would have come full flower post-9/11, and in fact makes the Nixon administration and that whole era look like pikers.

And so, I ended up finding, as I am—because of where I was, I had people coming to me privately with significant concerns about: “What are we doing, Tom, spying on Americans? I thought there was a legal regime that we were supposed to follow. We have a court that we go to in secret, you know, with the probable cause evidence. Yet now we’re just—we’re tossing it overboard, and we’re treating our own country, OK, as the equivalent of a foreign nation for the purpose of dragnet electronic surveillance.” And so, you had that combined with a massive infusion of billions and billions of dollars. Basically, Congress was writing blank checks to NSA. I mean, in fact, I remember being in meetings where they would say, you know, “How big do you want it? And how soon do you want it?” They were just going to write the check. This is even stuff that was well off the program for the record, supplemental funding, significant redistribution of wealth going right into the pockets of many of the defense contractors—the very thing that Eisenhower had warned us about during his farewell address.

So I became a part of a Department of Defense inspector general audit investigation. I was one of the unnamed—I was the unnamed senior official in a hotline complaint that was given to the DODIG in September 2002, signed by Diane Roark, Ed Loomis, Kirk Wiebe and Bill Binney, pointing out the vast waste and fraud being committed by the program called Trailblazer, which at the time was under Hayden’s direction and had become the flagship program for how NSA was going to meet the demands and the challenges of the digital age.

NERMEEN SHAIKH: Jesselyn Radack, can you talk a little bit about working on Thomas Drake’s case and working with whistleblowers, the work that you’ve done?

JESSELYN RADACK: Sure. I thought—I thought, potentially, my work would be over once Obama was elected, and I might not have any more cases. And unfortunately, they have skyrocketed and worsened in many significant ways. Whistleblowers have always faced a litany of retaliation, as I did when I blew the whistle in the case of the American Taliban, John Walker Lindh. For that, I was also a target of a federal criminal investigation and—

AMY GOODMAN: Explain briefly what you did.

JESSELYN RADACK: I blew the whistle on the fact that he was interrogated without counsel. And—

JESSELYN RADACK: John Walker Lindh was the first capture, right after 9/11, in the so-called war on terrorism. He was a young man in Afghanistan, an American citizen. And I was told unambiguously that he had counsel. At the time, I was a Justice Department ethics attorney and had advised against interrogating him without a lawyer and, parenthetically, against torturing him. That advice was disregarded. And then, when it was ordered by the court during criminal prosecution, which I had also advised against, that the emails evidencing that advice had disappeared. I resurrected those emails from my computer and gave them to the media when it appeared to me that they had not been turned over to the court.

AMY GOODMAN: And what happened to him?

JESSELYN RADACK: He ended up pleading guilty to two relatively minor charges and is spending 20 years in jail. He’s about halfway through that right now. The other American who was caught fighting alongside him, Yaser Hamdi, the U.S. litigated his case all the way to the Supreme Court and released him scot-free into Saudi Arabia.

AMY GOODMAN: And so, is there any hope for John Walker Lindh?

JESSELYN RADACK: Unfortunately, I don’t think there is. But if there is any idea that proportionality is part of the penological purpose of how we punish people in this country, one would hope that people will take another look.

NERMEEN SHAIKH: Why is it that John Walker Lindh’s sentence is so disproportionate compared, in particular, to the other military detainee you mentioned, Yaser Hamdi?

JESSELYN RADACK: I think because Hamdi’s case went all the way up to the Supreme Court, and they said, “You need to charge him or let him go.” John Walker Lindh, on the other hand, had made a very controversial confession during his problematic interrogation, and his trial was very soon after. It was set to begin on the one-year anniversary of 9/11, about one mile from the Pentagon. And he ended up taking a last-minute plea bargain. I think there were originally three death counts on him. So 20 years, at the time, seemed like a good deal.

AMY GOODMAN: And so, because he settled, there was no case to go to the Supreme Court.

AMY GOODMAN: And so, talk about your trajectory since then.

JESSELYN RADACK: My trajectory since then is as a whistleblower, like many. I ended up in the wilderness for a number of years, during which time I wrote about these issues as an academic matter. Then I ended up prosecuting qui tam actions for the former congressman, Alan Grayson, alleging—representing whistleblowers alleging reconstruction fraud in Iraq. And after that, once Alan Grayson became congressman, I went to work for the Government Accountability Project, because I have decided to dedicate my life to representing whistleblowers, after what I went through. 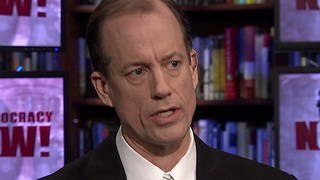