A federal judge has granted class action status to a lawsuit opposing the New York City Police Department’s controversial stop-and-frisk program, opening the door to legal recourse for hundreds of thousands of people targeted by police. The judge’s ruling cited the city’s “deeply troubling apathy” toward the constitutional rights of New Yorkers. A recent study by the New York Civil Liberties Union found the NYPD program is racially skewed and largely ineffective, with blacks and Latinos making up 87 percent of people stopped last year. We speak to Benjamin Jealous, president of the NAACP. [includes rush transcript]

AMY GOODMAN: I wanted to ask you about two stories. In a moment, Houston, but in New York, the latest news that came out this week, a federal judge granting class action status to a lawsuit opposing the New York City Police Department’s controversial stop-and-frisk program, which opens the door to legal recourse to hundreds of thousands of people targeted by police—the judge’s ruling citing New York City’s “deeply troubling apathy” toward the constitutional rights of New Yorkers. We’re talking about something like 700,000 New Yorkers stopped and frisked, overwhelmingly, something like 87 percent, young black and Latino, particularly men.

BENJAMIN JEALOUS: Yeah, you know, we have called for a national march to end stop-and-frisk in New York City on Father’s Day, gathering at 1:00 at Fifth Avenue and 110th Street, stepping off at 2:00, marching past Mayor Bloomberg’s house. It will be a silent march in the tradition that we started in 1917 on 5th Avenue, when there are really grave injustices.

This stop-and-frisk program in New York City is the worst racial profiling program in the country, in any city. The reality is that Mayor Bloomberg has come out with this sorry defense. You know, he says, “Look, you know, we have to do this to make our city safer.” And he’s very proud that he’s dropped violent crime 29 percent. And when he says we have to do this, what he’s talking about is, you know, eight years ago they were doing 170,000 stop-and-frisks in New York City. Ninety percent of the people had absolutely done nothing wrong, and 90 percent of the people, you know, give or take two or three points, were people of color. Last year, it was, as you said, almost 700,000, and again about 90 percent innocent, about 90 percent people of color. How many guns they found: 760 guns. And yet, he says that makes it safer. That’s how he’s pushed crime down 29 percent. What he doesn’t say is that in Los Angeles, violent crime is down 59 percent in the same period. In New Orleans, it’s down 56 percent in the same period. In Dallas, it’s down 49 percent in the same period. In Baltimore, it’s down 37 percent in the same period. But all these cities have dropped violent crime further without using this outrageous program.

And it’s really sad, because Mayor Bloomberg says that he’s investing tens of millions of his own dollars in improving the lives of young black men, but, I’m sorry, there’s absolutely nothing that you can do to make their lives proportionately better, you know, from the harm you’ve done, when you’ve treated them like criminals their entire life, when you have more stop-and-frisks of young black men in New York City than there are young black men in New York City. It’s absolutely terrifying to see a big city mayor, let alone the mayor of the biggest city in our country, the richest person in that city, a media titan, say that we have to engage in racist behavior to make our cities safer. It is a lie. He has done half as good as the mayor of Los Angeles, and that mayor, unlike him, doesn’t use racist tactics. 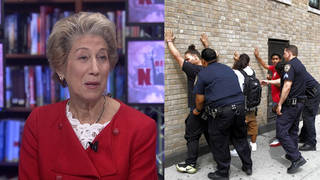