“No NATO, No War”: U.S. Veterans of Iraq and Afghanistan Return War Medals at NATO Summit

We broadcast from Chicago, site of the largest NATO summit in the organization’s six-decade history. On Sunday, veterans of the Iraq and Afghanistan wars, as well as members of Afghans for Peace, led a peace march of thousands of people. Iraq Veterans Against the War held a ceremony where nearly 50 veterans discarded their war medals by hurling them down the street in the direction of the NATO summit. We hear the soldiers’ voices as they return their medals one by one from the stage. “I’m here to return my Global War on Terror Service Medal in solidarity with the people of Iraq and the people of Afghanistan,” said Jason Hurd, a former combat medic who spent 10 years in the U.S. Army. “I am deeply sorry for the destruction that we have caused in those countries and around the globe.” [includes rush transcript]

StoryMar 30, 2015Ex-U.S. Official on Bowe Bergdahl Charges: Why Are We Vilifying an Ex-POW Tortured by Taliban?

AMY GOODMAN: We’re broadcasting from Chicago, site of the largest NATO summit in the organization’s 63-year history. While delegates from 60 nations are meeting in the heavily secured McCormick Place convention center, thousands of antiwar protesters have been in the streets.

On Sunday, protesters marched from Grant Park to near the NATO summit. The march marked the largest protest in a week-long series of actions against the NATO summit. The march was led by veterans of the Iraq and Afghanistan wars as well as members of Afghans for Peace. At the end of the march, Iraq Veterans Against the War held a ceremony where more than 40 veterans discarded their war medals by hurling them in the direction of the NATO summit. Vietnam Veterans staged a similar protest outside the U.S. Capitol in 1971.

On Sunday—former U.S. Army Sergeant Alejandro Villatoro served during the Iraq 2003 invasion and in Afghanistan in 2011.

ASH WOOLSON: No NATO, no war!

VETERANS: No NATO, no war!

ASH WOOLSON: We don’t work for you no more!

VETERANS: We don’t work for you no more!

ASH WOOLSON: We don’t kill for you no more!

VETERANS: We don’t kill for you no more!

ALEJANDRO VILLATORO: At this time, one by one, veterans of the wars of NATO will walk up on stage. They will tell us why they chose to return their medals to NATO. I urge you to honor them by listening to their stories. Nowhere else will you hear from so many who fought these wars about their journey from fighting a war to demanding peace. Some of us killed innocents. Some of us helped in continuing these wars from home. Some of us watched our friends die. Some of us are not here, because we took our own lives. We did not get the care promised to us by our government. All of us watched failed policies turn into bloodshed. Listen to us, hear us, and think: was any of this worth it?

ALEJANDRO VILLATORO: Do these medals thank us for a job well done?

ALEJANDRO VILLATORO: Do they mask lies, corruption, and abuse of young men and women who swore to defend their country?

ALEJANDRO VILLATORO: We tear off this mask. Hear us.

IRIS FELICIANO: My name is Iris Feliciano. I served in the Marine Corps. And in January of 2002, I deployed in support of Operation Enduring Freedom. And I want to tell the folks behind us, in these enclosed walls, where they build more policies based on lies and fear, that we no longer stand for them. We no longer stand for their lies, their failed policies and these unjust wars. Bring our troops home and end the war now. They can have these back.

GREG MILLER: My name is Greg Miller. I’m a veteran of the United States Army infantry with service in Iraq 2009. The military hands out cheap tokens like this to soldiers, servicemembers, in an attempt to fill the void where their conscience used to be once they indoctrinate it out of you. But that didn’t work on me, so I’m here to return my Global War on Terrorism Medal and my National Defense Medal, because they’re both lies.

SCOTT KIMBALL: My name is Scott Kimball. I’m an Iraq war vet. And I’m turning in these medals today for the people of Pakistan, Iraq, Palestine, and all victims of occupation across the world. And also, for all the servicemembers and veterans who are against these wars, you are not alone!

CHRISTOPHER MAY: My name is Christopher May. I left the Army as a conscientious objector. We were told that these medals represented, you know, democracy and justice and hope and change for the world. These medals represent a failure on behalf of the leaders of NATO to accurately represent the will of their own people. It represents a failure on the leaders of NATO to do what’s right by the disenfranchised people of this world. Instead of helping them, they take advantage of them, and they’re making things worse. I will not be a part of that anymore. These medals don’t mean anything to me, and they can have them back.

MAGGIE MARTIN: My name is Maggie Martin. I was a sergeant in the Army. I did two tours in Iraq. No amount of medals, ribbons or flags can cover the amount of human suffering caused by these wars. We don’t want this garbage. We want our human rights. We want our right to heal.

JACOB CRAWFORD: I’m Jacob Crawford. I went to Iraq and Afghanistan. And when they gave me these medals, I knew they were meaningless. I only regret not starting to speak up about how silly the war is sooner. I’m giving these back. Free Bradley Manning!

JASON HURD: My name is Jason Hurd. I spent 10 years in the United States Army as a combat medic. I deployed to Baghdad in 2004. I’m here to return my Global War on Terrorism Service Medal in solidarity with the people of Iraq and the people of Afghanistan. I am deeply sorry for the destruction that we have caused in those countries and around the globe. I am proud to stand on this stage with my fellow veterans and my Afghan sisters. These were lies. I’m giving them back.

STEVEN LUNN: My name is Steven Lunn [phon.]. I’m a two-time Iraq combat veteran. This medal I’m dedicating to the children of Iraq that no longer have fathers and mothers.

SHAWNA FOSTER: My name is Shawna, and I was a nuclear biological chemical specialist for a war that didn’t have any weapons of mass destruction. So I deserted. I’m one of 40,000 people that left the United States Armed Forces because this is a lie!

STEVE ACHESON: My name is Steve Acheson. I’m from Campbellsport, Wisconsin. I was a forward observer in the United States Army for just under five years. I deployed to Sadr City, Iraq, in 2005. And I’m giving back my medals for the children of Iraq and Afghanistan. May they be able to forgive us for what we’ve done to them. May we begin to heal, and may we live in peace from here until eternity.

MICHAEL THURMAN: Hello. My name is Michael Thurman. I was a conscientious objector from the United States Air Force. I’m returning my Global War on Terrorism Medal and my military coins on behalf of Private First Class Bradley Manning, who sacrificed everything to show us the truth about these wars.

MATT HOWARD: My name is Matt Howard. I served in the United States Marine Corps from 2001 to 2006 and in Iraq twice. I’m turning in my campaign service—Iraq Campaign Service Medal and Global War on Terror Service and Expeditionary Medals for all my brothers and sisters affected with traumatic brain injury, military sexual trauma and post-traumatic stress disorder.

ZACH LAPORTE: My name is Zach LaPorte, and I’m an Iraq war veteran from Milwaukee, Wisconsin. Thank you. I’m giving back my medals today because I feel like I was duped into an illegal war that was sold to me on the guise that I was going to be liberating the Iraqi people, when instead of liberating the people, I was liberating their oil fields.

SCOTT OLSEN: My name is Scott Olsen. I have with me today—today I have with me my Global War on Terror Medal, Operation Iraqi Freedom Medal, National Defense Medal and Marine Corps Good Conduct Medal. These medals, once upon a time, made me feel good about what I was doing. They made me feel like I was doing the right thing. And I came back to reality, and I don’t want these anymore.

TODD DENNIS: My name is Todd Dennis. I served in the United States Navy. I have PTSD. I’m returning my Navy and Marine Corps Achievement Medal because it was given to me, according to my letter, because of hard work and dedication and setting the example. I was a hard worker because I buried my PTSD and overworked myself in the military. And I’m throwing this back and invoking my right to heal.

MICHAEL APPLEGATE: My name is Michael Applegate. I was in the United States Navy from 1998 to 2006. And I’m returning my medal today because I want to live by my conscience rather than being a prisoner of it.

NATE: My name’s Nate. I served in the U.S. Navy from ’99 to 2003 and participated in the invasions of Iraq and Afghanistan. I was wrong to sign myself up for that. I apologize to the Iraqi and Afghani people for destroying your countries.

BROCK McINTOSH: My name is Brock McIntosh. I was in the Army National Guard and served in Afghanistan from November '08 to August ’09. Two months ago, I visited the monument at Ground Zero for my first time with two Afghans. A tragic monument. I'm going to toss this medal today for the 33,000 civilians who have died in Afghanistan that won’t have a monument built for them. And this is for the Afghan Youth Peace Volunteers.

AMY GOODMAN: Members of Iraq Veterans Against the War throwing away their war medals outside the NATO summit here in Chicago. This is Democracy Now!, democracynow.org, The War and Peace Report. Back in a minute. 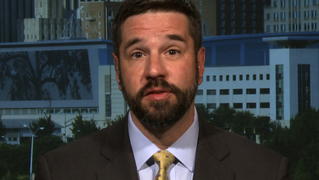 Ex-U.S. Official on Bowe Bergdahl Charges: Why Are We Vilifying an Ex-POW Tortured by Taliban?