Re: Request for investigation into the death Kenneth Chamberlain, Sr.

This office, along with Mayo Bartlett, Esq. and Abdulwali Muhammad, Esq., represents the Estate of the late Kenneth Chamberlain, Sr. The purpose of this letter is to request that the United States Department of Justice undertake a criminal investigation into the conduct of certain members of the White Plains Police Department (the “WPPD”) whose actions caused the untimely death of Mr. Chamberlain on November 19, 2011. We believe an investigation will reveal that WPPD officers acted in contravention of Mr. Chamberlain’s constitutional rights secured under 18 USC §§241,242 and that the patterns and practices of the WPPD have deprived persons, including Mr. Chamberlain, of rights protected by the Constitution and laws of the United States secured under 42 U.S.C. §14141 and 42 U.S.C. § 12131, et seq. and 29 U.S.C. § 794. In particular, we believe that Mr. Chamberlain and others have been subjected to, inter alia, the misuse of excessive and/or deadly force, discriminatory harassment based on race and disability, and the use of racial slurs by WPPD officers.

On November 19, 2011, at approximately 5:00 a.m., Mr. Chamberlain accidentally activated his medical alert alarm provided by Life Alert. Life Alert contacted the White Plains Department of Public Safety. When police and emergency medical personnel were dispatched to Mr. Chamberlain’s apartment building he advised them that he was fine, did not require assistance, and did not want to allow them into his apartment. Much of what occurred thereafter has been memorialized on an audio recording by the medical alert company and a Taser video captured by one of the officers at the scene. In sum, these recordings recount an ordeal that stretched for over one hour while numerous police officers, who were positioned outside Mr. Chamberlain’s apartment, continuously banged on his door, taunted and laughed at him, used racial slurs against him, and denied his family members access to him. We have copies of these recordings and the WPPD investigative files and will provide them upon request.

The actions of the WPPD officers were particularly egregious because they were aware at the time they responded to the medical alert call that Mr. Chamberlain had a serious medical condition and emotional disabilities. It is also clear from the medical alert company’s recording of the events that the actions of the police officers outside of Mr. Chamberlain’s apartment caused him to become increasingly agitated, delusional and fearful for his life. What began as a mistaken emergency medical alert call, ended with Mr. Chamberlain’s door being broken down and him being subjected to a series of bungled Taser shots, bean bag shot gun blasts, and, finally, a fatal gunshot to the chest.

On May 3, 2012, a Grand Jury convened by the Westchester County District Attorney found that, based on the information presented, there was not reasonable cause for a criminal indictment against any of the WPPD officers involved, including Anthony Carelli, the officer who took the fatal shot at Mr. Chamberlain. We note that, over our strenuous objection, the information presented to the Grand Jury came from an investigation conducted solely by the WPPD.

In the course of our preliminary investigation, we learned that several of the officers involved in the events leading up to Mr. Chamberlain’s death have been involved in other incidents with similar allegations of misconduct and discriminatory policing. We will gladly provide this information upon request to assist the Department of Justice with its investigation(s).

We request the opportunity to meet with you to discuss the concerns of the Chamberlain family and the need for an immediate federal investigation of the circumstances of Kenneth Chamberlain Sr.’s death and the urgent need for immediate reforms and improvements to the practices of the WPPD.

Thank you in advance for your consideration of this matter. 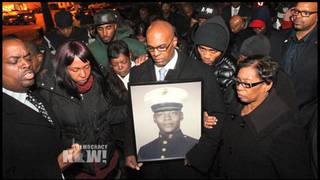