Army Pvt. Danny Chen allegedly took his own life in Afghanistan after he was abused by his fellow soldiers and superiors on an almost daily basis in what has been described as racial hazing. On Tuesday, Chen’s sergeant, Adam Holcomb, was found not guilty of negligent homicide but sentenced to 30 days in a military jail for lesser charges. Holcomb was the first of eight soldiers court-martialed in Chen’s death. We’re joined by two guests who have just returned from watching Sgt. Holcomb’s court-martial: Elizabeth OuYang, a Chen family spokesperson, president of the civil rights organization OCA-New York, and advocate for victims of hate crimes and fair media representation of Asian Americans; and Julia Chung, a Vassar College senior volunteering for the group Justice for Private Danny Chen. [includes rush transcript]

AMY GOODMAN: We turn now to a major development in the case of Army Private Danny Chen, who allegedly took its own life just weeks after he was deployed to Afghanistan last October. He was 19 years old. Chen’s family says he was abused by his comrades and his superiors on an almost daily basis, including racist hazing, with soldiers throwing rocks at him, calling him ethnic slurs and forcing him to do push-ups or hang upside down with his mouth full of water.

On Tuesday, the first of eight U.S. soldiers court-martialed in Chen’s death was sentenced to just 30 days in a military jail. Sergeant Adam Holcomb will also be allowed to remain in the service. On Friday, he was found not guilty on the most serious offense of negligent homicide, but was convicted on lesser charges.

This is Major Josh Toman, spokesperson for the XVIII Airborne Corps.

MAJOR JOSH TOMAN: He was a sergeant, so now he’s been reduced out of the non-commissioned officer ranks, and he was also—a fine was imposed of $1,181.55 per month for one month and 30 days of confinement. And that was what the panel returned. As the judge instructed them, they have discretion to anything from no punishment up to the maximum, a dishonorable discharge, two years and confinement and total forfeitures. And that’s what the panel arrived at based on their view of the evidence.

NERMEEN SHAIKH: During the court-martial, the prosecutor showed pictures of Private Chen with a bruised lower back and a number of scratches from when Holcomb pulled him off the top of a bunk bed and Chen fell to the floor. Holcomb had also been accused of dragging him outside over rocks.

Well, for more, we’re joined now by two people who have just returned from watching Sergeant Holcomb’s court-martial. Elizabeth OuYang has served as a spokesperson for Private Danny Chen’s parents. She is president of OCA-New York, a civil rights organization where she advocates for victims of hate crimes and fair media representation for Asian Americans. Also with us is Julia Chung, a volunteer working on Justice for Private Danny Chen. She’s an incoming senior at Vassar, where she’s a sociology major.

Welcome, both of you, to Democracy Now! Liz OuYang, can you talk a little bit about the significance of the acquittal on the most serious charge of negligent homicide?

AMY GOODMAN: What’s happening with the others? How many people have been charged? Holcomb gets what? Thirty days in jail?

ELIZABETH OUYANG: Yes, 30 days in jail, and more egregiously, he’s allowed to remain in the military. Asian-American parents are going to be petrified to send their sons and daughters to serve in the Army with a sergeant who has been convicted of racial treatment. And there were eight soldiers charged in connection with his death. We still have four more soldiers who have also been charged with negligent homicide, plus two of the higher-ranking officers who were aware of what happened to Danny Chen and did nothing to stop it.

AMY GOODMAN: Julia, what were you most struck by as you watched this court-martial?

JULIA CHUNG: I think what I was most struck by was the lack of awareness about Asian-American issues that the—even the defense attorneys had and the lower-ranking PFCs had, because when the witness was on testimony, one of the witnesses said, “Oh, 'gook,' that’s a common term for Asian Americans.” And I was completely surprised.

AMY GOODMAN: Who was that?

JULIA CHUNG: He was a medic for—he was the medic who treated Private Danny Chen’s back. And he said that, “Oh, that’s a common name, right?” He agreed that saying “chink” was inappropriate, but saying words like “dragon lady” and “fortune cookie” and “egg roll” was OK. And it was just surprising—

JULIA CHUNG: Right, because they said that it was just a nickname. And I was extremely surprised by the fact that, while he himself never called him that because he realized that it was wrong, but the higher-level NCOs, they would—they were OK with calling it. So it was really just surprising to hear that.

ELIZABETH OUYANG: It’s still unclear. You know, we have enlisted the help of Dr. Henry Lee, world-renowned forensic expert, to help us.

ELIZABETH OUYANG: Former medical examiner. And, you know, it’s still—in our minds and the minds of the parents, you know, we’re not—we’re not sure.

AMY GOODMAN: We will continue to follow this story. I want to thank you, Liz OuYang, president of OCA, which is the Organization of Chinese Americans. Also, thank you to Julia Chung for being with us. 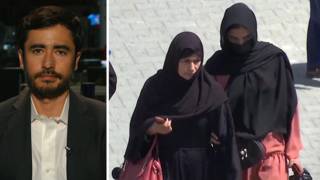