Three members of the feminist punk group Pussy Riot have been sentenced to two years in prison for staging an anti-Putin protest inside a Russian church. On February 21, several members of Pussy Riot rushed before the altar of Moscow’s Cathedral of Christ the Saviour where they danced, genuflected and issued a “punk prayer,” exhorting the Virgin Mary to “get Putin out.” Three group members have been behind bars for five months, and their imprisonment for the peaceful protest has sparked a massive outcry around the world, with protests taking place today in dozens of cities. Speaking to Democracy Now!, a representative for Pussy Riot’s legal defense team called the case a “political put-up job.” “It’s impossible to understand for people living in democracy how it is possible to live in the system of disregard of the law,” said Alisa Obraztsova, an assistant to the lawyers representing Pussy Riot. “[The] only way is to believe the society and not the government, because there is no common sense in such legal trials, and only the society’s reaction may describe the real situation in Russia.” Obraztsova said they plan to appeal first in Russia and then to the European Court of Human Rights. As protesters were arrested outside the courthouse in Moscow, we speak with JD Samson, a punk rock musician with the bands Le Tigre and MEN who has been organizing Pussy Riot solidarity actions in New York City. “As a feminist musician, as well, you know, we’re all interested in freedom of expression, and, as artists, we can all stand behind them,” Samson says. “Russia clearly has no separation of church and state, and this is something that has been definitely important for us to think about.” [includes rush transcript]

JUAN GONZÁLEZ: We turn now to breaking news in Russia, where three members of the feminist punk group Pussy Riot have just been found guilty of hooliganism for staging a peaceful protest against Russian leader Vladimir Putin inside an Orthodox church. As we go to broadcast, the verdict in a case that’s drawn widespread attention from around the world is still being read in court, and the sentence has not yet been announced.

On February 21st, five members of Pussy Riot rushed before the altar of Moscow’s Cathedral of Christ the Saviour. They genuflected, danced and issued a punk prayer, exhorting the Virgin Mary to get Putin out.

AMY GOODMAN: That was Pussy Riot’s “Punk-Prayer” with video footage, for our TV listeners, from the church protest. Well, three young women accused of participating in that protest have just been found guilty. They’ve already been in jail for five months. Their names are Nadia Tolokonnikova, Katja Samutsevich and Masha Alyokhina. The case was seen as a key test of how far Russian leader Vladimir Putin might go to crack down against protesters.

The three jailed performers drew admiration from around the world, with activists and musicians, including Madonna, Paul McCartney, Red Hot Chili Peppers, showing their support. In fact, the outcry was reportedly so intense, the judge giving today’s verdict was placed under state protection after officials say she received threats.

JUAN GONZÁLEZ: Protest actions in support of Pussy Riot were scheduled to kick off today in some three dozen cities around the world, including here in New York.

Well, for more on Pussy Riot, we’re joined in New York by JD Samson, a feminist punk musician with the bands Le Tigre and MEN. She’s been organizing events in support of Pussy Riot here in New York.

JD SAMSON: How are you guys?

AMY GOODMAN: It’s great to have you with us. So, tell us about Pussy Riot, who they are, who the women are who are now in jail, and the significance of this guilty verdict—the sentences being read as we are broadcasting right now.

JD SAMSON: Right. I mean, obviously, for myself being a part of an activist, feminist, you know, political band for the past 10 years, it’s close to home for me. So, for the past, you know, six months I’ve been trying to organize both shows in Russia and here in the States. And last night, we held a reading of all of the texts that the women have put out, both in the statements on the trial as well as their lyrics to the songs, which has been—was really incredible. We had artists read them last night, and a lot of people showed up. Today, there’s rallies all over New York, from churches to Times Square. And clearly, we’re all very upset about the verdict which was read just a short time ago, so…

AMY GOODMAN: Democracy Now! spoke on Wednesday with Alisa Obraztsova, an assistant to the lawyers representing Pussy Riot. She said the defense team believes the case against Pussy Riot is politically motivated.

ALISA OBRAZTSOVA: We understand very well that this case is a political put-up job, and all the decisions concerning this protest and the arrest of the girls were made by people who are high up in the civil service. We are more than sure that all the sanctions for all the actions concerning Pussy Riot were given by Putin or someone very close to him.

We wanted to ask Americans not to cherish an illusion about Russia. Unfortunately, American people will never understand how the legal trial may ignore all prepositions of law in Russia. And it’s impossible to understand for people living in democracy how it is possible to live in the system of disregard of the law. Only way is to believe the society and not the government, because there is no common sense in such legal trials, and only the society’s reaction may describe the real situation in Russia, in general, and according this court.

AMY GOODMAN: That was Alisa Obraztsova, representing Pussy Riot’s legal defense team, speaking to Democracy Now! from Moscow. She’s in the courtroom right now, and we are getting reports that people who are protesting outside are being arrested. Juan?

JUAN GONZÁLEZ: Well, I wanted to ask you, if possible, to read some of the lyrics of the song that they sang in the church that has led to their arrest and now this trial.

Black robe, golden epaulettes
All parishioners crawl to bow
The phantom of liberty is in heaven
Gay-pride sent to Siberia in chains

The head of the KGB, their chief saint,
Leads protesters to prison under escort
In order not to offend His Holiness
Women must give birth and love

AMY GOODMAN: We are showing now, for our TV viewers, live pictures of the verdict, and people can go online at democracynow.org. We also just read a tweet: Russian opposition leader Garry Kasparov has been arrested outside the Pussy Riot court. Why has this resonated like it has throughout the world?

JD SAMSON: I think a lot of reasons. One of them is that, you know, feminism is in a new wave, I believe. And I think that people have been kind of been—you know, there’s been things inching up, all these conversations about abortion and all these new laws happening this year, and I think we’re just kind of at the top of this. And I think that as a feminist musician, as well, you know, we’re all interested in freedom of expression, and, as artists, we can all stand behind them, whether we’re Madonna, Yoko Ono, you know, or Sting or Paul McCartney. So, I think it’s just been a really incredible moment.

Also, Russia clearly has no separation of church and state, and this is something that, you know, has been definitely important for us to think about. These women aren’t allowed to say the word “feminist.” “Feminist” is a swear word. When asked in court what a feminist was, the judge said, “We don’t need to answer that question.” So, these are all things that shock feminists all around the world.

JUAN GONZÁLEZ: And the impact on artists, especially in Russia, but around the world, of this band standing up to this authoritarian government?

JD SAMSON: Yeah, I think one of the things that’s really strong for everyone is that they are staying so incredibly confident and strong. They’re standing there with their hands in handcuffs in a cage smiling, because they know that what they’ve done is ignite a fire in the rest of the world, and they’re extremely happy to have done so. And, yeah.

AMY GOODMAN: And people can go to our website at democracynow.org to see them standing in that cage. We’re showing live footage from the courtroom in Moscow. Again, the verdict has come down: it’s guilty. The sentencing is being read as we are broadcasting. They face up to seven years in prison. They’ve already been in jail for five months, the group Pussy Riot.

JD Samson, with the feminist punk musician band Le Tigre and MEN, thanks so much for being with us.

JD SAMSON: Thanks for having me.

AMY GOODMAN: And we will let people know the latest verdict and sentencing online at democracynow.org. 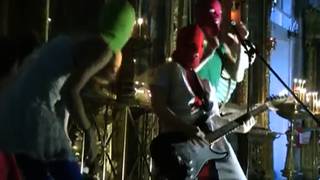