Wisconsin Gov. Scott Walker survived a historic recall election in June, one year after he launched a controversial effort to slash bargaining rights for the state’s public sector workers and reduce their benefits. The recall effort was the first election since the Citizens United ruling, which opened the floodgates for unlimited corporate spending on election campaigns. Analysts say the ruling helped Walker outspend his opponent, Milwaukee Mayor Tom Barrett, seven to one. Ahead of the Republican National Convention, which he is expected to address Tuesday, Walker was interrupted at a celebration of the Faith and Freedom Coalition by protesters who chanted “Walker hates workers!” [includes rush transcript]

AMY GOODMAN: This is Democracy Now!, democracynow.org, The War and Peace Report. We’re “Breaking With Convention: War, Peace and the Presidency,” on the road in Tampa, Florida, covering the Republican National Convention two—every day, two hours of coverage from here in Tampa. Then we move on to Charlotte for the Democratic National Convention. I’m Amy Goodman, as we turn from Mitt Romney to another politician who’s received key backing from the billionaire brothers, Charles and David Koch.

Wisconsin Governor Scott Walker survived a historic recall election in June one year after he launched a controversial effort to slash bargaining rights for the state’s public sector workers and reduce their benefits. The recall effort was the first election since the Citizens United ruling, which opened the floodgates for unlimited corporate spending on election campaigns. Analysts say the ruling helped Walker outspend his opponent, Milwaukee Mayor Tom Barrett, seven to one.

Well, on Sunday, Walker was here in Tampa, ahead of the Republican National Convention, which he’s expected to address on Tuesday. On Sunday, he spoke at a celebration of the Faith and Freedom Coalition, a conservative 501(c)(4) that’s claimed credit for bolstering Walker’s recall campaign with hundreds of thousands of voter contacts. Moments after Governor Walker took to the podium at the Tampa Theater, he was interrupted by protesters who chanted “Walker hates workers!” They unfurled two banners. One read, “Walker hates working families,” and another said, “Walker has a Koch problem.” That’s K-O-C-H, referring to the billionaire brothers who have backed Walker.

GOV. SCOTT WALKER: It is good to see that we’re among some friends here.

DANIELLE VILLARREAL: My name is Danielle Villarreal. I’m here from Chicago to protest at the RNC. Well, in this action in particular, we waited for Governor Walker to come up to speak, and we unfurled a banner which said, “Walker has a Koch problem.” Koch spelled K-O-C-H.

TYLER MITCHELL: K-O-C-H as in the infamous Koch brothers. Banner drops were done to raise awareness on the fact of the Koch brothers funding politicians to get in office and using that—those politicians to try to bust the unions so that their corporations have more control over our government.

DANIELLE VILLARREAL: We got it out, we tied it up, and—after having a series of people also serve as distractions down beneath. And we were immediately escorted out by the police. I have seen a lot of towns go under, that were manufacturing towns, including ones like Milwaukee, where I did a lot of work on the Walker-Barrett campaign recently. And basically, Walker represents this union-busting figure in the United States, which is completely wrong. It’s completely wrong to say that unions are somehow like the bane of society, when in fact they are the backbone. And we need folks like that. We need unions as a strong position in U.S. culture to fight for the working people, because politicians like Walker are not only not representing the people, they don’t have working people’s best interests at heart.

AMY GOODMAN: The protesters disrupted his speech on Sunday. Wisconsin Governor Scott Walker’s supporters responded with chants of “U.S.A.! U.S.A.!” As the protesters were escorted out and temporarily detained by police, Walker began his speech again.

GOV. SCOTT WALKER: Freedom is endowed by our creator, defined by our Constitution, protected each and every day by the men and women who wear the uniform of this great country. And those men and woman who fought so hard fought so that everyone, whether they agreed or disagreed with us, could have a voice, but they also expected that people would do it respectfully. And that’s why it’s such an honor to be with you here today.

You know, I was asked many times, not just since the recall election on June 5th, but many times before, “How do you, Tonette and your boys, Matt and Alex, deal with all the grief?” You just got a little sample of that a second ago, but we had that for about 18 months. I had a thousand people—one night, a thousand people bust in in front of my home in Wauwatosa, not the governor’s residence, but the home, where my kids still went to school last year, a public school in Wauwatosa, where we live on a busy street in Wauwatosa. They said, “How do you deal with that? How do you deal with the attacks and the bitterness and all those sorts of things?” I said, “You know what? For every one of them, there’s nine- or 10-fold others that come up to me, not just at political events, not just at rallies, but at factories and farms and small businesses in my state, and you know what they say? One of the most amazing things to me was, again, not just at those rallies, but at those everyday farms and factories and small businesses in our state, where I’d get someone who’d come right off the line and say, 'Governor, me and my family, we pray for you.'” And that made all the difference in the world. And for all of you who did that here, we say thank you. We say thank you.

You know, a year-and-a-half ago, when I first took the oath of office on June—or, January 3rd of 2011, I raised my hand as the 45th governor of the great state of Wisconsin. And little did I know, but at that point I had moved the swearing in from the east wing, where there was a bust of La Follette, and I moved it around the corner, not because of La Follette—well, maybe a little bit—but around the corner, and I moved it to the wing next door. And the reason I did was simple. That’s where the Constitution of the state of Wisconsin stood. And I invoked a part of our constitution that’s never been altered, never been amended. It’s called the frugality clause. And I referenced in that document what I believe was the proper role of government—not Republican or Democrat, not conservative or liberal or somewhere in between, but the proper role of government in our lives. And I said simply this: “Moderation and frugality in government leads to freedom and prosperity for our people.” Now, little did I know how prophetic that would be over the next year and a half. But that’s what this is all about. And the reason I knew we would ultimately prevail on June 5th was the same reason I believe we’ll prevail not just nationally but in state upon state upon state on November 6th. And it’s simple. It’s who we are as Americans. It’s what we do when times are tough.

AMY GOODMAN: That was Wisconsin Governor Scott Walker speaking Sunday at the Faith and Freedom Coalition celebration inside the Tampa Theater. 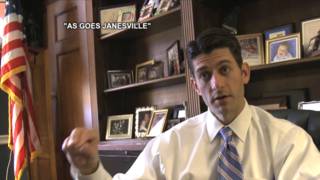