AMY GOODMAN: Also speaking at Sunday’s event was former House speaker and former Republican presidential contender Newt Gingrich. Much of his speech focused on the issue of abortion. He said Obama is, quote, “the most extreme pro-abortion president in U.S. history.”

NEWT GINGRICH: …tell you why I feel so passionately about this election and why, frankly, it didn’t take me very long after I suspended the campaign to decide that I would do everything I could to elect Mitt Romney and everything I could to get a Republican House and Senate. And it’s pretty simple: I believe Barack Obama is a direct threat to the survival of the country I grew up in.

Now, let me take a couple examples, because the elite media doesn’t want to deal with any of these things. And so, let me take a couple examples. The media has been fascinated for two weeks about abortion. Well, I have a challenge to them. Next week in Charlotte, read the Democratic Party platform, which in effect calls for abortion on demand, including late-term abortion paid for by the taxpayer. That is the most extreme position in America today, and it’s held by the Democratic Party. I challenge the elite, take a look at Obama’s position as a state senator, when the Born-Alive Infant Protection Act came up three times, and three times he stood out as uniquely, deeply committed to the killing of unborn children in a way that virtually nobody—in the U.S. Senate, it was unanimous in favor of this act, but not with Barack Obama, who was deeply on the side of those who perform abortions. He is the most extreme pro-abortion president in American history.

So let’s—let’s talk about extremism a little bit, since this—the media loves the term “extremist,” and then they apply it only to one side. So let’s talk a little bit more about extremism. In New York City in 2010, there were 12,139 abortions among teenagers and 7,207 live births. That means 63 percent of the pregnancies among teenagers in New York City ended up in murder, the killing of unborn life. Now, I think that’s a topic we ought to have the guts to talk about. And we ought to say to our friends on the other side who are so eager to defend Planned Parenthood, which in 2010 got over $400 million as the largest abortion provider in America—let’s talk about what is an extreme position. And I would say those who are callous about babies and callous about life ought to be forced to bear the burden of their callousness and their indifference. And I would say to any pro-life American anywhere in America, of any ethnic background, if you truly care about the unborn, your only possible position this fall is to elect Mitt Romney and Paul Ryan, because they are committed to the right future.

AMY GOODMAN: That was former House speaker and former Republican presidential candidate Newt Gingrich. Earlier in the day, Democracy Now!'s Deena Guzder and Amy Littlefield caught up with Newt Gingrich at the Sacred Heart Catholic Church in Tampa, where he attended Sunday mass. They asked Gingrich about his recent comments calling Obama a “food stamp president.” They also asked about Missouri congressmember and Senate candidate Todd Akin's recent claim that women’s bodies can prevent pregnancies in cases of what Akin called “legitimate rape.” But they began by asking Gingrich about Romney’s stance on abortion. Let’s go to that clip.

NEWT GINGRICH: I think the difference between Romney and Ryan and Obama and Biden is extraordinary. Obama is the most aggressively pro-abortion president in history. His position as a state senator on doctors killing babies that were born alive is astonishing. You look at the Democratic Party platform, which is essentially for taxpayer-funded partial birth abortions on demand. It’s pretty hard for me to see how anybody who is right-to-life could have any question about which ticket would be better.

DEENA GUZDER: But Romney believes in exceptions for rape and incest.

NEWT GINGRICH: But the difference between where Romney is and where Obama is is night and day. I don’t see how any reasonable person can suggest that there will not be dramatically more abortions under Obama than there would be under a Romney-Ryan administration, so—

DEENA GUZDER: Was Todd Akin unfairly targeted? Did he really say anything that controversial?

AMY LITTLEFIELD: Do you think he was unfairly targeted for his comment about legitimate rape?

NEWT GINGRICH: I just—I’ll just say that I think it’s fascinating that the news media doesn’t want to look at—and I’m going to talk about this at the Freedom Forum this afternoon, the Faith and Freedom Forum—the news media doesn’t want to look at, for example, the fact that there are now more abortions than live births in New York City among several groups. Literally. And more babies are killed. Yeah, so, when we talk about this whole Democratic Party effort, it’s totally one-sided. And I’d love to see the news media cover the Democratic Party platform on this topic.

AMY LITTLEFIELD: What did you feel about the concept of forcible rape? Do you feel that he was unfairly criticized?

NEWT GINGRICH: I’m not getting into that.

DEENA GUZDER: And you called Obama the “food stamp president,” but didn’t Jesus say, Sermon on the Mount, support the poor, support those in need?

NEWT GINGRICH: Sure, and—but I believe in support.

DEENA GUZDER: How do you reconcile—

NEWT GINGRICH: I believe in supporting them.

DEENA GUZDER: Would Jesus have given food stamps?

AMY LITTLEFIELD: And do you believe rape victims should be forced to carry their pregnancies to term?

AMY GOODMAN: The last question, Democracy Now!’s Amy Littlefield questioning former House speaker and presidential candidate Newt Gingrich. He refused to answer that question. Earlier, you also heard Democracy Now! producer Deena Guzder. Gingrich and Wisconsin Governor Scott Walker both spoke later Sunday at a celebration of the Faith and Freedom Coalition, which has launched a massive push to get conservative religious voters to the polls in November. 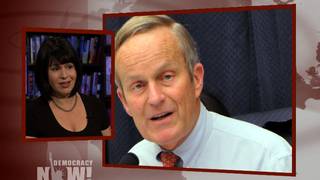