Occupy Wall Street protesters are converging in the Financial District in Manhattan to mark the first anniversary of the movement’s beginning. Similar protests are taking place in dozens of cities today.
On Sept. 17, 2011, thousands of people answered the call originally put out by the Canadian-based magazine “Adbusters” to occupy Wall Street. Protesters slept in Zuccotti Park for nearly two months before the New York City police raided the encampment. We look back at some of Democracy Now!'s earliest coverage of the movement. We interview Rage Against the Machine guitarist Tom Morello at Sunday's anniversary concert in New York City’s Foley Square, and get a live update on the action unfolding today in the streets with Citizen Radio’s Allison Kilkenny. [includes rush transcript]

AMY GOODMAN: Occupy Wall Street protesters are converging in the Financial District in Manhattan today to mark the first anniversary of the movement’s beginning. Similar protests are taking place in dozens of cities.

On September 17th, 2011, thousands of people answered the call originally put out by the Canadian-based magazine Adbusters to occupy Wall Street. Protesters slept in Zucotti Park for nearly two months before the New York police raided the encampment. The September 17th action inspired over a thousand other Occupy protests and encampments around the world. The Occupy movement is largely credited for reframing the national dialogue on economic inequality and popularizing the phrase “We are the 99 percent.”

We begin today’s show looking back at some of Democracy Now!’s earliest coverage of the movement.

JUSTIN WEDES: I think the purpose of September 17th, for many of us who are helping to organize it and people who are coming out, is to begin a conversation, as citizens, as people affected by this financial system in collapse, as to how we’re going to fix it, as to what we’re going to do in order to make it work for us again.

SAM ALCOFF: On Saturday, thousands of protesters took to the streets of downtown Manhattan for what was described as an action to occupy Wall Street.

MARY ELLEN MARINO: I came because I’m upset with the fact that the bailout of Wall Street didn’t help any of the people holding mortgages. All of the money went to Wall Street, and none of it went to Main Street. Now, we’ve just learned that Geithner was actually asked to split up the Citibank, and he didn’t do it. And Obama didn’t do anything about it.

SAM ALCOFF: The plan wasn’t simply for a one-day protest, but an ongoing and creative occupation of the Financial District itself. Organizer Lorenzo Serna.

LORENZO SERNA: The idea is to have an encampment. Like, this isn’t a one-day event. Like, we’re hoping that people come prepared to stay as long as they can and that we’re there to support each other.

DAVID GRAEBER: People have to, like, go into their public squares, meet each other, start talking to each other, and start brainstorming of ideas. I mean, essentially, the idea is the system is not going to save us; we’re going to have to save ourselves. So, we’re going to try to get as many people as possible to camp in some public place and start rebuilding society as we’d like to see it.

AMY GOODMAN: Well, this weekend, hundreds of people from around the country gathered in New York City to mark the anniversary with three days of events. Occupy protesters have vowed to stage a number of direct action protests beginning in the Financial District this morning. Police began making arrests this morning just before we went to broadcast. Another 50 Occupy protesters were arrested over the weekend.

We’ll get updates from the streets in a moment, but first, on Sunday, protesters gathered in Foley Square for a concert to remember Occupy’s one-year anniversary. They broke out into song and dance when musician Tom Morello took the stage, the former lead guitarist of the band Rage Against the Machine and one of the movement’s earliest supporters. Democracy Now! spoke to Tom Morello and other Occupy participants.

TOM MORELLO: Well, I’ve been a supporter of Occupy Wall Street almost since its inception. I played here in the first two weeks of when it was at Zuccotti Park, came back for the May Day resurgence. And whenever Occupy rears its head, I will be there to support.

I think it’s up for us to come up with new strategies, new strategies of action to empower those who felt that first spark, that first radical spark, because the thing that’s—I think was new and exciting for me, as someone who’s been an activist for 20 years, that what different about the Occupy movement, was it was a brand new generation of people who had never been involved in any sort of protest or even charity work, because the—because the corporate malfeasance that caused the global economy to collapse has affected everyone.

And one thing that—where Occupy has been, I think, tremendously successful is highlighting the grotesque economic inequality that exists in our country and around the world. The dirty five-letter word “class” that was considered unutterable until the Occupy movement is now on everyone’s lips.

CHRIS KASPER: Hi, my name’s Chris Kasper, and I’m with Strike Debt. Basically, we’re a group that’s addressing the problems of debt. Right now, my total student debt is just over $145,000. The traditional political parties don’t seem to be offering anything about any kind of debt relief or debt forgiveness, unless it’s for the banks. Like, nobody’s really even talking about it. So one of the things that we’ve started doing here in Occupy is holding debtors assemblies. Strike Debt has been holding debtors assemblies at Washington Square Park. We usually meet on Sundays at noon. And it started with just having assemblies and having people come out and speak out publicly about their debt and sort of like letting go of the shame of the debt.

RAE ABILEAH: Rae Abileah with CODEPINK Women for Peace. CODEPINK joined up with a coalition of groups marching against the specter of fracking pipeline here in New York City, and it was a large Occupy protest parade. And we decided to do a “bust up banks” action outside of Bank of America on Union Square to connect the dots between the pipeline and the big banks that are financing it. We had about two dozen bras to throw in the air. And right as we were mic-checking and getting ready to toss our bras in the air and then be on our merry way and continue the march to Foley Square, a cop just walked over, grabbed my arm and started arresting me for no reason. We were arrested for disorderly conduct and released with a court date to come back to New York. And, you know, if anyone has disorderly conduct, it’s the big bank CEOs who have been bailed out with our tax dollars and are walking around like free men and should be held accountable.

BOB BROADHURST: My name’s Bob Broadhurst. I’m with the International Brotherhood of Electrical Workers, Local 103, Boston. There is a class war against the unions. They’re the last stronghold between Wall Street, the Wall Street politicians we have, and the 99 percent. Right now, private-sector unions are about 5 percent of the population; public sector is about 7 percent. They’re dismantling our public sector. They are after them big time. Wisconsin, Obama never showed up there, never shows up in Chicago last week. There’s no difference, really, between these two parties. They’re under the influence of big money from Wall Street. I think Occupy Wall Street has gotten into the narrative the 99 percent.

We’re going right now to the streets of Lower Manhattan. Allison Kilkenny is there. She is with Citizen Radio and writes for The Nation magazine.

Allison, what do you see right now?

ALLISON KILKENNY: Hi, Amy. There are hundreds of people marching in the street. I witnessed two arrests myself. I’ve seen reports of around 10 more, including some arrests this morning. I just witnessed a photographer named Julia be arrested. The white-shirt supervising officers are acting very aggressively, shoving people out of the street. There are officers on mopeds accelerating very quickly, acting aggressively, telling people they’ll be arrested if they’re walking in the streets. But the protesters aren’t deterred yet. There are several factions walking all over Wall Street just trying to split up the police presence. I’m walking with one right now along South Street. There’s probably around 200 people.

AMY GOODMAN: For people watching this broadcast, we’re showing the live stream of what’s happening downtown Manhattan. Allison, what are people saying right now, and what is the state of Zuccotti Park itself?

ALLISON KILKENNY: I’ve seen reports that there are around 200 people at Zuccotti, as well. More arrests are happening in that area. I was marching with the protesters, and they were chanting, “Anti-capitalism,” “All day, all week, Occupy Wall Street,” their usual mantras. They seem really excited to be back in the street and to see each other again. This is the biggest reunion since the height of Occupy last year.

AMY GOODMAN: Allison Kilkenny, speaking to us from the streets of New York right near Wall Street. She is co-host of Citizen Radio and writes for The Nation. We’re going to break and come back and have a discussion about what happened a year ago and where the Occupy movement is today. Stay with us. 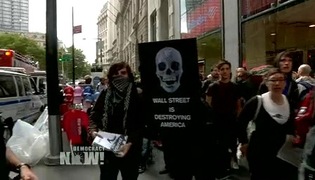