Glenn Greenwald, the journalist who first reported Edward Snowden’s leaks, is leaving The Guardian this week to join a new media venture funded by eBay founder and multi-billionaire Pierre Omidyar. “Usually [dissenting journalists] are on the outside of institutional power, and what this is really about is being able to create a very well-funded, powerful, well-fortified institution that’s designed not to just tolerate that kind of journalism, but to enable it and protect it, strengthen it and empower it,” Greenwald says. “The people who we’re going to select are all going to be people who take the same view of adversarial journalism, that it’s about holding the most powerful factions accountable, fearlessly, without regard to threats from the government or corporate factions. I think it’s going to be a very formidable force in shaping how journalism is understood and how it’s practiced.”

AMY GOODMAN: But we don’t have much time, and I want to turn, Glenn Greenwald, to your latest venture. You’re leaving The Guardian this week, the newspaper and the website where you have been a columnist and a blogger, and you are beginning to start a new venture with the eBay founder, Pierre Omidyar. Tell us what you’re doing.

GLENN GREENWALD: Yeah, I mean, the venture is still something that we’re shaping and figuring out how it’s going to work. But, obviously, the choice for him to work with us and for us to work with him—and by “us,” I mean Jeremy Scahill, who started with Democracy Now! and has been a longtime national security correspondent for The Nation, and Laura Poitras, the documentarian and great journalist in Berlin—I think gives people a strong sense of the kind of journalism that we intend to embolden and to strengthen. It’s very unusual, I think, for people who are dissenting political figures or journalists. Usually people like that have—are on the outside of institutional power. And what this is really about is being able to create a very well-funded, powerful, well-fortified institution that’s designed not to just tolerate that kind of journalism, but to enable it and protect it and strengthen it and empower it. And the people who we’re going to select are all going to be people who take the same view of adversarial journalism, that it’s about holding the most powerful factions accountable, fearlessly, and without regard to threats or repercussions from the government or corporate factions. And I think that it’s going to be a very formidable force in shaping how journalism is understood and how it’s practiced.

AMY GOODMAN: Pierre Omidyar, the founder of eBay, has said he’s going to put something like $250 million into your venture. He, at first, was possibly going to buy The Washington Post. Have you talked to Pierre Omidyar? Are you concerned about issues like—well, you know, he’s a founder of eBay. EBay cut off—eBay owns PayPal, which cut off support for WikiLeaks. What kind of discussions have you had around that, which certainly would be relevant to what you want to do and your deep concerns about control?

GLENN GREENWALD: Sure. In the very first conversation or second conversation I had with Pierre, I asked him about that exact issue. And what he told me was that, at the time—and this is absolutely true—he was not the CEO of eBay, he was not involved in its management or PayPal, and that he actually disagreed with that decision. And a newspaper that he owned in Honolulu, that he created and helped out and at which he was working, editorialized against the government’s attacks on WikiLeaks’s funding.

You know, I’ve moved several times now in my career, from being an independent blogger on my own to being at Salon and to go on to The Guardian and now to this. And each time I do it, I have people say, “Look, the institution that you’re going to go to, the people who are running it are going to force you into their [inaudible]. They’re going to restrict what it is that you can do.” And I always say the same thing, which is I would never go anywhere or stay anywhere that in any way tried to interfere with my editorial independence and freedom. And that’s absolutely true of this venture.

You know, if you look at Pierre’s record of advocacy over the last several years, and especially of the past five months, he’s been incredibly supportive of the NSA reporting we’ve been doing, of the notion of press freedom. He would not start a new business in order to make money. He would only start a new business for some goal, some civic-minded goal. And that goal, not to replicate what other journalistic outlets are doing or to restrict the independence of journalists, it’s to enable independent journalists to be even more independent, to be even more adversarial and aggressive in how they do their reporting. And I am completely convinced of the passion that he has behind that vision and his willingness to adhere to it. And at the end of the day, I think neither Jeremy nor myself would ever allow anybody to restrict what we do in any way, and that certainly includes him. But we have zero worries if that’s an intention; quite the opposite, we think he wants to enable us and others to do the kind of journalism that the United States people want more of.

AMY GOODMAN: I want to thank people for bearing with us; the audio is not so great today in this video stream. But lastly, you’ve engaged in this very interesting conversation with Bill Keller of The New York Times, this debate between the two of you, the former executive editor of the Times. Keller began the debate by writing, “We come at journalism from different traditions. I’ve spent a life working at newspapers that put a premium on aggressive but impartial reporting, that expect reporters and editors to keep their opinions to themselves unless they relocate (as I have done) to the pages clearly identified as the home of opinion.” He ended, saying, quote, “Embedded in The New York Times's institutional perspective and reporting methodologies are all sorts of quite debatable and subjective political and cultural assumptions about the world. And with some noble exceptions, The Times, by design or otherwise, has long served the interests of the same set of elite and powerful factions. Its reporting is no less ’activist,' subjective or opinion-driven than the new media voices it sometimes condescendingly scorns.” Can you comment on that and where you’re going with your new venture?

GLENN GREENWALD: Sure. And this came out of a New Yorker piece on the reporting that we did at The Guardian that quoted Bill Keller as saying he never would have allowed me, when he was the editor of The New York Times, to take the lead in reporting on these NSA stories, because I had expressed opinions about these topics previously. And so, he and I then had an email exchange about that, and he then offered, quite generously, to have a debate and publish it in his column. And I think it really reflects two very competing and different but strong frames in how journalism is understood: the kind of traditional New York Times model that I think has neutered and, in a lot of ways, helped to kill journalism as a potent force for checking power, and the kind of journalism that I think we intend to do, where it is much more passionate and [inaudible] and intended to be overtly adversarial to those in power. And I think you see the two competing visions in that exchange. And part of what I wanted to do was lay out for people why I think our vision produces better journalism, and to point to some of the really bad journalism that The New York Times has produced over the years—alongside some good stuff—which I think is a byproduct of this sort of obsolete way of thinking.

AMY GOODMAN: I want to thank you, Glenn, for being with us. Glenn Greewald, columnist on civil liberties and U.S. national security issues, is leaving The Guardian this week and is going to start his new venture with Pierre Omidyar, the founder of eBay, a new news organization, with Laura Poitras and Jeremy Scahill. This is Democracy Now! We’ll link to all your latest articles, Glenn, at democracynow.org. When we come back, the biggest deal, settlement, with the largest bank. Stay with us. 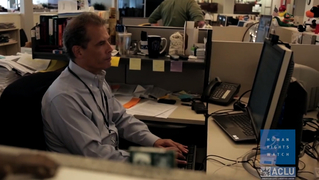