The partial shutdown of the federal government has entered its third day. More than 800,000 federal workers are furloughed, and numerous governmental programs have been forced to stop running. For example, the government shutdown has already caused as many as 19,000 children to lose access to Head Start. Many recipients of Special Supplemental Nutrition Program for Women, Infants and Children, more commonly known as WIC, will lose assistance. As negotiations remain stalled, Imara Jones of Colorlines.com looks at who is being hardest hit by the shutdown.

AMY GOODMAN: The partial shutdown of the federal government has entered its third day. More than 800,000 federal workers are furloughed, and numerous governmental programs have been forced to stop running. On Wednesday, President Obama met with Republican and Democratic leaders in Congress to try to end the deadlock, but there was no breakthrough.

Republicans, led by the tea party wing, have tried to tie continued government funding to measures that would undercut the Affordable Care Act. Senate Democratic Leader Harry Reid accused Republicans of trying to hold the president hostage over “Obamacare.”

SEN. HARRY REID: The president of the United States was very, very strong, strong, strong. This has never happened before. They can make all the historical analysis that they want. It just has never happened before, where a political party would be willing to take the country to the brink of financial disaster and say, “We’re not going to allow us to pay our bills.” The president said he will not stand for that, that—and we were—we said we will be happy to work—I said, “Happy to work with you, Mr. Speaker, on a way out of this, but we are where we are.” We’re not going to play—we’re through playing these little games on—it all is all focused on “Obamacare.” That’s all it’s about.

AMY GOODMAN: President Obama sat down Wednesday for an interview with CNBC.

PRESIDENT BARACK OBAMA: Until we make sure that Congress allows Treasury to pay for things that Congress itself already authorized, we are not going to engage in a series of negotiations. And the reason, John, is very—is very simple. If we get in the habit where a few folks, an extremist wing of one party, whether it’s Democrat or Republican, are allowed to extort concessions based on a threat of undermining the full faith and credit of the United States, then any president who comes after me—not just me—will find themselves unable to govern effectively. And that is not something that I’m going to allow to happen.

Meanwhile, The New York Times reports the new healthcare law will leave out two-thirds of the nation’s poor blacks and single mothers and more than half of the nation’s low-wage workers who don’t have insurance. That’s because they they live in states largely controlled by Republicans who have declined to participate in a vast expansion of Medicaid.

To talk more about the federal government shutdown and the launching of the healthcare exchanges, we’re joined by two guests. Imara Jones is the economic justice contributor for ColorLines.com, served in the Clinton White House, where he worked on international trade policy. And Trudy Lieberman is with us, contributing editor to Columbia Journalism Review, blogs on healthcare at cjr.org and has reported extensively on the Affordable Care Act.

Imara Jones, let’s begin with you. The disparate effect of this government crackdown—of the government shutdown?

IMARA JONES: It’s pretty far and wide. Whether we’re talking about education or nutrition programs or housing programs or the processing of immigration visas and citizenship, it’s a pretty wide shutdown. And one of the most interesting things is that the way that this is often covered is frustrating because it makes it appear as if it’s a Washington game, but for most Americans this is about as real as it gets. And the longer it goes on, it’s going to become even more so, and particularly as we begin to push up against the debt limit. And so, this is serious. It’s painful. It comes on top of the dramatic cuts of sequestration. And it’s going to be too much for many people to bear.

I just heard—spoke to someone last night who said that she personally knew, she works with, in the New York City public schools and works with poor children, and had heard yesterday of mothers with young children—excuse me—who had gone to WIC sites and WIC programs in New York that were out of food. And that’s on day two of sequestration. And, of course, on the first day, 19,000 kids were kicked out of Head Start. And so, this is dramatic. It’s painful. It’s real. It’s not a game.

AMY GOODMAN: So, talk more specifically about who this affects.

IMARA JONES: Mm-hmm. So, what’s interesting is that during the past 10 years—well, actually since the Clinton administration, the way that most government programs have been turned is to help and to encourage work amongst the working poor. And so, that’s why most people who are poor in this country work and have children, and many of the government programs that are discretionary, under discretionary spending, are designed to help that group. And so, that is the nutrition program of WIC that I spoke about. Head Start, which is what poor parents and working—specifically working poor parents use to help get their kids an equal footing with everyone else. That is on the back foot. In terms of housing, there are three million people in this country that get their housing through housing support, who work but don’t earn enough to live, who get housing support through discretionary programs. And Pell Grants, which help—which is a means-tested grant by the federal government that helps students from backgrounds that may not necessarily be wealthy have a chance to go to school. And on and on and on. Those are all—those are all of the types of things that are up and on the block right now, and it’s frightening. A lot of people are in a tough spot.

AMY GOODMAN: Furloughed federal workers handed out shutdown guides to tourists in Washington, D.C., on Wednesday. The guieds listed which monuments and museums are open and which are closed during the government shutdown. Seth Couslar, who has worked for the Federal Aviation Administration for the past 25 years, says the furlough will hurt his family.

SETH COUSLAR: I actually have two kids in college, out-of-state tuition. It’s going to be a significant financial hardship. I’m talking about possibly getting emergency loans from a credit union. I just finished paying this semester, but if this goes on two to three months longer, they won’t be able to attend next semester—may have to pull them back, exactly. And one is getting ready to graduate next year, so he’s really kind of—kind of calling me every day, asking me when—when are we—are we going back to work. So he’s close to graduating. So that would really be a crushing blow to my family and his future.

IMARA JONES: I mean, it’s just one story of millions. One of the other interesting parts of the story is that the federal government is the largest employer in the United States. And regardless of whether or not one is furloughed or at work, you’re not receiving a paycheck. That means that two million families are not receiving pay. Because of unionization and anti-discriminatory laws, people of color are overrepresented in government jobs. That’s true for the federal government. There are more people of color in the federal workforce as a whole than the broader workforce. And so, what this means is that the employment crisis in communities of color, the economic crisis in communities of color, is accentuated and exacerbated and extended by this shutdown. 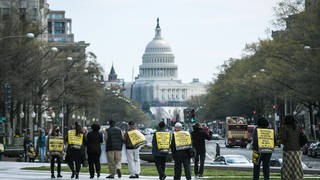