A video just posted online by Rolling Stone shows a hogtied prisoner being whipped by Afghan security forces, as what appears to be two unidentified American military officers look on. According to investigative reporter Matthieu Aikins, the Army’s Criminal Investigation Command confirmed an ongoing investigation into the incident. Aikins says the video fits with a general pattern of recurring abuse of detainees in U.S. and Afghan custody.

Web ExclusiveMar 26, 2015WATCH: Amy Goodman on Moving from Assessment to Accountability for “The Bush Doctrine” on Terrorism

AMY GOODMAN: Let’s go to another story from Afghanistan. Rolling Stone has just posted this video online, which shows a prisoner being whipped by Afghan security forces, as what appears to be two identified American military officers look on—unidentified American military officers look on. Let’s go to a clip. This is—video is extremely violent and disturbing.

AMY GOODMAN: For those who were just listening, we see what looks like Western soldiers at the back of this. Can you describe, Matt? This has just gone on Rolling Stone.

MATTHIEU AIKINS: This appears to be—now, I just want to say, we don’t know exactly who is in this video. It’s not related to the particular team that was in Wardak province. But it appears to be a group of translators, and possibly Afghan army soldiers, holding down a man and whipping him as they interrogate him. They ask him if he has any weapons, and he pleads with them, saying he’ll tell them anything, as two American soldiers look on. By their appearance and their facial hair, they appear to be probably U.S. Army Special Forces, Green Berets. So they could be military intelligence. They could be a few different things. The camouflage pattern on their pants didn’t really show up in Afghanistan until 2010, ’11, so the video is probably relatively recent.

AMY GOODMAN: So where does this all go right now? I mean, so you have the A-Team, and you think they are sort of quarantined at Fort Bragg. The U.S. military says they’re investigating this. The U.S. government says they’re pulling out of Afghanistan. It’s these Special Forces, at this point, that would stay, forces like this?

MATTHIEU AIKINS: Yeah, I think what really is worrying is that as the conventional American forces leave, this dirty war is just going to be handed off to Special Forces and the CIA, and they’re going to have carte blanche to, you know, stick around for scenes like that, to work with allies who are known abusers of human rights, to transfer detainees into prisons where we know people are being tortured, and just escape any form of oversight or congressional, you know, oversight, for example, because they fall under the rubric of covert or classified operations.

JUAN GONZÁLEZ: And this whole issue of the Status of Forces Agreement, clearly, this has been a sticking point not only in Iraq; in Korea, South Korea, this has been an issue for many years, negotiating a Status of Forces Agreement. I want to go to October, when Secretary of State John Kerry met with Afghan President Hamid Karzai to discuss an agreement necessary to keep a U.S. legal basis for forces in Afghanistan after 2014 and also to allow it to lease bases in the country. One of the sticking points is a U.S. demand that its troops be guaranteed immunity from prosecution under Afghan law. This is Secretary Kerry.

SECRETARY OF STATE JOHN KERRY: Now, we completely respect that the president should decide, appropriately, that this issue ought to be decided in his loya jirga. We absolutely—that’s the best of democracy. We embrace that. But there are realities, that if it isn’t resolved, we can’t send our forces in places, because we don’t subject United States citizens to that kind of uncertainty with respect to their rights and lives. It is no comment on any other country.

JUAN GONZÁLEZ: So this, again, he’s talking about the uncertainty that U.S. forces would face under potential Afghan justice.

MATTHIEU AIKINS: Yeah, I think there’s no question as to why the U.S. is reluctant to have a justice system that’s riddled with corruption and heavily politically influenced. They don’t want their soldiers to be subject to that. There’s no—there’s no doubt about that. The question is whether Afghans are willing to tolerate the presence of a military that commits these kind of acts, you know, that has such weak oversight and accountability that these acts are just a repeating pattern over 10 years.

AMY GOODMAN: We want to thank you very much, Matthieu Aikins, for joining us. Matthieu Aikins is an award-winning investigative journalist based in Kabul, Afghanistan. His piece, “The A-Team Killings,” has just been published by Rolling Stone magazine. We will link to it at our website, democracynow.org.

When we come back, a new report called “Ethics Abandoned” about U.S. psychologists, psychiatrists, military medical personnel involved with torture at places like Guantánamo. Stay with us. 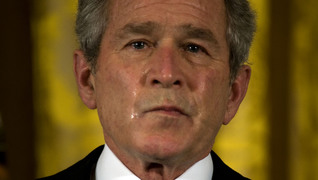 WATCH: Amy Goodman on Moving from Assessment to Accountability for “The Bush Doctrine” on Terrorism