Former South African president and anti-apartheid leader Nelson Mandela has died at the age of 95. South African President Jacob Zuma announced Mandela’s death Thursday saying, “Our nation has lost its greatest son. Our people have lost their father.” Mandela was held as a political prisoner for 27 years from 1962 to 1990. In 1994, four years after his release from prison, Mandela became South Africa’s first black president. We air highlights of Mandela in his own words over the years, including a rare TV interview from the early 1960s.

Click here to watch our special coverage of the life and legacy of Nelson Mandela.

JUAN GONZÁLEZ: Today we will spend the hour remembering the life of Nelson Mandela. South African President Jacob Zuma announced the news of his death on Thursday.

PRESIDENT JACOB ZUMA: Fellow South Africans, our beloved Nelson Rolihlahla Mandela, the founding president of our democratic nation, has departed. He passed on peacefully in the company of his family around 20:50 on the 5th of December, 2013. He is now resting. He is now at peace. Our nation has lost its greatest son. Our people have lost a father.

JUAN GONZÁLEZ: South Africa’s first black and first democratically elected leader, Nelson Mandela, has died at the age of 95. Mandela was imprisoned for 27 years from 1962 to 1990. In 1994, four years after his release from prison, he became South Africa’s first black president. This marked the end of apartheid, an official policy of racial segregation and white supremacy enforced by the South African government beginning in 1948. Mandela’s anti-apartheid and anti-colonial activities dated back to the 1940s.

AMY GOODMAN: Trained as a lawyer, he became a founding member of the African National Congress Youth League along with Walter Sisulu and Oliver Tambo. During the 1950s and early ’60s, Mandela was repeatedly arrested and went through several major trials, the first in 1956 when he was charged with high treason, but the charges were dropped after a four-year trial. In this rare televised interview, a young Mandela, who was in hiding at the time, talked about the role of nonviolence in the anti-apartheid struggle.

NELSON MANDELA: We have made it very clear in our policy that South Africa is a country of many races. There is room for all the various races in this country. There are many people who feel that it is useless and futile for us to continue talking peace and nonviolence against a government whose reply is only savage attacks on an unarmed and defenseless people.

JUAN GONZÁLEZ: On March 21st, 1960, South African police opened fire on a group of black protesters, killing 69 people in what became known as the Sharpeville massacre. Ten days later, the government banned the African National Congress. Mandela, by then the ANC’s national vice president, soon went underground, and the ANC launched a campaign of economic sabotage and took up arms against the South African government. In 1962, Mandela was arrested and charged with sabotage and attempting to violently overthrow the government.

AMY GOODMAN: The CIA reportedly played a role in his capture. In 1990, The New York Times quoted an unidentified retired official who said a senior CIA officer told him shortly after his arrest, quote, “We have turned Mandela over to the South African security branch. We gave them every detail, what he would be wearing, the time of day, just where he would be.” This is Nelson Mandela speaking before the court.

NELSON MANDELA: The ANC has spent half a century fighting against racism. When it triumphs, as it certainly must, it will not change that policy. This then is what the ANC is fighting. I have fought against white domination, and I have fought against black domination. I have cherished the idea of a democratic and free society, in which all persons will live together in harmony and with equal opportunities. It is an idea for which I hope to live for and to see realized. But, my Lord, if it needs be, it is an idea for which I am prepared to die.

JUAN GONZÁLEZ: In 1964, Nelson Mandela was sentenced to life in prison on Robben Island. He would become the most famous political prisoner in the world, and his freedom became a central demand of the international anti-apartheid movement. Despite growing international pressure in the 1980s, the apartheid government received strong backing from the Reagan administration and Margaret Thatcher in Britain. The ANC was considered a terrorist organization by both nations. Mandela was listed on the U.S. terrorist watch list until 2008.

AMY GOODMAN: In Washington, 180 House members voted against a nonbinding resolution in 1986 calling for Mandela’s release from prison and for recognition of the ANC. Future Vice President Dick Cheney, then a congressman, voted against the resolution. In 2000, Cheney defended his vote, saying the ANC, quote, “at the time was viewed as a terrorist organization and had a number of interests that were fundamentally inimical to the U.S.” Well, in February 1990, Nelson Mandela was released from prison. The president of South Africa at the time was F.W. de Klerk.

NELSON MANDELA: I stand here before you, not as a prophet, but as a humble servant of you, the people. I place the remaining years of my life in your hands.

AMY GOODMAN: Four months later, Nelson Mandela traveled to the United States. He spoke at Yankee Stadium, where he was introduced by Harry Belafonte.

HARRY BELAFONTE: Never in the history of humankind has there ever been a voice that has more clearly caught the imagination and the spirit and fired the hope for freedom than the voice of the deputy president of South Africa, Nelson Mandela.

JUAN GONZÁLEZ: That was Nelson Mandela speaking at Yankee Stadium in 1990, an excerpt from Danny Schechter’s film, Mandela in America. Three years later, he was awarded the Nobel Peace Prize. In 1994, the people of South Africa elected him president in the country’s first multiracial election. His inauguration took place in Pretoria on May 10th, 1994, televised to a billion viewers globally. Mandela was introduced by South African poet Mzwakhe Mbuli, known as “The People’s Poet,” before he formally took the oath of the presidency.

MZWAKHE MBULI: Ladies and gentlemen, I want to take this historic honor and introduce to you the new South African president of the Republic of South Africa, Nelson Rolihlahla Mandela. I talk of Madiba. Like gold and diamond, like diamond and gold, you have gone through the fires of time in order to be refined. You have gone through all forms of life. I talk of Nelson Rolihlahla Mandela. Like an oak tree, you have survived all kinds of weather. Comrade Mandela, you are a hero. You are a veteran. You are a stalwart. You are a catalyst to unite. You are the father of the new nation.

PRESIDENT NELSON MANDELA: I, Nelson Rolihlahla Mandela, do hereby swear to be faithful to the Republic of South Africa, so help me God.

AMY GOODMAN: An excerpt from the film Countdown to Freedom. As President Nelson Mandela helped establish a new constitution and initiated the Truth and Reconciliation Commission, which investigated apartheid crimes on both sides and tried to heal the wounds, he served as president until 1999. Later that year, he set up the Nelson Mandela Foundation. He was widely viewed as a global icon, but he did not shy away from criticizing the United States’ invasion of Iraq. In 2003, Mandela said, quote, “If there is a country that has committed unspeakable atrocities in the world, it is the United States of America. They don’t care,” he said. Earlier today, South African Archbishop Desmond Tutu paid tribute to his friend and fellow Nobel Peace laureate, Nelson Mandela.

ARCHBISHOP DESMOND TUTU: And so, we have lost our father. So many, many of us addressed him as Dada, an affectionate term for father. But of course we don’t want to linger and wallow in our abundant tears, for we, yes, wonderfully are able to give great thanks to God for this one who was denigrated for so long, this “terrorist.”

AMY GOODMAN: Archbishop Desmond Tutu speaking earlier today at mass at St. George’s Cathedral in Cape Town, South Africa. Yes, President Nelson Mandela has died at the age of 95. And we’ll spend the rest of the hour on his life and legacy. This is Democracy Now! Back in a minute. 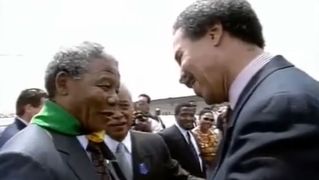