A lawsuit challenging a law that gives the government the power to indefinitely detain U.S. citizens is back in federal court this week. On Wednesday, a group of academics, journalists and activists will present oral arguments in court against a provision in the National Defense Authorization Act, or NDAA, authorizing the military to jail anyone it considers a terrorism suspect anywhere in the world without charge or trial. In a landmark ruling last September, Judge Katherine Forrest of the Southern District of New York struck down the indefinite detention provision, saying it likely violates the First and Fifth Amendments of U.S. citizens. We’re joined by Daniel Ellsberg, a plaintiff in the case and perhaps the country’s most famous whistleblower. Ellsberg leaked the Pentagon Papers in 1971, exposing the secret history of the U.S. involvement in Vietnam. [includes rush transcript]

AMY GOODMAN: A lawsuit challenging a controversial statute that gives the government the power to indefinitely detain U.S. citizens is back in federal court this week. On Wednesday, a group of academics, journalists, and activists will present oral arguments in court against a provision in the National Defense Authorization Act, or NDAA, authorizing the military to jail anyone it considers a terrorism suspect anywhere in the world without charge or trial.

NERMEEN SHAIKH: In a landmark ruling last September, Judge Katherine Forrest of the Southern District of New York struck down the indefinite detention provision, saying it likely violates the First and Fifth Amendments of U.S. citizens. The judge rejected the Obama administration’s argument that the NDAA merely reaffirmed an existing law recognizing the military’s right to perform certain routine duties. However, President Obama quickly appealed Judge Forrest’s ruling and sought an emergency stay on the injunction.

Well, for more, we’re joined now by Daniel Ellsberg, one of the plantiffs in the NDAA lawsuit who will be attending Wednesday’s hearings. He’s perhaps the country’s most famous whistleblower, who leaked the Pentagon Papers in 1971, the secret history of the U.S. involvement in Vietnam.

NERMEEN SHAIKH: So, can you talk about this case?

DANIEL ELLSBERG: Yes. Well, as an American citizen, I’m really almost whipsawed by emotions this morning. On the one hand, I’m here to attend the court hearing at the circuit court on Wednesday at the Federal Court Building, where I expect to see the Obama administration color itself with shame in arguing that an American citizen can be detained indefinitely in military custody without charges, indefinitely, violating really the core principles of law that go back to the Magna Carta. On the other hand, I was up late last night reading the 112-page document of Katherine B. Forrest, and I have to say, at the end of that—

DANIEL ELLSBERG: The judgment, again, granting an injunction, saying that these provisions of the law that will be argued and defended by—shamefully, by the Obama administration and by three U.S. senators, who will be claiming that the detention is constitutional and legal—her argument was that it was facially unconstitutional. And when I read her detailed argument, 112, taking each point of the prosecution over a period now of nearly a year—their evidence, their lack of evidence, their argument—taking each argument that this was constitutional and smashing it on this, I felt pride as an American. I thought, this is the American citizen that I fought for as a marine. This is a constitutional order, a rule of law, a judge, appointed by Obama, who’s willing to say that her boss was mistaken in claiming that this rule is compatible with our rule of law.

It really says to me, at last, I think, that President Obama, who was a constitutional teacher, like Professor John Yoo, Y-O-O, of Berkeley, who authored most of these torture memos in the first place—I think that, like Yoo, Obama has to be seen as either a rotten constitutional lawyer or a man who, like Yoo, believes that the Constitution simply does not bound an American prisoner in any way in an indefinite law of torture. And either way, I believe we have here impeachable offenses by all of the people arguing this case, including the three senators—McCain, others—who will be arguing today on this. We should be looking at Brennan and the other people connected with the torture program not in terms of confirmation hearings, but in terms of impeachment hearings and convictions.

AMY GOODMAN: The case is called Hedges v. Obama. A number of people are involved—Chris Hedges, the writer, who says if—you know, he’s one of the—part of a team at The New York Times who won a Pulitzer Prize—

DANIEL ELLSBERG: He’s pressed this case, to his great credit. I have great admiration for Hedges.

AMY GOODMAN: —says that if he is talking to someone who the United States deems terrorist, he could end up in jail himself, as a journalist. Noam Chomsky, Cornel West, you yourself, Dan Ellsberg, the premier whistleblower of this country.

DANIEL ELLSBERG: For talking to Jake Appelbaum, right here, who has been identified at one point, an earlier point, as a spokesperson from WikiLeaks. Bradley Manning right now is on trial in military court with the absurd and unconstitutional charge of aiding the enemy without any element of intent, merely that his information would get to Obama—I’m sorry, to Osama bin Laden or to al-Qaeda eventually, thus making it, in effect, a terrorist organization. But giving it to WikiLeaks is very like saying that WikiLeaks is the enemy he’s aiding and affecting.

Now, simply by associating with Jake, whom I’m proud to do and I’m learning from, or supporting WikiLeaks or Manning as I do, it’s very clear that my speech, my First Amendment activities in support of their activities, can be interpreted by the vague, broad terms of this unconstitutional 1021(b)(2) section of the National Defense Authorization Act as, quote, “substantial support to an organization associated with terrorism.” These vague terms make it possible—really there’s no one at this table who could be exempt from some informed official, who we’ve now learned has the power to defend—to condemn us to death. And, of course, if you can do that, I’m sure they can feel quite easy about simply putting us in military custody like Bradley Manning, even though we’re not in the military.

NERMEEN SHAIKH: Well, this law is unprecedented in U.S. history. Can you talk about what—

DANIEL ELLSBERG: Well, as a law, it’s unprecedented, but as a practice—what we’ve seen for the last 10 years is a systematic assault on the Constitution of the United States in every aspect—in the aspects of the illegal surveillance, the warrantless surveillance, which was conducted against me 40 years ago by President Nixon and then led to his impeachment proceedings, but is now regarded as legal. That’s the way the law has changed. Efforts to assault me or kill me on the steps of the Capitol on May 3rd, 1972, a presidential hit squad of the kind that the president now takes pride in proclaiming that he runs all over the world.

AMY GOODMAN: But explain, for people who don’t know your story, how was it 40 years ago that you’re saying you could have been—

DANIEL ELLSBERG: Well, 40 years ago, I was on trial for the same offense, essentially, as Bradley Manning, though he was in the military. As a former civilian official, I released 7,000 pages of top-secret documents demonstrating lies, crimes, treaty violations by the American government that had lied us into a wrongful and hopeless war and were killing Americans and others at a great rate as it went on. For that, I was facing 115 years in prison, just as Bradley Manning is now facing life charges, essentially the same. In my case, the crime—the then-crimes against me of illegal surveillance, warrantless surveillance, the use of the CIA against me, now legal under the PATRIOT Act, and a hit squad against me, now allegedly legal by the president, all those things figured in impeachment proceedings against President Nixon.

DANIEL ELLSBERG: And it led to his resignation. They should lead, right now—we’ve seen this assault. The time has come—and Katherine Forrest has shown the way, I think—to defend the Constitution and try to restore it to the rights of Americans.

Part 2: Daniel Ellsberg and Jacob Appelbaum on the NDAA, WikiLeaks and Unconstitutional Surveillance 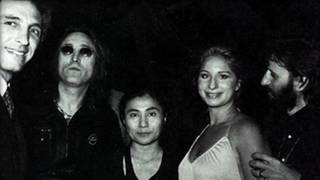 Part 2: Daniel Ellsberg and Jacob Appelbaum on the NDAA, WikiLeaks and Unconstitutional Surveillance