As the twin bombings hit the Boston Marathon, deadlier blasts also ripped through the densely populated Somali capital of Mogadishu. Hours after car bombs and suicide bombers killed at least 16 people outside a court complex on Sunday, another car bomb detonated and killed Turkish nationals. In Somalia, unlike Boston, there were no highly trained emergency personnel on the scene or top-notch hospitals to treat victims. Since 1991, when the Somali government collapsed, aid groups fled the country, and violence routinely interrupts everyday life. However, one Somali physician has made it her life mission to care for those worst hit by violence, poverty and sickness. Dr. Hawa Abdi is known as “the Mother Teresa of Somalia.” In her new memoir, “Keeping Hope Alive: One Woman—90,000 Lives Changed,” Dr. Abdi explains why she established a hospital, school and shelter for internally displaced people just outside the war-torn capital of Mogadishu. Tens of thousands of displaced Somalis still live there today. She also recounts the difficulties she has encountered as one of the few female physicians in Somalia and her harrowing experience of being kidnapped by militants. Dr. Abdi joins us along with her daughter, Dr. Deqo Mohamed. [includes rush transcript]

AMY GOODMAN: Ah, the great K’naan. You can go to our website and see K’naan performing in our studios, as well, the great musician, a Somali-Canadian musician. I’m Amy Goodman, with Aaron Maté. This is Democracy Now! Aaron?

AARON MATÉ: Well, we end today’s show over 7,000 miles from Boston in the African nation of Somalia. A militant group is threatening to carry out more attacks after at least 30 people were killed in coordinated bombings and shootings in the capital Mogadishu on Sunday. The militant group al-Shabab claimed responsibility for the attacks, which included a series of explosions and an assault by gunmen on the Supreme Court complex and another car bomb near the airport.

AMY GOODMAN: In Somalia, unlike Boston, there were no highly trained emergency personnel on the scene or top-notch hospitals to treat victims. Since 1991, when the Somali government collapsed, aid groups fled the country, and violence routinely interrupts everyday life. However, one Somali physician has made it her life mission to care for those worst hit by violence, poverty and sickness: Dr. Hawa Abdi. She’s known as “the Mother Teresa of Somalia.” She has just written a memoir called Keeping Hope Alive: One Woman—90,000 Lives Changed. In it, she explains why she established a hospital, school and shelter for internally displaced people just outside the war-torn capital of Mogadishu. Today, tens of thousands of Somalis live on her compound. Hundreds attend school. Two wells provide fresh water. Families are growing food on nearby land.

In her memoir, she also recounts the difficulties she’s encountered as one of the few female physicians in Somalia and her harrowing experience of being kidnapped by insurgents. Dr. Abdi, along with media pressure, eventually convinced the rebels not only to free her but also issue a written apology. In 2012, she was nominated for a Nobel Peace Prize.

For more, we’re going to Fort Worth, Texas, where we’re joined by Dr. Hawa Abdi as well as her daughter, also a doctor, Deqo Mohamed. They are Somalian human rights activists and physicians who run the Dr. Hawa Abdi Foundation, a nonprofit group. And soon they head back to Somalia.

We welcome you both to Democracy Now! I know that you’re watching the news, as well, the horror of what happened at the Boston Marathon with the double explosion, bomb explosion, that has killed three and injured well over a hundred. Dr. Hawa Abdi, you, yourself, in Somalia experience this kind of violence on a regular basis. The worst violence in two years happened on Sunday in Mogadishu with this coordinated bombings. Your thoughts today?

DR. DEQO MOHAMED: I think our thoughts are with the families who lost their children and loved ones in here, in Boston and also in Somalia. In Somalia, we have blasts every other day, there’s a bombing happening. Every other day we’re losing the lives. And it’s devastating to say it’s a part of life, and it’s unacceptable, this, to be a part of life. I think we’re praying, me and my mother and all our team, for the families who lost their loved ones.

AMY GOODMAN: That’s Dr. Deqo Mohamed, Dr. Hawa Abdi’s daughter. They work together on their project to save people in Somalia by health and poverty—fighting poverty. Could you ask your mother, Dr. Mohamed—could you ask Dr. Abdi about how she deals with the violence, how she fights the violence and tries to build a different Somalia today?

DR. HAWA ABDI: We have suffered for 22 years, losing thousands’ life and witnessing some of the worst things that to human beings could happen. Last Sunday, our courts were attacked by few desperate terrorists, and they killed 20 people, innocent people. We are sorry those killing, and we are sorry also what has happened yesterday in Boston.

AMY GOODMAN: How did you convince the Shabab, the young men who kidnapped you, Dr. Abdi, to not only release you—it also was an international effort—but to issue an apology for kidnapping you?

DR. HAWA ABDI: I think they are in safe hand. They are living peaceful place. Their children were coming to educate the children. But inside Somalia, there is no security, not enough education, not enough food. Every year drought. We are losing thousands of life, especially children and elderly people. Our children is dying from malnutrition.

DR. DEQO MOHAMED: I think now U.S. government and the policy toward U.S. government to Somalia is changing. For the last 20 years, we were in a silence. They haven’t—they didn’t want to intervene after what happened in Black Hawk Down in 1993. U.S. just stayed away from all the issues in Somalia. Now they are intervening in a good—I think, in a positive way, because they’re supporting the government. They’re trying to put the peace in place.

AMY GOODMAN: Dr. Hawa Abdi and Dr. Deqo Mohamed, we have to wrap, but we’re going to continue the conversation, and we’ll [post it online at democracynow.org]. 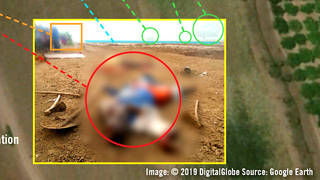