According to a recent study, the shooting death of Trayvon Martin and the acquittal of his killer is not unique. In “Operation Ghetto Storm,” the Malcolm X Grassroots Movement (MXGM) found at least 136 unarmed African Americans were killed by police, security guards and self-appointed vigilantes in 2012. Overall, one black person was killed in an extrajudicial shooting every 28 hours. We speak with Kali Akuno, a longtime MXGM organizer and author of “Let Your Motto Be Resistance: A Handbook on Organizing New Afrikan and Oppressed Communities.” “This speaks to the mindset of criminalizing blackness,” Akuno says. “We see it systematically throughout this country and really we have to get at the heart of it and have a much deeper conversation. I think the mass movement which is taking place in response [to the Trayvon Martin case] is an opening shot to have that conversation.”

NERMEEN SHAIKH: We turn now to a report that examines how what happened to Trayvon Martin, and the lack of punishment faced by his killer, is not unique. In a survey conducted in 2012, the Malcolm X Grassroots Movement found at least 136 unarmed African Americans were killed by police, security guards and self-appointed vigilantes over the course of a single year. When African Americans who were armed are included in the survey, the overall number killed in extrajudicial shootings was 313—one black person killed every 28 hours.

AMY GOODMAN: For more, we’re joined by Kali Akuno, a longtime organizer with the Malcolm X Grassroots Movement, author of Let Your Motto Be Resistance: A Handbook on Organizing New Afrikan and Oppressed Communities. His organization’s report is called “Operation Ghetto Storm,” documenting the extrajudicial killing of 313 black people in 2012. Michelle Alexander is still with us, author of The New Jim Crow.

It’s great to have you both with us. Kali Akuno, very quickly, just go through what you found.

KALI AKUNO: What we found is that this practice of extrajudicial killings is very systematic throughout the country. We found that police officers rarely—or the security guards or those who are deputized, such as George Zimmerman—are rarely, if ever, persecuted for the crimes that they commit, for the killings that they commit. And we found that overwhelmingly—as you mentioned some of the figures, overwhelmingly, most of the folks who were killed do not have any weapons. And the main reason—even 47 percent of those who were killed, the reasoning that was offered by the police is that they felt threatened—and so, a very similar argument that you hear in the Zimmerman case. And this was very systematic.

And we also found that—313 is what we could definitely verify, but we believe that this is an undercount. And this is primarily because the police, how they document these killings, oftentimes in many states there is no race designated. But what you can do is look at the geographic area and kind of make some summaries. But the federal government really is not compiling this information, and not many people are trying to compile this information, so there is a pretty significant gap in terms of, you know, the cold reality, if we want to look at and desegregate it by race, of what’s actually taking place in our communities.

AMY GOODMAN: Kali, I want to ask you about a particular case. A trial began this week in Milwaukee, Wisconsin, for a case that’s been compared to the Trayvon Martin shooting. An elderly white man, John Henry Spooner, is facing first-degree intentional murder charges for the fatal shooting of his unarmed [neighbor], a 13-year-old African-American boy named Darius Simmons, in May 2012. According to the criminal complaint, Spooner confronted Darius Simmons of stealing from his home. When Simmons denied it, Spooner shot him. The boy’s mother witnessed her son’s murder. Darius Simmons’ aunt, Betty McCuiston, spoke at the vigil after the shooting.

BETTY McCUISTON: And his mom want everyone to know that he had his hands up, standing in front of him, when he shot him. And then he turned to run, and he shot him again in his back.

AMY GOODMAN: After witnessing her son’s murder, Darius Simmons’ mother, Patricia Larry, was reportedly forced to remain in a police car for more than an hour instead of being allowed to be with her son’s body. Police searched her home for the firearms Spooner had accused the boy of stealing but found nothing. He was her—his neighbor. They also arrested another of her sons on a year-old truancy violation. On Monday, at least one potential juror for the Spooner case was not chosen after he expressed anger over the Zimmerman verdict. Of the 14 jurors selected Monday, only one is African American. If you could tell us more about this, Kali Akuno?

KALI AKUNO: Well, I mean, just briefly, we see, again, the same pattern, particularly in the jury selection. We see the same pattern of how the police were derelict in their duties to gather the information, how they treated the mother and the rest of her family as if they were guilty. We see the same kind of pattern. It speaks to the mindset of criminalizing blackness, of criminalizing black people, that Michelle Alexander was breaking down to you, that we see as systematic throughout the country and that really we have to get at the heart of and have a much deeper conversation. And I think the mass movement which is taking place in response is an opening shot to have that conversation, to really talk about race in a more substantive way and to basically, I think, deal with the policies that we need to transform, you know, the stop and frisk, the war on drugs, because that’s ultimately what we’re talking about and what has to take place in this country, and to change this narrative.

MICHELLE ALEXANDER: Well, just that I think it’s critically important that we think beyond traditional forms of politics. If we are serious about building a movement that will end the Zimmerman mindset, that will end mass incarceration and break our nation’s habit of treating black and brown men as disposable, it is going to take organizing, it’s going to take civil disobedience, it’s going to take a commitment to movement building far beyond the forms of traditional advocacy that have been so prevalent in recent decades.

AMY GOODMAN: Michelle Alexander and Kali Akuno, we want to thank you so much for being with us. 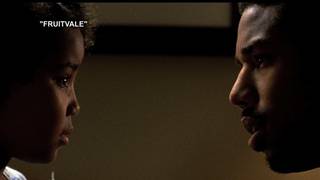