Questlove of The Roots on His Musical Memoir, “Mo’ Meta Blues: The World According to Questlove”

In this Democracy Now! web exclusive, Ahmir “Questlove” Thompson, the drummer for the legendary hip-hop group The Roots, discusses the writing of his new memoir, Mo’ Meta Blues: The World According to Questlove. The book’s title is a riff on the 1990 Spike Lee film about jazz musicians, Mo’ Better Blues. See all of our extended interview with Questlove.

AHMIR ”QUESTLOVE” THOMPSON: So, Mo’ Meta Blues is probably best described as—it’s probably a memoir about a memoir about a memoir, because of the odd format of the book. Like, I didn’t want to write an autobiography, because, first of all, like, who has lived a life at the age of 40? And I know that with most people involved in the hip-hop world, like, life sort of starts at 18 and, unfortunately, sometimes ends before you turn 30. But, you know, it’s more or less a punch-drunk memoir, and it’s part commentary and part—it’s the story of, I guess, the tortoise and the hare, of which somehow The Roots have miraculously survived a few nuclear wars—known as the music industry—to somehow come out unscathed, if you will.

Initially, I was skeptical to write a book in this nature, because, as a person that’s read a lot of music biography stories, you know, I feared that I had no great, salacious Led Zeppelin shark stories to tell or tales of The Who, you know, crashing a car into a Holiday Inn pool, or anything that salacious, like the Mötley Crüe book. But my manager and my publisher convinced me, like, “You know, you’re one of the few hip-hop figures not mired in criminality, and you don’t have that rags-to-riches story. Like, you started off middle-class, and your journey is more about you being a musician and a craftsman, not just a personality.” And so, I was slow to do it, but, you know, as I started documenting it, I felt it was necessary. So, I’m actually very happy with the response that it’s gotten. I was shocked that people—that it hit a note with people.

BLEEK GILLIAM: [played by Denzel Washington] So, here we are. This is our music, right? Jazz is our music, black music. Now, here’s people—we will go and watch some crossover—

BLEEK GILLIAM: —stuff that’s created by other people, but we won’t even come to see our own, man.

SHADOW HENDERSON: [played by Wesley Snipes] Taken from us violently.

BLEEK GILLIAM: Listen—right. Listen, listen. But the jazz—you know, if we had to depend upon black people to eat, we would starve to death. I mean, you’ve been out there. You’re on the bandstand. You look out into the audience: What do you see? You see Japanese. You see—you see West German. You see, you know, Slabovic, anything, but—except our people, man. It makes no sense. It incenses me that our own people don’t realize our own heritage, our own culture. This is our music.

SHADOW HENDERSON: Yo, Bleek, out of all the people in the world, you never gave anybody else—and, look, and I love you like a step-brother, but you never gave nobody else a chance to play their own music.

BLEEK GILLIAM: What are you talking about?

BLEEK GILLIAM: I’m talking about the audience. What are you—

SHADOW HENDERSON: Like me, that’s what I’m going to do.

SHADOW HENDERSON: I don’t know about you, but that’s what I’m going to do.

BLEEK GILLIAM: I see. So—

SHADOW HENDERSON: I’m going to play the [bleep] that everybody like.

BLEEK GILLIAM: That’s my voice, man. I have my own voice, right?

BLEEK GILLIAM: All I’m saying is, people are listening—

SHADOW HENDERSON: You got a voice.

BLEEK GILLIAM: —to my voice.

BLEEK GILLIAM: I said our people aren’t coming. That’s what I’m talking about. 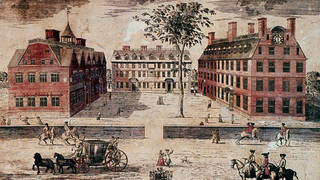