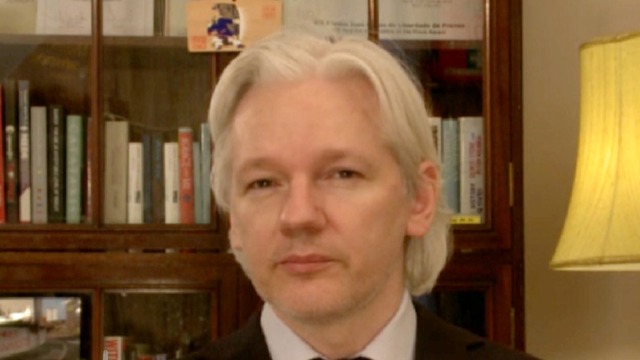 Julian Assange of WikiLeaks responds to the sentencing of Bradley Manning to 35 years in prison for turning over more than 700,000 classified files to WikiLeaks. Manning could be eligible for parole in about a decade, after serving one-third of his prison term.

In a statement Assange said:

Today the well-known whistleblower Bradley Manning has been ordered by a military court in Maryland to spend a minimum of 5.2 years in prison with a 32 year maximum (including time already spent in detention), for revealing information about US government behaviour to the public.

This hard-won minimum term represents a significant tactical victory for Bradley Manning’s defense, campaign team and supporters. At the start of these proceedings, the United States government had charged Bradley Manning with a capital offence and other charges carrying over 135 years of incarceration. His defense team is now appealing to the US Army Court of Criminal Appeals in relation to this sentence and also for due process violations during the trial.

While the defense should be proud of their tactical victory, it should be remembered that Mr Manning’s trial and conviction is an affront to basic concepts of Western justice. On Mr Manning’s arrest in May 2010, he was immediately subjected to punitive incarceration by the US government, which was found to be “cruel, inhumane and degrading” by the UN Special Rapporteur on Torture, Juan Mendez, and even found to be unlawful by US military courts.

The period Mr Manning has already spent in prison will be subtracted from the sentence, and dispensations for good behaviour, parole and other factors mean that it is likely he will now spend less than ten years in confinement. Mr Manning’s defense team are now seeking to reduce this sentence further on appeal. US military law stipulates that the sentence can only be reduced. It is important that support for Bradley Manning continues during this time.

The only just outcome in Mr Manning’s case is his unconditional release, compensation for the unlawful treatment he has undergone, and a serious commitment to investigating the wrongdoing his alleged disclosures have brought to light.

Mr Manning’s treatment has been intended to send a signal to people of conscience in the US government who might seek to bring wrongdoing to light. This strategy has spectacularly backfired, as recent months have proven. Instead, the Obama administration is demonstrating that there is no place in its system for people of conscience and principle. As a result, there will be a thousand more Bradley Mannings.