The film, “Dirty Wars: The World Is A Battlefield,” has received an official nomination for 2014 best documentary by the Academy of Motion Picture Arts and Sciences. The film follows longtime Democracy Now! correspondent and investigative reporter Jeremy Scahill to Afghanistan, Somalia and Yemen as he chases down the hidden truths behind America’s expanding covert wars. It is directed by Richard Rowley.

See our in-depth page to see Scahill’s interviews on topics explored in “Dirty Wars,” such as drones, Yemen, Somalia, Anwar al-Awlaki, and our related coverage. Scahill is also author author of the best-selling book, “Blackwater: The Rise of the World’s Most Powerful Mercenary Army.” He started as a producer with Democracy Now! in 1998, and is now a correspondent for the show. 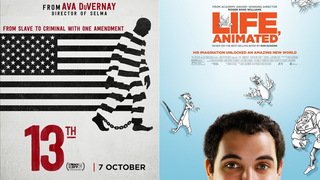 “13th” & “Life, Animated”: Meet the Filmmakers Behind the Oscar-Nominated Documentaries