Israel continues to bombard the Gaza Strip amidst talks over a ceasefire. Israeli military attacks today include the bombing of Gaza’s sole power plant and the heavy shelling of Khan Younis, killing six people and leaving at least 20 wounded. The Palestinian death toll is near 650, including more than 160 children. Some 4,000 have been wounded. According to Gaza officials, 475 houses have been totally destroyed, and more than 2,600 homes have been partially damaged. Israel has also struck 46 schools, 56 mosques and seven hospitals. Two more Israeli soldiers have been killed, bringing the Israeli military death toll inside Gaza to 29. A farm worker from Thailand also died inside Israel after being hit by rocket fire from Gaza. On the diplomatic front, Secretary of State John Kerry is in Israel today for talks with Israel and then the Palestinian Authority. Palestinian President Mahmoud Abbas has endorsed a Hamas call to condition a ceasefire on ending the seven-year blockade of the Gaza Strip. Speaking today at the U.N. Human Rights Council, Navi Pillay, the U.N. high commissioner for human rights, said there is a “strong possibility” Israel has committed war crimes in Gaza. Pillay cited Israel’s deadly attack on residential homes in the Shejaiya neighborhood and the shelling of the al-Aqsa Hospital. On Tuesday, U.S. and European airlines halted flights to Tel Aviv after a rocket strike landed about a mile from the airport. We go to Gaza City to speak with Democracy Now! correspondent Sharif Abdel Kouddous.

NERMEEN SHAIKH: Secretary of State John Kerry has arrived in Tel Aviv for talks with Israeli and Palestinian Authority leaders over a possible ceasefire as the death toll continues to rise in Gaza. About 650 Palestinians have now died in the 16-day Israeli offensive. The death toll includes over 160 children. A seven-year-old died this morning when an Israeli shell hit a cart pulled by a donkey. According to Gaza officials, 475 houses have been totally destroyed, and over 2,600 homes have been partially damaged. Israel has also struck 46 schools, 56 mosques and seven hospitals.

AMY GOODMAN: Meanwhile, two more Israeli soldiers have been killed, bringing the Israeli death toll inside Gaza to 29. A farm worker from Thailand also died inside Israel after being hit by rocket fire from Gaza. On Tuesday, U.S. and European airlines halted flights to Tel Aviv after a rocket strike landed about a mile from the airport.

On the diplomatic front, Palestinian President Mahmoud Abbas has backed calls by Hamas for an end to the economic blockade of the Gaza Strip as a condition for a ceasefire.

Sharif, tell us where you have just come from.

SHARIF ABDEL KOUDDOUS: Amy, I was just at the Gaza power plant, which was hit last night by the Israeli military at least three times with artillery shells. This is Gaza’s only power plant. It provides about 30 percent of the electricity to the Gaza Strip. And it was severely damaged last night, and it’s not working right now, and they’re looking to repair it. This comes as already Gaza is suffering a very severe electricity problem with the vast majority of Gaza’s residents only receiving about four hours a day of electricity. So this is adding to the growing humanitarian crisis that Gaza is facing.

The Israeli military has declared 44 percent of the Gaza Strip as a military zone and warning people in those areas, so essentially pushing in from the border three kilometers. And this is a piece of territory that is, at its widest, nine kilometers wide and, at its narrowest, five kilometers. So, nearly half of the Gaza Strip now has been declared a military buffer zone, and this has caused massive displacement. We’re seeing over 100,000 people being displaced, not just in U.N. schools, but in unfinished buildings, in other people’s homes, in churches. A church, the other day, where some residents—some evacuees were, the graveyard was bombed by the Israeli military. This caused a woman inside to go into labor, and she gave birth inside the church. The Shifa Hospital has become a makeshift refugee camp. There’s many, many residents from Shejaiya, the neighborhood in eastern Gaza City that was razed by the Israeli military on Sunday in one of the bloodiest days of the conflict. I spoke to many people there. They’ve come essentially with nothing. And one of them actually showed me a text message that she received that night from an unknown number—it wasn’t even a number; it was letters—where it received from, and it was a text message in Arabic that said, “You’ve never seen anything like this.” And it was presumably a warning to residents from the Israeli military to Shejaiya residents.

And, you know, when we talk about these numbers of children dying and of the number of Palestinians dead and wounded, it’s much easier to understand them by telling their stories. And today in Shifa Hospital, I was just standing there, and a father, a 30-year-old father, came with his 60-year-old mother up to me asking for help. They said that his wife had just given birth to co-joined twins. They’re joined at the stomach. They share a heart and a liver. And they desperately needed to get out of Gaza to go to Israel or any other country to do surgery to split them and to separate them, and that one of the children would be sacrificed for the other. He told me this story, and he said, “Let’s go see the children. I want to show them to you.” And we walked into the neonatal ward, met the doctor, and the doctor looked at me and said to me in English, so the man wouldn’t understand, that we’re too late, that they had just died. And then he had to inform the father, who broke down in tears. So these are the kinds of stories that you hear. He’s been trying to get the children out, his newborn twins out, for the past few days, but everything’s been closed. And, you know, this is the kind of drama that you see every day under this brutal military assault.

And also, just on another note, this morning the Israeli military hacked into or took over Hamas’s radio station, Al-Aqsa. And so, while we were driving, we heard these warnings, that were a little bizarre, of the Israeli military saying, “Oh, terrorists, you hear the sound of the plane overhead? You are the target.” And then, “Oh, terrorists, best place to feel safe for you is in your grave.” And this is part of the psychological warfare that is going on, as well.

NERMEEN SHAIKH: And, Sharif, very quickly, before we conclude, could you say what you think the prospects are for a ceasefire being reached, given what Palestinian President Mahmoud Abbas has said, backing Hamas—the Hamas position on lifting the economic blockade of the Gaza Strip as a condition?

SHARIF ABDEL KOUDDOUS: Well, I think it’s a very important development. Many Palestinians here were very pleased at the news. And it unites a single Palestinian front in its demands. And, you know, this is, I think, a key thing. Again, like I said yesterday, whenever you talk about what Gazans are asking for, they’re asking for a lifting of this siege, a lifting of this brutal blockade that affects every single aspect of life. When you talk about water, you talk about electricity, you talk about jobs, you talk about the right to work and the right to travel, all of those things existed before the war. The war has exacerbated these effects very severely. So, you know, this is something that all Gazans are calling for, and I think Abbas’s joining with Hamas is an important development in that.

AMY GOODMAN: Sharif, we want to thank you for being with us. Sharif Abdel Kouddous, stay safe, broadcasting from Gaza City, Democracy Now! correspondent. His pieces are appearing in The Nation magazine. We will link to it at democracynow.org.

Not In Our Name: Jewish Activists Arrested in Sit-in at Friends of Israel Defense Forces NYC Office 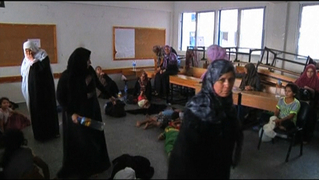