Robert Redford & Will Ferrell in Colorado River Spoof: Raise the River vs. Move the Ocean

We play excerpts from a spoof video standoff between Robert Redford and Will Ferrell about efforts to conserve the Colorado River, which provides much of the American West with water. Redford also discusses the documentary, “Watershed,” that he narrated and made with his son, Jamie Redford. The Colorado River flows nearly 1,500 miles from its source in the Rocky Mountains to the Gulf of California. Along the way, most of its water is diverted by dams for agriculture and municipal uses, and now the river rarely reaches the Sea of Cortez. Redford notes the Native American and Mexican communities in the southern portion of the watershed “are being starved out. They’re having to move away because they can’t have agriculture there.”

AMY GOODMAN: This is Democracy Now!, democracynow.org, The War and Peace Report. I’m Amy Goodman. We’re broadcasting from Park City Television in Park City, Utah, where the Sundance Film Festival is underway. Today we’re spending the hour with the man who founded Sundance, the Oscar-winning director, actor and longtime environmentalist, Robert Redford. As we continued the interview, I asked Robert Redford about his 2012 documentary, Watershed, about the Colorado River, which he made with his son, Jamie Redford, and also narrated. The Colorado River flows nearly 1,500 miles from its source in the Rocky Mountains to the Gulf of California. Along the way, most of the water is diverted by dams, so that it now rarely reaches the sea. I asked Redford why he chose to focus on the Colorado River system, which provides much of the American West with water.

ROBERT REDFORD: I made a documentary about the Colorado River when I found out the Colorado River, which is an iconic trademark of America, you know, doesn’t reach its destination, doesn’t reach the Sea of Cortez. And a lot of people didn’t know that. They didn’t know why. And the seven states use that one water source. And when you add things like golf courses, when you add second-home development, and you add all that stuff, plus the fact that people need the water to survive, it’s a weight. So I thought it would be good to do a documentary that just illustrates what the deal is. And so, that’s why I did.

AMY GOODMAN: So I want to turn to a clip that’s on one of your websites about the Colorado River, and it’s a kind of conversation between you and Will Ferrell.

ROBERT REDFORD: Will Ferrell. That was supposed to be funny.

ROBERT REDFORD: The Colorado River is one of the most loved and hardest-working rivers in the world. But we’ve overused it. Most years, the river dries up even before it reaches the sea. By adding just a small amount of water to the river’s flow, we can help bring life back to the wetlands and marshes in the delta. So, please, would you join me and RaiseTheRiver.org and find out how you can get involved?

WILL FERRELL: Hello there. Hello there. I’m William Ferrell. Recently we’ve been hearing some talk of a little problem in the Colorado River Delta. We got old Sundance riding around, trying to raise the Colorado River and restore its flow. And I say, “Do we really need more river?” I mean, hell, we’ve got plenty of ocean. Let’s move it. Let’s reconnect these things the old-fashioned way, the American way. The way to fix this thing is to send money, so myself and some other scientists can begin the process of moving a small portion of the ocean back toward the wet part of the river, from there to there. Now go to MoveTheOcean.org and send us your money.

ROBERT REDFORD: Hello, Mr. Ferrell. Thank you for your attention. But let’s keep the focus on the wetlands and the wildlife and the people of the delta region.

WILL FERRELL: You’re concerned about the migration patterns of the rufous-sided towhee? You know what I’m concerned about? Surfers. Specifically, American professional surfers. They suffer from a lack of adequate surfable coastline in North America and are forced to travel great distances to enter surf competitions in places like Fiji, Hawaii, Brazil—really far away, OK? We owe it to these fine men and women to move the ocean a few hundred miles in, creating more beach, more waves. Hey, Kelly, how would you feel about more ocean?

WILL FERRELL: See? He’d love it.

WILL FERRELL: Move the ocean.

KELLY SLATER: It was singing?

ROBERT REDFORD: Hello, Mr. Ferrell. I understand very well that you’re one of America’s most beloved entertainers. And you sure are in my book. And that’s—that’s good. Good for you. That’s why I’m sending you this message: Seek help, Will. Soon. You need it.

AMY GOODMAN: So, Will Ferrell wants to move the ocean, you want to raise the river. Explain how you raise a river.

ROBERT REDFORD: Raising the river is just raising the issue of the river, I think. You know, the river not making its way to the Sea of Cortez, what’s the harm in that? Well, I’ll tell you: The harm is that the communities and the cultures that exist in the lower part of the basin are being starved out, they’re having to move away, because they can’t have agriculture there, because they don’t have the water. The water is being used up for other things. Had that water been allowed to continue on the way down, then there’s huge communities of Native Americans, Mexicans, who wouldn’t be starved away. They would be able to thrive. So I think that’s a story that needs to be told. People need to know a story like that.

“It Started as Just a Hope”: Robert Redford on Founding the Sundance Film Festival 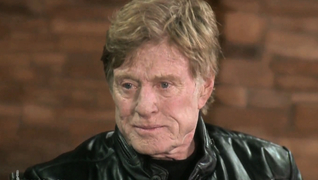