As we broadcast from the Sundance Film Festival in Park City, Utah, we spend the hour with its founder Robert Redford, the Oscar-winning director, actor and longtime environmentalist. Our conversation begins with last week’s vote by nearly half of the Senate to refuse to formally acknowledge the existence of man-made climate change. “I think the deniers of climate change are probably the people who are afraid of change. They don’t want to see change,” Redford says. “Too many in Congress are pushing us back into the 1950s.” He also responds to the attempt by the new Republican majority in Congress to approve construction of the controversial Keystone XL pipeline. “I had a lot of experience with oil,” he says, noting that he once worked in the oil fields. “I think it should stay in the ground. We’re so close to polluting the planet beyond anything sustainable.”

StoryJan 23, 2012Robert Redford Praises Rejection of Keystone Pipeline: We Can’t Afford to Be at the Mercy of Big Oil

AMY GOODMAN: This is Democracy Now!, democracynow.org, The War and Peace Report. I’m Amy Goodman. We’re broadcasting from the Sundance Film Festival in its 31st year. And we’re joined once again by the Sundance founder, Robert Redford. Yes, the acclaimed Oscar-winning director, the actor, the environmentalist.

Welcome back to Democracy Now!, Bob.

AMY GOODMAN: It’s great to have you with us. Well, we’re going to jump right into it, because just a week ago the Senate refused to formally acknowledge the existence of human-induced climate change. Forty-nine Republicans voted against a measure noting human activity significantly contributes to climate change. They voted no. Your response?

ROBERT REDFORD: Well, that’s no surprise. I think it’s pretty obvious what’s going on. I think the deniers of climate change are probably people who are afraid of change. They don’t want to see change. They want to hang onto—they want to hang onto the way things were. And my feeling about the deniers and a lot of other issues that are out there is that too many—too many in Congress are pushing us back into the 1950s. That’s what it feels like. They’re pushing us back in time, rather than forward in time. And I think—why is the reason? Maybe they’re afraid of not being able to be included. I don’t know what it is. But it’s kind of sad, because it’s so polarized and so mean-spirited.

ROBERT REDFORD: My sense of him? I don’t think much of him. What I do think of him, probably I shouldn’t be talking about. No, I’ll tell you, where he really crossed with me was when Obama was elected and he announced, as the minority leader—he said, “Our chief objective is to go against him on everything he tries to do.” And when he said that, I said, “And this guy is going to be a speaker? This feels like un-American.” It felt like an un-American thing to do and say. And from that point on, he’s been relentless in denying and going against. Not great for the American public. A bad representative, in my mind.

AMY GOODMAN: And one of their first acts is to push for the Keystone XL pipeline. It’s very strange to be here with you now, because just a few years ago we were talking about this very subject. President Obama still hasn’t ruled on it, but the Republicans and some Democrats—joined by some Democrats—are pushing forward on the Keystone.

AMY GOODMAN: They also often say that we need this oil to move forward in America.

ROBERT REDFORD: Well, we also need alternative energy, too. I mean, I think that’s the future. I don’t think oil is the future. I think it should probably stay—and this is going to be an unpopular view, but I think—because I worked on an oil field as a kid. I worked in the Chevron oil fields in California. So I’ve had a lot of experience with oil. I think it should stay in the ground now. And I think that we are so close to polluting the planet beyond anything sustainable. I think we better start—say, let’s stop this argument about alternative energy is not going to produce enough jobs. To me, that’s a mistake, because it would produce an industry, and an industry would produce jobs. So I think somebody’s got to speak up for the fact that alternative energy is the way of the future, not oil, certainly not coal and gas. So that’s my feeling.

ROBERT REDFORD: Money is the name of the game. I mean, I think money is what moves the ball, and they’re moving the ball in their direction. I think it’s the wrong direction. It’s very narrow-minded. But they have the money to do it, so—it’s a free country.

AMY GOODMAN: So, some people might be saying right now, why am I talking to this famous actor, an Oscar-winning director, about issues like the environment and money in politics?

ROBERT REDFORD: Well, because I’ve been an—I guess you could call me an activist, since 1969. I’ve been involved in the environment from the standpoint of wanting to draw attention to what an alternative could be, rather than what we’ve been having. And I remember when I was at a conference in Vail, Colorado, and they talked about where all the energy was going. All the effort and the energy and the money was going to oil, gas, coal, and nothing was being contributed to the alternative energy.

And I thought, why? This stuff is going to run out. It’s not infinite. It’s going to run out. And it’s costly. And it pollutes our planet. If somebody doesn’t start thinking about what we’re going to develop for our survival—because I think we are a development-oriented society—it’s going to be a question of what we develop for our survival and what we preserve for our survival. And I think there’s been little to no talk about preservation, because those people that you’re talking about, the McConnells and people like that, they’re living so far in the past, they’re living so much in the past, seems like they’re afraid of the future.

AMY GOODMAN: That’s Robert Redford, Oscar-winning director, actor, environmentalist and founder of the Sundance Film Festival, now in its 31st year. His best-known films include Butch Cassidy and the Sundance Kid, All the President’s Men and The Sting. I spoke to Robert Redford last night here in Park City, Utah, at Sundance Film Festival headquarters. We’ve been broadcasting from Park City Television all week. Coming up, I ask Redford about the history of what’s now one of the largest independent film festivals in the country. It started with just 150 people attending the first year. Now it’s well over 45,000 people. We discuss the festival’s commitment to diversity and promoting women, people of color and young people—on both sides of the camera. I also talked to Redford about his new film premiering here at Sundance, which is a rare occurrence. It’s called A Walk in the Woods. We also talk about his documentary about the Colorado River. All that and more, coming up.

AMY GOODMAN: That’s “No KXL” by Bethany and Rufus. They were singing at a rally in downtown Manhattan ahead of the Senate’s vote on construction of the Keystone XL pipeline last November. Senate Democrats ultimately defeated the legislation by a single vote.

Robert Redford & Will Ferrell in Colorado River Spoof: Raise the River vs. Move the Ocean

NEXTRobert Redford & Will Ferrell in Colorado River Spoof: Raise the River vs. Move the Ocean 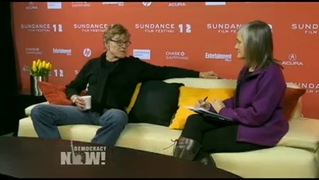 Robert Redford Praises Rejection of Keystone Pipeline: We Can’t Afford to Be at the Mercy of Big Oil