When Ras Baraka was elected mayor of Newark, New Jersey, in May 2014, he entered office as the well-known son of noted global activist and poet Amiri Baraka, with similar radical politics. In his inaugural address, Baraka said, “We need … a mayor that puts his city first, a mayor that never forgets how he got here. We need a mayor that’s radical.” He calls for an “urban Marshall Plan” to invest in cities. “My family has been in Newark almost 100 years,” Baraka said. “There’s nothing been given to those folks—job training, job development, infrastructure redevelopment, roads, bridges, highways, hospitals, schools, putting people to work, giving people jobs and decent education. All that is necessary in a democracy and to move America forward.”

AMY GOODMAN: “Wailers” by Amiri Baraka, the father of the mayor of Newark, New Jersey, Ras Baraka, who is our guest today. I’m Amy Goodman, with Juan González. This is Democracy Now! Juan?

JUAN GONZÁLEZ: Well, last year, Ras Baraka was elected mayor of Newark. I want to go to an excerpt of his inaugural speech.

JUAN GONZÁLEZ: I wanted to ask you about your relationship with two key figures in New Jersey—the governor, Governor Christie, and also the senator, Cory Booker. Governor Christie, I think one of the first times he met you, called you a hostile person.

JUAN GONZÁLEZ: How has that gone since then?

MAYOR RAS BARAKA: Well, you know, Christie, I think, lives in his own mind. The reality is, the meeting we had was nothing close to hostile. I think that was to play out to his supporters, and which is what he does every day, every time he says something on the TV, on the radio. I mean, ultimately, I think that, you know, he’s completely, in my mind, out of touch with what needs to happen in these inner cities, in these urban centers in America. I think he completely has no idea what to do in these communities. As a matter of fact, I think the things that he has done has inhibited growth in these cities, for the most part. And our relationship has been a matter-of-fact kind of relationship. You know, when we need economic development, if I need something, he needs something, so it’s been really transactional and nothing other than that.

AMY GOODMAN: Putting your city into some historical context, I want to go back to 2007 when we interviewed your father, Amiri Baraka, on the 40th anniversary of the 1967 uprising in Newark. He talked about the historical roots of what happened.

AMIRI BARAKA: You have to start with slavery, because those abuses have never been eradicated. You know, people are not living in slums because they voted to. You know, their children are not in jail because they wanted them to. You know, these are the results of a people who have been oppressed and suffer national oppression, you know. And so, in a city like Newark, which is the third oldest city in the United States, by the way, where all these kind of abuses sort of converge, you know, and the racism on top of that—I mean, one absurd example is, one time I was directing a play, and the police rushed into the loft and the man actually took the script out of my hand, you know, as if it was some kind of a volatile weapon, you know.

AMY GOODMAN: That was the great poet, Amiri Baraka. Newark is about to celebrate its 350th anniversary. You talked about changing the prison system. You talked about the problems of re-entry. Trillions of dollars is going into war right now, globally. What difference would it make if that money stayed home in a city like yours, one of the poorest in the country?

MAYOR RAS BARAKA: An immense difference. We’ve been talking the last couple of months about an urban Marshall Plan, about us in these cities not being really able to benefit even from the New Deal. You know, segregation and racism were at its height during the time of the New Deal, when people left the cities and they subsidized these corridors that put people in the suburbs and got them to work in the cities. And now you’re seeing a trend back to the cities. There’s been real neglect in these communities. There’s been neighborhoods that I’ve lived in and looked the same way for the last five decades, you know, buildings that have been hollowed out, vacant lots, I mean, have been destroyed.

Unless they put a bunch of money in and regentrified a neighborhood, then it changes, but nothing in terms of the people that have been there for decades, and their family, even, for centuries. My family has been in Newark almost a hundred years. I mean, so there’s nothing been given to those folks—job training, job development, infrastructure redevelopment, roads, bridges, highways, hospitals, schools, putting people to work, giving people jobs, giving people decent education. All that is necessary in a democracy and to move America forward. I think America will never be what they purport it to be until they begin to invest in its urban centers. And in order for them to be able to do that, they have to get rid of their racism, which disallows them from investing in these cities the way they ought to. If we had that money, there would be a lot that we could do in terms of poverty in these communities, in terms of violence and gun violence, which is really bred by poverty and isolation and anger and, you know, post-traumatic stress. All of that stuff can be dealt with if we had that money.

AMY GOODMAN: Well, Ras Baraka, we want to thank you very much for being with us, the mayor of Newark, New Jersey, elected in May 2014. The city about to celebrate its 350th anniversary.

That does it for our broadcast. If you’d like to get a copy of today’s show, go to democracynow.org. Democracy Now! is hiring a director of development to lead our fundraising efforts. Find out more at democracynow.org. 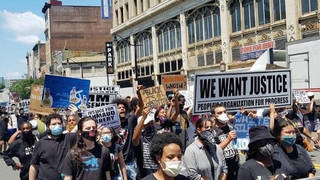