Minnesota Congressman Keith Ellison has joined the chorus of people demanding transparency and the release of the video of the police killing of 24-year-old African American, Jamar Clark, 10 days ago. Authorities say police shot Clark in the head after a scuffle with officers who responded to a report of an assault. But multiple witnesses say Clark was shot while handcuffed. Minneapolis police officers Mark Ringgenberg and Dustin Schwarze have been placed on administrative leave during the investigation. Ellison has also called for a Department of Justice investigation into Clark’s death, which has now begun. During a police raid last Wednesday, a police officer dressed in fatigues and carrying what appeared to be a gas-launching gun pointed his weapon at Ellison’s own son, Jeremiah. “It is a violation of decency,” Ellison says. “Shouldering a weapon against nonviolent protesters is an aggressive act … and it did not help de-escalate the situation at all.”

AMY GOODMAN: Still with us in Minneapolis is Congressmember Keith Ellison, who has joined the chorus of people demanding the release of the video of the police killing of 24-year-old African American, Jamar Clark, 10 days ago. Authorities say Clark was shot in the head after a scuffle with officers who responded to a report of an assault. But multiple witnesses say Jamar Clark was shot while handcuffed. Minneapolis police officers Mark Ringgenberg and Dustin Schwarze have been placed on administrative leave during the investigation.

Well, during a police raid last Wednesday, an officer dressed in fatigues and carrying what appeared to be a gas-launching gun pointed his weapon at Congressman Ellison’s own son, Jeremiah. The next day, Congressman Ellison and other elected officials demanded the release of the footage of Jamar Clark’s death.

AMY GOODMAN: Talk about, first, Jamar Clark, what we understand happened, what the release of this video would mean, and also what happened to your son, not to mention the shooting of these Black Lives Matter protesters.

REP. KEITH ELLISON: Well, my first reaction when I saw the picture of Jeremiah was—was horror. I would gladly face whatever dangers were necessary, but to have my son have to face it is another thing. He’s a 24-year-old guy. He has a strong passion for justice. He’s a professional artist. And he doesn’t think he needs his dad worrying about him like that. But I can’t help it. I remember when he was just a little boy, and now he’s a grown man. And I actually am a little proud that he feels this burning desire to stand up for what’s right and to make a better society. But yet, that picture was very, very disturbing. And we’re going to—not going to let it sit there. I mean, to shoulder a weapon like that at nonviolent protesters is outrageous. It’s a violation of decency. And we’re going to find out whether it’s a violation of law.

AMY GOODMAN: Who is the officer, and why was he doing it?

REP. KEITH ELLISON: Well, that’s a good question. I mean, I think he was doing it to intimidate people. But I think that shouldering a weapon against nonviolent protesters is an aggressive act to certainly incite and provoke people. And it did not help de-escalate the situation at all. And so, this is an issue we’re going to continue to press. But Jeremiah is fine. And, you know, Jamar Clark is not fine. He’s going to be—he has his funeral set for today.

The five young men who were shot by these gunmen, these suspicious gunmen, who for some unknown and bizarre reason thought that they were going to leave where they were, come down to a nonviolent protest and provoke people, and then shoot at people when people raised questions about their intentions, is just a series of provocations. And it is symptomatic of, you know, the issue of racism, injustice, discrimination, and I think that all they’re doing is provoking people to stand up firmer and stronger.

JUAN GONZÁLEZ: And, Congressman Ellison, I want—you’ve called for the release of the Jamar Clark video. We’ve just seen the situation in Chicago, where officials held onto them—

JUAN GONZÁLEZ: —refused to release a key video for 400 days. The importance of the video in this case in Minneapolis?

REP. KEITH ELLISON: Well, let me just say this. The cases are a little different. Here’s why. The first demand that I made was a demand for an independent investigation by the Department of Justice, and we got that. The head of the Civil Rights Division of the Department of Justice agreed to take the case. There have been Justice Department lawyers out here already. This is somewhat unique, because usually the state case has to resolve before the feds will look into violations of federal or criminal civil rights or criminal law. And so, this, the first demand, was met early.

Other demands that have been met have been release of the names of the officers, grief counseling for the victims, the families, and then we’ve had meetings with the governor. There have been meetings with the mayor, all talking about redress of not just these direct issues, but the systemic issues that lead to the tragedies like Jamar Clark’s shooting death at the hands of a Minneapolis police officer. So, the tape demand was really a demand for transparency. We know that in the case of Eric Garner, in the case of Walter Scott, in a whole host of cases, the on-the-scene video was very illuminating in terms of what actually happened.

At this point, my main concern is the independent investigation. My main concern is that we raise issues about the decision to take the case on a state level to the grand jury. I do not think this is the proper course of action. I’m concerned about it, because we’ve never seen a grand jury return a true bill of indictment. Usually, they just go there to get a no bill. And you’ll—you know, and it would be a good thing to explore this issue, because there are a number of cases where—suspicious cases of officer-involved shootings where, you know, the case goes to a grand jury, which is secret, and ends up just being—the case ends up dying there, and then allows public officials to not take responsibility for chargings, decisions.

But the issue of the tape, again, it’s a call for transparency. But I will tell you this. If an independent, thorough investigation requires that the tape be released after witnesses are all interviewed, and if the investigation is not impeded, I think the family and even I could live with that. Again, I practiced law for 20 years. I’ve done many investigations myself. And some people in the federal investigation have indicated that if the tape were immediately released, it would allow certain witnesses, including law enforcement witnesses, to try to conform their testimony to the tape. That, I think, would not be a good outcome. But as long as we know that this is going to be a transparent, aggressive, independent investigation and the tape will be released immediately, I could live with that.

Again, this is very different from the Chicago situation, where the tape was literally delayed, and there had to be a Freedom of Information Act to release the tape. The case had already been resolved on the civil level with a $5 million settlement. And the only reason for not releasing the tape is that it was so incredibly provocative. The reason to not immediately release the tape in this situation is to maintain investigative integrity. And we know that this tape will be released. So, that particular demand, in my opinion, is important, critical and essential, but I think must be subsumed to the larger demand of an independent investigation. We know we’re going to get that tape. We’ve been assured of it, and I don’t think it’s going to take long. But I think the priority is an independent investigation. 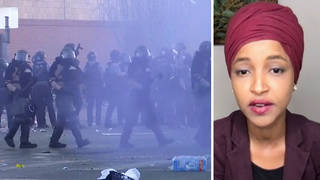