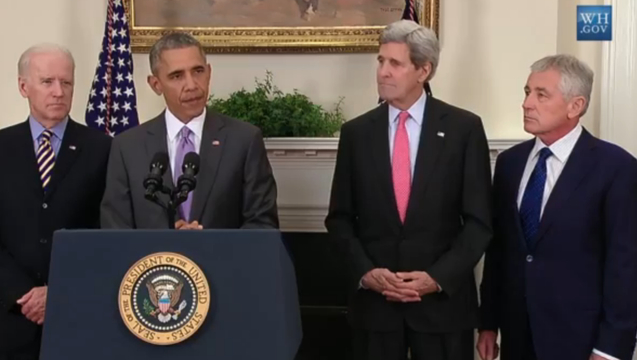 Join the discussion on the Democracy Now! Facebook page.

To the Congress of the United States:

The so-called Islamic State of Iraq and the Levant (ISIL) poses a threat to the people and stability of Iraq, Syria, and the broader Middle East, and to U.S. national security. It threatens American personnel and facilities located in the region and is responsible for the deaths of U.S. citizens James Foley, Steven Sotloff, Abdul-Rahman Peter Kassig, and Kayla Mueller. If left unchecked, ISIL will pose a threat beyond the Middle East, including to the United States homeland.

I have directed a comprehensive and sustained strategy to degrade and defeat ISIL. As part of this strategy, U.S. military forces are conducting a systematic campaign of airstrikes against ISIL in Iraq and Syria. Although existing statutes provide me with the authority I need to take these actions, I have repeatedly expressed my commitment to working with the Congress to pass a bipartisan authorization for the use of military force (AUMF) against ISIL. Consistent with this commitment, I am submitting a draft AUMF that would authorize the continued use of military force to degrade and defeat ISIL.

My Administration’s draft AUMF would not authorize long-term, large-scale ground combat operations like those our Nation conducted in Iraq and Afghanistan. Local forces, rather than U.S. military forces, should be deployed to conduct such operations. The authorization I propose would provide the flexibility to conduct ground combat operations in other, more limited circumstances, such as rescue operations involving U.S. or coalition personnel or the use of special operations forces to take military action against ISIL leadership. It would also authorize the use of U.S. forces in situations where ground combat operations are not expected or intended, such as intelligence collection and sharing, missions to enable kinetic strikes, or the provision of operational planning and other forms of advice and assistance to partner forces.

Although my proposed AUMF does not address the 2001 AUMF, I remain committed to working with the Congress and the American people to refine, and ultimately repeal, the 2001 AUMF. Enacting an AUMF that is specific to the threat posed by ISIL could serve as a model for how we can work together to tailor the authorities granted by the 2001 AUMF.

I can think of no better way for the Congress to join me in supporting our Nation’s security than by enacting this legislation, which would show the world we are united in our resolve to counter the threat posed by ISIL. 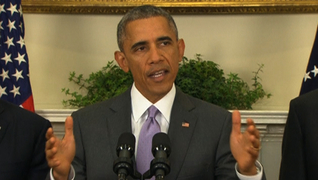