President Obama has sent Congress a formal request to authorize military force against the Islamic State six months after the U.S. began bombing Iraq and Syria. The resolution imposes a three-year limit on U.S. operations, but does not put any geographic constraints. It also opens the door for ground combat operations in limited circumstances. The resolution’s broad language covers military action against the Islamic State as well as “individuals and organizations fighting for, on behalf of, or alongside [ISIS] or any closely-related successor entity in hostilities against the United States or its coalition partners.” The resolution also leaves in place the open-ended Authorization for Use of Military Force Congress enacted one week after the Sept. 11, 2001, which has been used to justify U.S. action in Afghanistan, Somalia, Pakistan, Yemen and beyond, and which Obama had previously called for repealing. We speak with Norman Solomon, executive director of the Institute for Public Accuracy and author of many books, including “War Made Easy: How Presidents and Pundits Keep Spinning Us to Death.”

NERMEEN SHAIKH: President Obama has sent Congress a formal request to authorize military force against the Islamic State six months after the U.S. began bombing Iraq and Syria. The resolution imposes a three-year limit on U.S. operations, but it does not put any geographic limits on the military campaign. It also opens the door for ground combat operations in some circumstances. Obama spoke at the White House Wednesday, flanked by Vice President Joe Biden, Secretary of State John Kerry and outgoing Defense Secretary Chuck Hagel.

PRESIDENT BARACK OBAMA: Today my administration submitted a draft resolution to Congress to authorize the use of force against ISIL. I want to be very clear about what it does and what it does not do. This resolution reflects our core objective: to destroy ISIL. It supports the comprehensive strategy that we’ve been pursuing with our allies and our partners: a systemic and sustained campaign of airstrikes against ISIL in Iraq and Syria; support and training for local forces on the ground, including the moderate Syrian opposition; preventing ISIL attacks in the region and beyond, including by foreign terrorist fighters who try to threaten our countries; regional and international support for an inclusive Iraqi government that unites the Iraqi people and strengthens Iraqi forces against ISIL; humanitarian assistance for the innocent civilians of Iraq and Syria, who are suffering so terribly under ISIL’s reign of horror.

AMY GOODMAN: Questions over the language in the resolution have been raised by both hawkish Republicans and antiwar Democrats in Congress. The resolution’s broad language covers military action against the Islamic State as well as, quote, “individuals and organizations fighting for, on behalf of, or alongside [ISIS] or any closely-related successor entity in hostilities against the United States or its coalition partners.” The resolution also leaves in place the open-ended Authorization for Use of Military Force Congress enacted one week after the September 11th attacks, which has been used to justify U.S. action in Somalia, in Pakistan, in Yemen and beyond.

Joining us now from San Francisco is Norman Solomon, executive director of the Institute for Public Accuracy, co-founder of RootsAction.org, author of many books, including War Made Easy: How Presidents and Pundits Keep Spinning Us to Death.

Norman, welcome to Democracy Now! Can you talk about this latest effort by President Obama to get war authorization?

NORMAN SOLOMON: Well, unfortunately, in political terms, it represents a sort of repetition compulsion disorder, back to the future from an administration that came in saying it was going to dispense with the concept—or at least the phraseology—of a war on terror, an administration that even today, through the president’s statement, is again asserting that it’s against endless war, and yet both the statement from the president yesterday and the resolution—and, for that matter, the White House policy—is explicitly endless, perpetual war. And that’s the kind of policy we’re getting.

NERMEEN SHAIKH: And, Norm, can you explain why he placed a three-year limit then on U.S. operations?

NORMAN SOLOMON: Window dressing, just a scam, just a way to give a sort of a fig leaf to the people called antiwar Democrats or some libertarian Republicans. But it’s just a way of sort of rowing the boat with a little bit of a deference to the right and left in Congress, that what it boils down to is kicking the war can down the road—a very bloody one, to put it mildly—and absolutely running a manipulative public relations campaign.

AMY GOODMAN: We’re hearing numbers like there are 200,000 members of ISIS, or people fighting, identifying themselves as ISIS. This number has just gone up astronomically. Is there any way to verify the kind of information that comes out at a time like this, when war is being voted on in Congress?

NORMAN SOLOMON: Well, historically, and in the present day, there is no way to verify whatsoever. You could depend on some inflation, to put it mildly. We also heard from the president yesterday that there were 2,000 airstrikes by the United States in the region, in the Middle East, in the last six months, but we don’t know if that’s true at all. And in tandem with its war on whistleblowers and true investigative journalism, this administration is operating in overdrive as sort of a fog machine to try to keep from the American people realities of the war policy, because clearly this White House prefers the uninformed consent of the governed.

NERMEEN SHAIKH: Norm, could you comment on the timing of Obama’s request? It came just a day after American aid worker Kayla Mueller’s death was confirmed. He also mentioned her in his remarks.

NORMAN SOLOMON: Well, these terrible atrocities by the so-called Islamic State really provide fuel for the machinery of propaganda from the executive branch of the United States, clearly chomping at the bit to drag this country further into war. And I think it’s very symbolic that—and literally significant, as well—that the 2001 Authorization for Use of Military Force is not being challenged or proposed for ending by this administration. So, that very open-ended authorization right after 9/11 is one that the administration is embracing and trying to ride for all it can, essentially, in search of enemies. And if there are no geographical or conceptual or state boundaries that will define this war coming out of the U.S. government, then the search for enemies is open-ended and infinite.

AMY GOODMAN: I want to turn to Kofi Annan—

NORMAN SOLOMON: And I should add, not only a search for enemies that’s infinite, but the creation of enemies, because this administration not only preaches against endless war while doing more than any other presidency to make endless war policy, but this administration is second to none in creating enemies of the United States around the world. And so the spin cycle, the war cycle, the destructive cycle continues.

AMY GOODMAN: Norman Solomon, I wanted to turn to the former U.N. secretary-general, Kofi Annan. Over the weekend, he spoke at the Munich Security Conference, suggesting the U.S.-led invasion of Iraq created the Islamic State.

KOFI ANNAN: The second and much more proximate cause of the instability we are witnessing today was the invasion of Iraq in 2003. I spoke against it at the time, and I’m afraid my concerns have been proved well-founded. The folly of that fateful decision was compounded by post-invasion decisions. The wholesale disbandment of security forces, among other measures, poured hundreds of thousands of trained and disgruntled soldiers and policemen onto the streets.

NORMAN SOLOMON: It’s a good point, but when you go back to that time—and I think, Amy, you and I spoke about the impending invasion of Iraq, you know, more than a decade ago—Kofi Annan could have been much stronger in his post at the United Nations in opposing it. And frankly, there are all too many people in Washington, as well, who in retrospect say what terrible tragedies are or have unfolded, but at the time, they don’t have a whole lot of backbone, they don’t challenge the administration. And years from now, we’re going to have people who were in Congress right now who will say what a terrible tragedy yesterday’s statement and offered resolution from the Obama White House was. But right now, we’re not hearing them speaking out very strongly. And it’s incumbent on all of us to speak out and stop this despicable push towards escalation of yet more war from the Obama White House.

AMY GOODMAN: Norman Solomon, we’re going to break and then come back to ask you about the suspension of Brian Williams for lying about Iraq, and we want to talk to you about the Sterling trial. Then we’re going to go on to talk about what happened in North Carolina near the University of North Carolina, the three young students, two sisters and one of their, well, new husband, who were just gunned down, the police say over a parking spot, their family says it’s hate crime. Stay with us. 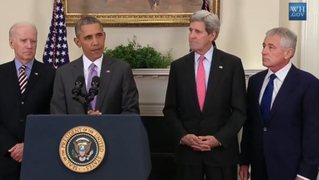