NBC News has suspended anchor Brian Williams for six months without pay for making false statements about a 2003 incident in Iraq. Williams apologized last week after it emerged he had wrongly claimed he was on board a U.S. helicopter downed by rocket fire. American soldiers publicly challenged Williams’ account, saying he was nowhere near the aircraft that came under attack. Williams has blamed the “fog of memory” for his mistake. But in a statement, NBC said Williams’ claims were “wrong and completely inappropriate for someone in Brian’s position.” We are joined by Norman Solomon, author of “War Made Easy: How Presidents and Pundits Keep Spinning Us to Death.”

Web ExclusiveFeb 10, 2015It’s Not Just Brian Williams… Inside the Media’s Lies that Led to Iraq War

NERMEEN SHAIKH: We’re speaking to media critic Norman Solomon. I want to ask you about NBC News’s suspension of anchor Brian Williams for making false statements after he wrongly claimed he was on board a U.S. helicopter downed by rocket fire in Iraq in 2003. Norman Solomon, you wrote the book, War Made Easy: How Presidents and Pundits Keep Spinning Us to Death. Can you talk about Brian Williams and the other lies around the Iraq War?

NORMAN SOLOMON: Well, Brian Williams was, of course, one of the many mass media spinners, not only for the invasion of Iraq, but later catastrophic interventions in Libya and elsewhere. This suspension story, the falsehood told by Brian Williams, is the kind of story that the mass corporate media absolutely love, because it’s about an individual personality, it’s not about structural power; it’s about a personal flaw or a misstatement or deception or lie, if you will, but not about constant streams of lies coming from institutions such as NBC News and many others that have billions of dollars of capital behind them.

And I think it’s important for us to remember that Brian Williams has run afoul of his fabulations, his lie that was told repeatedly to puff himself up in the context of glorifying the very kind of militarism that he was part of promoting in the first place. And if you look at his career—as of, unfortunately, many of his colleagues—we have to understand, or I think it’s important for us to understand, that the real tragedies, the real transgressions against truth, are virtually never challenged, almost never challenged, by those folks’ colleagues. And I would just sum it up this way: The Wall Street Journal front page yesterday described what Williams had done as telling a false war story, but in fact Williams and his colleagues are in the business of telling false war stories every day to, in effect, justify U.S. military interventions.

AMY GOODMAN: Interestingly, Norm, on Tuesday, Williams’ former boss at NBCUniversal, Bob Wright, defended Williams by pointing to his favorable coverage of the military, saying, quote, “He has been the strongest supporter of the military of any of the news players. He never comes back with negative stories, he wouldn’t question if we’re spending too much.” Your response to this?

NORMAN SOLOMON: Yeah, well, in the corridors of power, being a suck-up to the U.S. military is a high praise and qualification. And, in fact, those journalists who have challenged the escalation, the automatic support for whatever the president wants in terms of going to war, those folks hit a glass ceiling pretty quickly within the media establishment. 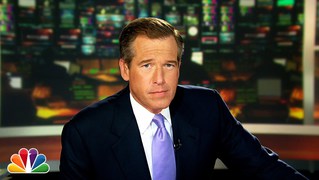