In January, a federal jury in Virginia convicted former CIA officer Jeffrey Sterling on nine felony counts, including espionage. Prosecutors accused Sterling of leaking classified information about a secret operation to disrupt Iran’s nuclear program to journalist James Risen of The New York Times. Risen later revealed how the risky operation could have inadvertently aided the Iranian nuclear program. Supporters of Sterling described him as a whistleblower, but prosecutors claimed he leaked the information to settle a score with the agency. Sterling is scheduled to be sentenced in April. He faces a maximum possible sentence of decades in prison. We speak with Norman Solomon, who reported from the Sterling trial. “We’ve got to support investigative journalists and whistleblowers. We can’t allow the government to drive a wedge between the two,” Solomon says, co-founder of RootsAction.org, which has launched public campaigns to support both Sterling and Risen.

NERMEEN SHAIKH: Well, Norman, I also want to ask you about the recent conviction of Jeffrey Sterling, the former CIA officer who leaked classified information about a secret operation to disrupt Iran’s nuclear program to journalist James Risen of The New York Times. You were in the courtroom for the trial. Can you talk about the significance of the case?

NORMAN SOLOMON: An extremely important case, very underreported by the news media, a tremendous selective prosecution against one of the only African-American case officers in the CIA, somebody who went through channels as a whistleblower to the Senate Intelligence Committee to report in 2003 about a dumb and dangerous CIA operation aimed at Iran with nuclear design component information back in 2000. So, Sterling went on trial last month in federal court for revealing to the Senate Intelligence Committee something that the Senate Intelligence Committee needed to know, but the actual charges were, as you mentioned, that he leaked the classified info to James Risen. Being in the courtroom day after day for the seven-day trial, very disturbing, not only the selective prosecution, but also the fact no African Americans on the jury, 23 CIA officials testifying, and a tremendous amount of innuendo against the defendant in that case.

So, I really urge people to look into it more closely, because Jeffrey Sterling deserves support. All of the evidence presented by the prosecution was circumstantial. It was metadata, email and phone call metadata, without content of any incriminating nature. So the bottom line is, Jeffrey Sterling is facing a nine-count sentencing of federal felonies, up to 80 years in prison, on the basis of circumstantial evidence that is metadata. And let me announce right now that RootsAction.org today is launching a support campaign for the Sterling family fund, and people who want to find out more about that fund can go to RootsAction.org.

AMY GOODMAN: Norman Solomon, of course, James Risen got a lot more attention, the Pulitzer Prize-winning New York Times journalist who was being prosecuted, persecuted by both—from the Bush administration right through the Obama administration, but he was saying, no matter what happened, whether he would go to jail or not, he would not reveal his source. So, the fact that he didn’t do this, but did ultimately—did agree to be questioned, what was the significance of this?

NORMAN SOLOMON: Well, ultimately, I think that James Risen was very honorable and principled. He never gave any information to the court or anyone else to help the government identify any of his sources. And the government was clearly trying to push Risen up against the wall. He refused to flinch, and he stuck with his principles.

Speaking of principles, at RootsAction.org and elsewhere, in organizing campaigns on behalf of James Risen and now on behalf of Jeffrey Sterling, we’re really resolute with the principle that we’ve got to support investigative journalists and whistleblowers. We can’t allow the government to drive a wedge between the two. You can’t have the informed consent of the governed unless you have whistleblowers who give us the unofficial stories and journalists who are willing and able to report them.

AMY GOODMAN: Norman Solomon, we want to thank you for being with us, executive director of the Institute for Public Accuracy, co-founder of RootsAction.org, author of many books, including War Made Easy: How Presidents and Pundits Keep Spinning Us to Death. This is Democracy Now!, democracynow.org, The War and Peace Report. I’m Amy Goodman, with Nermeen Shaikh. 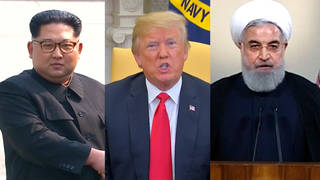