A new report from the Israeli group Breaking the Silence on Israel’s policy of indiscriminate fire during the 2014 Gaza assault comes just a week after a United Nations probe confirmed Israeli forces conducted direct attacks on its facilities in Gaza during last summer’s offensive. The attacks took place despite repeated notifications with the GPS coordinates of U.N. sites to Israeli forces. Palestinians have vowed to bring the findings to the International Criminal Court, which it officially joined last month. We discuss the implications of Palestine’s accession to the ICC with two guests: Ambassador Nabil Abuznaid, head of the Palestinian Mission to the Netherlands, and John Dugard, former U.N. special rapporteur on human rights in the Palestinian territories and emeritus professor of international law at the University of Leiden in the Netherlands.

JUAN GONZÁLEZ: The Breaking the Silence report on Israel’s “policy of indiscriminate fire” during the 2014 Gaza assault is being published just a week after a United Nations probe confirmed Israeli forces conducted direct attacks on United Nations facilities in Gaza, killing at least 44 Palestinians sheltering at those sites during last summer’s offensive. The attacks took place despite repeated notifications to Israeli forces of the GPS coordinates of U.N. sites.

AMY GOODMAN: What kind of pressure did you come under? Israel and the United States were opposed to you making this bid to be a member.

NABIL ABUZNAID: Well, they can oppose as much as they want. They can stop the money from going to the ICC. They can shut a building. But they cannot stop justice. I think justice, in the end, will prevail.

AMY GOODMAN: John Dugard, in terms of international law, what’s the significance of Palestine becoming a member of the International Criminal Court?

JOHN DUGARD: In the first place, it does give credibility to Palestine’s statehood. Palestine is now a fully fledged member of the International Criminal Court. And even those states in the court system that do not recognize Palestine have to accept that it is a state at least for the purposes of the International Criminal Court. The other important factor is that it does now provide an avenue for the pursuit of international criminal justice.

AMY GOODMAN: What, Ambassador, do you want the International Criminal Court to investigate? What is before the court?

NABIL ABUZNAID: Well, I think Palestinians, for more than 60 years, they did not have one day of justice. And what is the daily going under the occupation, it is clearly violations of international law—in moving people from their land, in stopping people from their freedom in movement, in attacks on Gaza and killing thousands of people. I am sure Israel violated every international law in the book in its long occupation in Palestine.

AMY GOODMAN: What is the particular case before the court right now, John Dugard?

JOHN DUGARD: I think there are three major crimes that the court will be required to investigate. First of all, there is the question of settlements. There are today over 700,000 illegal Israeli settlers in Palestinian territory, and that is an international crime in terms of the Rome Statute and general international law. So that’s the first crime. The second crime, and probably the most important, concerns the recent Gaza conflict, Operation Protective Edge, where Israel was responsible for killing 2,200 people and failing to distinguish between civilians and combatants. So, that clearly is at least a war crime, probably a crime against humanity, as well. And there’s also the failure of Israel to treat political prisoners as prisoners of war, which I know is an issue that is important to the Palestinian Authority.

AMY GOODMAN: Just to clarify, John Dugard, there’s no particular case that’s been brought up right now with the newest membership of Palestine.

JOHN DUGARD: The prosecutor of the court has decided to conduct a preliminary examination into the issue. And in order to decide whether or not to conduct a full-scale investigation into the allegations of international crimes, she will have to be satisfied, first of all, that an international crime was committed; secondly, that there is no investigation, proper investigation, that is being conducted in the responding state, which in this case will be Israel; and, thirdly, that the crime is sufficiently serious, that it meets what’s called the gravity test.

AMY GOODMAN: Ambassador Abuznaid, are you concerned that Palestinians, Palestinian organizations will be indicted, as well?

NABIL ABUZNAID: Well, when we accepted the Rome Statutes, we are not immune. We will cooperate with the court. If we need to be investigated, we are willing to do that. We accepted to live under international law. And if we are violating international law, we would be responsible for our acts equally. And I hope the Israelis would see the same as we do.

AMY GOODMAN: Speaking to a congressional panel in 2014, U.N. Ambassador Samantha Power said the U.S. will continue to block Palestinian efforts in forums like the United Nations.

SAMANTHA POWER: There are no shortcuts to statehood, and we’ve made that clear. Efforts that attempt to circumvent the peace process, the hard slog of the peace process, are only going to be counterproductive to the peace process itself and to the ultimate objective of securing statehood, the objective that the Palestinian Authority, of course, has. So, we have contested every effort, even prior to the restart of negotiations spearheaded by Secretary Kerry. Every time the Palestinians have sought to make a move on a U.N. agency, a treaty, etc., we have opposed it.

AMY GOODMAN: John Dugard, your response to the U.S. ambassador to the U.N., Samantha Power?

JOHN DUGARD: Well, I think the strategy of Israel and also of the United States is simply to allow talks to go on forever and ever, while Israel annexes more land and takes over Palestinian territory. The purpose of the International Criminal Court, as I see it, is to circumvent this strategy on the part of Israel and the United States and to make Israel and the United States see and face the issues very clearly—namely, that Israel has committed very, very serious international crimes. And I might add that I’m a South African who lived through apartheid. I have no hesitation in saying that Israel’s crimes are infinitely worse than those committed by the apartheid regime of South Africa.

JOHN DUGARD: For seven years, I visited the Palestinian territory twice a year. I also conducted a fact-finding mission after the Operation Cast Lead in Gaza in 2008, 2009. So I am familiar with the situation, and I am familiar with the apartheid situation. I was a human rights lawyer in apartheid South Africa. And I, like virtually every South African who visits the occupied territory, has a terrible sense of déjà vu. We’ve seen it all before, except that it is infinitely worse. And what has happened in the West Bank is that the creation of a settlement enterprise has resulted in a situation that closely resembles that of apartheid, in which the settlers are the equivalent of white South Africans. They enjoy superior rights over Palestinians, and they do oppress Palestinians. So, one does have a system of apartheid in the occupied Palestinian territory. And I might mention that apartheid is also a crime within the competence of the International Criminal Court.

AMY GOODMAN: You say, John Dugard, that the situation in the Palestinian territories is worse than apartheid. What would an apartheid case brought to the International Criminal Court look like? Again, you were the special rapporteur, the U.N. special rapporteur on human rights in the Palestinian territories, as well as being a South African and an international rights lawyer.

JOHN DUGARD: Well, of course, I think it’s important to stress that the whole international environment has changed since the end of apartheid, because the apartheid regime, fortunately for itself, did not have to face a legal action either before an international criminal court or before a national court, whereas Israel today does face action before an international court. Of course, the crimes are substantially the same: discrimination, repression, targeted assassinations, house demolitions. I think, in one respect, Israel’s crimes are much worse, and that is in respect of its military action against Gaza, where it has not hesitated to kill civilians indiscriminately.

AMY GOODMAN: The U.N. has confirmed that Israeli forces conducted direct attacks on United Nations facilities in Gaza, killing at least 44 Palestinians sheltering at the sites during last summer’s assault, the attacks taking place despite repeated notifications with the GPS coordinates of U.N. sites given to Israeli forces. Ambassador Abuznaid, your response to what the U.N. found? And what does this mean? I mean, Palestinians have been alleging this for quite some time now.

NABIL ABUZNAID: Well, I think this is not just the Palestinians saying it. This is Mr. Ban Ki-moon and the investigation saying that the Israelis killed, deliberately, innocent Palestinian civilians who have taken shelters in some of the U.N. buildings. And this is a violation of international law. But one comment I would like to say, as a Palestinian, regardless to the suffering of the Palestinian people, to our people through, you know, all this century, and now what happened in Syria, even in the Netherlands—we got 15,000 arrived here on boats, hundreds were drowned in the waters—we are not seeking revenge. Only we want justice for our people, who did not see one single day of justice. Hopefully, that justice would prevail soon.

AMY GOODMAN: Israel is not a member of the International Criminal Court.

AMY GOODMAN: The United States is not a member of the International Criminal Court.

JOHN DUGARD: That is correct.

AMY GOODMAN: So, the significance of this, why they are not members?

JOHN DUGARD: Well the United States has given a number of reasons for failing to become a full member of the International Criminal Court. And one must remember that neither China nor the Russian Federation are members of the International Criminal Court. There are general reasons given by the United States. In the case of Israel, Israel has not become a party, because it has something to hide. It clearly does not wish to see its own military leaders and its political leaders targeted.

AMY GOODMAN: This is Democracy Now!, democracynow.org. When we come back, the NSA can turn your phone conversations into text, then search it? Stay with us.

AMY GOODMAN: “Everything is Everything” by Lauryn Hill. Lauryn Hill just canceled a concert in Israel, saying she had wanted to do one in both Israel and the Occupied Territories, and the one in the territories just wasn’t being able to happen. This is Democracy Now!, democracynow.org, The War and Peace Report. I’m Amy Goodman, with Juan González. 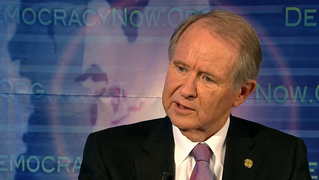