Today marks the deadline for Iran and six world powers to reach a comprehensive agreement on curbing Iran’s nuclear program. Iran has dispatched two top officials to Vienna in a last-minute push for a diplomatic breakthrough, but the talks will likely be extended. The outstanding differences include access to international inspectors and Iranian nuclear activity in the deal’s final years. Negotiators are also trying to determine the timing of sanctions relief and the scope of Tehran’s nuclear research. We are joined from Tehran by Reza Sayah, a journalist who has covered Iran for CNN International for the last seven years.

AMY GOODMAN: Today marks the deadline for Iran and six world powers to reach a comprehensive agreement on curbing Iran’s nuclear program. Iran has dispatched two top officials to Vienna in a last-minute push for a diplomatic breakthrough. On Monday, U.S. State Department spokesperson Mark Toner expressed confidence a deal is within reach, but said negotiations may slip past today’s deadline.

MARK TONER: These talks—and it’s looking more likely now—could go beyond June 30th for a few days, if we need additional time to conclude, frankly, a strong, comprehensive agreement. And that’s still our attitude. You know, we’re still focused on getting the best agreement possible, the most comprehensive agreement possible, and if we have to work a little bit longer to do that, the team in Vienna, then they’ll do so, obviously. But nobody is talking about a long-term extension.

SECRETARY OF STATE JOHN KERRY: I think it’s fair to say that we’re hopeful. We have a lot of hard work to do. There are some very tough issues. And I think we all look forward to getting down to the final effort here to see whether or not a deal is possible. I think—I think everybody would like to see an agreement, but we have to work through some difficult issues.

AMY GOODMAN: The outstanding differences include access to international inspectors and Iranian nuclear activity in the deal’s final years. Negotiators are also trying to determine the timing of sanctions relief and the scope of Tehran’s nuclear research.

For more, we go directly to Tehran, Iran, where we’re joined by Reza Sayah. He has covered Iran for CNN International for the past seven years. After his coverage of the 2009 anti-government protests, Iranian authorities denied him permission to work for two years. He later returned to Tehran to report on the ongoing nuclear talks, the 2013 presidential elections and last year’s signing of the interim nuclear deal. He also works with the Blossom Hill Foundation, which helps children impacted by war.

Reza Sayah, welcome to Democracy Now! Talk about this deadline and what is happening in Iran.

REZA SAYAH: Well, the two sides are pushing to get a deal done, and the talks are reaching a crescendo. And you can sense it, because all the big names from all sides are now in Vienna. This morning, Mohammad Javad Zarif, the Iranian foreign minister, arrived there, reportedly saying that he has received the mandate from top officials to reach a deal. President Hassan Rouhani’s brother is there. The top nuclear official in Iran, Ali Akbar Salehi, is there. And, of course, all the top diplomats from the P5+1, they’re there, as well.

It’s going to be very difficult to gauge where things stand throughout these two years in these negotiations. All sides have done a pretty remarkable job in keeping things under wraps. So I think in the next few days there’s going to be a lot of waiting, a lot of reporters waiting in Vienna. Here, much of the country is eagerly awaiting an outcome. And I think that’s going to be the case until the sides come out and make some sort of announcement. There have been a lot of vague comments. They seem to be optimistic that a deal is within reach, but they also point out that sticking points and obstacles remain.

AMY GOODMAN: What are those sticking points and obstacles, Reza?

REZA SAYAH: Well, the sticking points include the number and types of centrifuges. In the deal that was signed, the framework deal that was signed in April, Iran agreed to reduce its centrifuges from 19,000. It’s not clear if the West is pushing for an increased reduction or if Iran is pushing to keep more. Then you have the scope of the inspections. Iran has all along allowed the IAEA to inspect its nuclear facilities. And when the framework was agreed on, they agreed to what’s called an additional protocol, which gives the IAEA a higher authority for increased inspections. But the West, the U.S. has given indications that they want to inspect some military facilities, and Iran has said, you know, that’s a redline, that they’re not going to allow inspections in military facilities. Then you have research and development. The West wants to limit Iran’s research and development when it comes to the nuclear program. And finally, the pace of the sanctions. Iran insists that the sanctions should be lifted once the pen hits the paper and an agreement is signed. The West, the U.S. says it’s going to be a gradual lifting of the sanctions. The most likely scenario is that it will be a gradual lifting of the sanctions, but it still remains to be seen what the time frame is and how long that’s going to take. Obviously, Iran wants it to happen faster, and the U.S. doesn’t.

AMY GOODMAN: Reza Sayah, can you talk about the main forces against it?

REZA SAYAH: Well, I think it’s important to point out that the main forces against this agreement are in the minority—namely, the Israeli government, who has continued to raise concerns about this deal; you have the Saudis with their—with their concern; and obviously you have the U.S. Congress. You know, I think last month they pushed through a bill that enables them to review this agreement once it’s signed. If the deal is signed before July 9th, Congress has 30 days to review it; if the deal is signed beyond the July 9th date, they have 60 days to sign. But it’s important to point out that other than these groups—the U.S. Congress, the Israeli government and the Saudi government—the majority of the world, and including the world powers, are for a negotiated agreement for Iran to have a peaceful nuclear program. However, these forces, as you say, against this deal, they have a lot of influence. They oftentimes dominate the media. And that’s what you’ll see if an agreement is signed. You’ll see the Israeli government, you’ll see U.S. Congress, you know, raising the alarm again. And it will be interesting to see where things go from here.

AMY GOODMAN: Reza Sayah, we are having a little trouble with your audio, so I want to thank you for being with us. Reza has covered Iran for CNN International for the last seven years. After his coverage of the 2009 anti-government protests, Iranian authorities denied him permission to work for two years, but then he later returned to Tehran, where he covered a number of the political developments there. This is Democracy Now!, democracynow.org, The War and Peace Report. 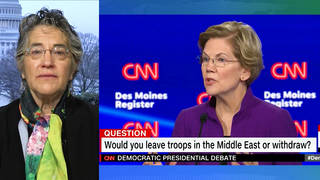