Democratic presidential hopeful Bernie Sanders recently convened a panel of economists in Washington to discuss the debt crisis in Greece and throughout the world. In his opening statement, Sanders talked about the debt crisis in Greece as well as in Puerto Rico. “It is time for creditors to sit down with the governments of Greece and Puerto Rico and work out a debt repayment plan that is fair to both sides,” Sanders said. “The people of Greece and the children of Puerto Rico deserve nothing less.”

AMY GOODMAN: We turn to Democratic presidential hopeful Bernie Sanders, who recently convened a panel of economists in Washington to discuss the debt crisis in Greece as well as, well, throughout the world. Senator Sanders said austerity has worsened the situation in Greece. This is some of what he had to say.

SEN. BERNIE SANDERS: [What] we are here today to talk about is the very, very important issue regarding the ongoing debt crisis in Greece and the way that people and governments all over the world are struggling with too much debt. This is—we’re going to be focusing on Greece, but, in truth, this issue goes beyond Greece. And countries that are struggling not only with too much debt, too much inequality, and too little growth and income.

Today, as I think all of you know, there is a very, very serious economic situation unfolding in Greece. In many ways, Greece today resembles the United States of the 1930s in the midst of the worst depression, economic downturn in the history of our country. The Greek economy has basically collapsed, and the people of Greece are trapped in a very, very deep depression.

I want to begin by expressing my solidarity with the people of Greece, where five years of cruel and counterproductive austerity policies, policies demanded by the European Central Bank, the European Commission and International Monetary Fund, have left the people of Greece facing a full-blown humanitarian crisis. In my view, there is no more obvious example of the failure of austerity policies than what is going on in Greece.

For more than five years, Greece has cut pensions. Greece has slashed its government workforce. Greece has made deep spending cuts that have eviscerated its social safety net. In other words, despite what we have been led to believe by many in the media, Greece has not gone on a shopping spree. It has not overfunded its government. Rather, it has imposed massive spending cuts that have caused devastating pain to some of its most vulnerable people. It has done this because its creditors, led by Germany, have insisted that austerity is the only way to dig Greece out of its debt.

As a result, today, Greece has the highest levels of inequality and the worst unemployment rates in Europe. The official unemployment rate is 26 percent—26 percent. Youth unemployment in Greece today is more than 50 percent. More than 30 percent of the people in Greece are living in poverty. And the Greek economy is 25 percent smaller, has shrunk by 25 percent over the last five years. That is really quite incredible.

Instead of solving the problem, austerity, in my view, has made a bad situation much worse. Greece has seen its debt-to-GDP ratio shoot up from about 120 percent to about 175 percent today. And now to, quote-unquote, “fix” the problem, the troika wants Greece to borrow more money and make deeper cuts to wages, pensions and other social programs.

In January, as you all know, the people of Greece stood up and said, “Enough is enough.” They elected a new government, known as Syriza. Their promise: to end the harsh austerity policies—that was their campaign pledge—by increasing their minimum wage, by increasing job production, by protecting the most vulnerable against pension cuts, and ensuring that the wealthiest people in Greece started paying their fair share of taxes, a very serious problem in that country. But instead of working with the new government to find a rational path forward, the troika demanded more austerity than ever.

On July 5th, the people of Greece spoke once again: In an overwhelming show of solidarity with their government, 61 percent of the people of Greece said no to more austerity for the poor, for the children, for the sick and for the elderly. Yet, instead of working with the Greek government on a sensible plan that would allow Greece to improve its economy and pay back its debt, Germany and the troika continued to push Greece to accept even greater austerity.

I believe that this plan is simply unsustainable. In my view, austerity has failed, and continuing with austerity means the Greek economy will continue to fail its people. Unemployment, poverty and inequality will increase from already obscene levels.

And maybe, just maybe, some people are beginning to wake up to this reality. In a confidential report that was made public earlier this month, officials from the IMF warned that the IMF could not take part in any new bailout for Greece unless the Greek government was offered a substantial debt relief package as part of any new deal. In light of this report, it is time for the troika to provide the Greek government with the flexibility it needs to create jobs, raise wages and improve its economy. Without a substantial improvement in its economy, Greece will never escape its debt crisis.

And let us not forget a little bit about history. Let us not forget what happened after World War I, when the Allies imposed oppressive austerity on Germany—on Germany—as part of the Versailles Treaty. And I think all of you who know anything about history understand what happened. And that is, the Germany economy collapsed, unemployed skyrocketed, people were pushing their money around in wheelbarrows to buy a loaf of bread. And the result of all of that massive discontent was that Adolf Hitler and the Nazi Party won an election and took power. And you all know the results of that.

What many people do not know about Greece today is that the party that finished third in the Greek—recent Greek election is called Golden Dawn. This is a party which some people call a neo-Nazi party, but other people believe that it is nothing “neo” about it. It is a Nazi party, which came in third place in the recent election. In my view, we should learn from history. And we should understand that when democracy fails, when people vote for something and cannot get what the government promised because of outside forces, this leads to massive discontent, it leads to contempt for democracy, and it opens the path for right-wing extremist parties, like Golden Dawn.

Finally, let us remember that one of the main reasons why Greece was unable to take on so much debt was because it had help from Goldman Sachs, who helped disguise the nature of the Greek debt. Today, when we talk about debt, we should appreciate that something similar is happening right now in Puerto Rico, where the government there is struggling with unsustainable debt, and a group of hedge fund billionaires are demanding austerity in Puerto Rico. They are demanding the firing of teachers, the closing of schools, so that they can reap huge profits off the suffering and misery of the children and the people of Puerto Rico. It is time for creditors to sit down with the governments of Greece and Puerto Rico and work out a debt repayment plan that is fair to both sides. The people of Greece and the children of Puerto Rico deserve nothing less.

Over 70 years ago, the major economic leaders of 44 countries gathered at a hotel in Bretton Woods, New Hampshire, to establish international economic and financial rules. As a result of that conference, the International Monetary Fund and the World Bank were established. I think it is clear to anyone who has taken a look at this situation that the rules regarding our international financial system today are rigged in favor of the wealthy and the powerful at the expense of everyone else. Today, 85 of the wealthiest people in this world own more wealth than the bottom half of the world’s population, over 3 billion people. By next year, Oxfam has estimated that the top 1 percent of the world’s population will own more wealth than the bottom 99 percent of the world’s population. In my view, we have got to begin—and I hope this forum today is a start in that process—a serious discussion about how we change our international financial rules to expand—expand economic opportunity and reduce income and wealth inequality, not only in Greece and in Puerto Rico, but throughout the world. The global economy is simply unsustainable when so few have so much and so many have so little.

AMY GOODMAN: Democratic presidential candidate Senator Bernie Sanders speaking in July at a hearing he convened at the Hart Senate Office Building on the Greek debt crisis. On Thursday, Greek Prime Minister Alexis Tsipras announced his resignation, paving the way for new elections, in which Tsipras will run.

This is Democracy Now! When we come back, July is the hottest month on record. This year, so far, has been the hottest year in history. We’re going to talk about the links between climate change and the California drought. Stay with us. 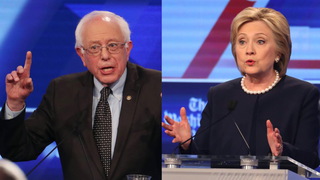