The White House has rejected a bailout package for Puerto Rico days after the U.S. territory failed to pay a small portion of the massive $72 billion it owes to bondholders. It was the biggest municipal bond default in U.S. history. Unlike U.S. states and municipalities, Puerto Rico cannot declare bankruptcy. Juan González discusses how the roots of the crisis are deeply tied to Puerto Rico’s colonial status.

JUAN GONZÁLEZ: Well, there was news again this week that Puerto Rico missed a bond payment, its first, $58 million in one of the bonds that it owes in the $72 billion debt load that it has. Of course, there was not much news that it did pay about $500 million in other bond payments that were due. But this is technically the first default in what is expected to be a string of defaults over the next several months, because the reality is, the island of Puerto Rico, the government, cannot pay the amount of debt it has. This year alone, Puerto Rico has to pay about $3 billion in debt service. That’s about 17 percent of its entire revenues of the government. Next year it’s going to go up to 20 percent of its entire revenues. If you were an individual and you had that much credit card debt, you couldn’t meet all your bills. If you were a corporation facing that amount of debt service, you would probably have to declare bankruptcy, a reorganization, then try to restructure your debts. But the problem is, Puerto Rico can’t do that. And it’s amazing to me how so many journalists are reporting this reality that unlike states in the United States, Puerto Rico does not have the ability to have its municipalities or its public corporations reorganize under bankruptcy protection, but no one questions why this is so. They just say it’s an anomaly.

And one of the points I tried to make in a column today, that this is part of a 117-year relationship of colonialism. This is part of the colonial status of Puerto Rico. Even the Marxist historian Richard Wolff this week claimed that Puerto Rico was a semi-colony. No, Puerto Rico is not a semi-colony; Puerto Rico is a colony of the United States. And I pointed to the decisions of the Supreme Court that ratified this colonial situation. It’s called—a bunch of decisions that were rendered in the early 1900s, called the Insular Cases, when Puerto Rico had just been acquired after the Spanish-American War. And in a five-four decision back then, the same five judges, by the way, that decided Plessy v. Ferguson, the separate but equal situation, that same five-judge conservative majority back at the turn of the century said in their decision—it was called Downes v. Bidwell—”the island of Puerto Rico is a territory appurtenant and belonging to the United States, but not part of the United States within the revenue clauses of the Constitution,” basically saying that the Constitution only applied in Puerto Rico those portions that Congress decided, deemed necessary to apply. So the problem for Puerto Rico has been for 117 years that all major decisions about the island are made by Congress, not by the elected officials of Puerto Rico themselves.

And you’ve had numerous examples. One example I gave—people forget—about the current crisis really originated with Bill Clinton. In 1996, Bill Clinton was attempting to get a new federal minimum wage passed. Newt Gingrich and the Republicans in Congress were resisting it, so Clinton cut a deal with the Republicans: Congress would raise the federal minimum wage but would provide billions of dollars in tax benefits to small businesses. Where would they get the money for that? Clinton agreed to do away with a special tax exemption that corporations in Puerto Rico had that was worth billions of dollars. And as a result of that—and it was to be phased in over 10 years, between 1996 and 2006. So over those 10 years, that special tax exemption was lost, taken away by Congress, and thousands of jobs left the island, as pharmaceutical companies, electrical—medical equipment companies, chemical firms decided it was no longer profitable for them, so they left the island. The best-paying jobs were lost. And Puerto Rico has been basically in economic contraction since 2000, for the last 10 years. So you have the reality of the decision that was made in Congress that began setting the basis for what’s happening in Puerto Rico now.

And so now, once again, Puerto Rico is having to go to Congress, asking for the right to reorganize, like General Motors did, like Detroit did, like Orange County did, to be able to reorganize under bankruptcy protection, and Congress is resisting. And President Obama, the White House, as you saw, is only paying lip service, is not really fighting over this issue. So, it remains to be seen how it will be resolved. But the reality is that the—all of this is rooted in the fact that Puerto Rico remains a colony of the United States, with no voting representation in Congress.

AMY GOODMAN: And how does the debt crisis face the—affect the people of Puerto Rico?

JUAN GONZÁLEZ: Well, it’s unbelievable. I mean, right now you have a situation where just a few weeks ago the government raised the sales tax from 7 percent to 11 percent. It has already effectively eliminated all the defined-benefit pension funds of government workers. Now, between the hedge funds and the economists, the IMF economists who are coming in, saying the only way to get out of this is by more austerity, they now want to eliminate protections from overtime. They want to—they want to encourage the island of Puerto Rico now to sell off all of its publicly owned—it’s already sold off its airport, privatized its airport, and some of its toll roads. Now they want it to sell the ports, to sell government buildings, to basically sell any government assets as a means to raise money. They want to reduce Medicaid. They want to lower the minimum wage. They want Congress to lower the minimum wage below that of the federal minimum wage. They want to create an even deeper cut in wages for young people. They basically want the population to bear the brunt of the economic problems of the island.

And I think that what the leaders of Puerto Rico are saying: “Hey, we’re in this together. All of these Wall Street firms kept pedaling loans to us.” Just last year, $3.5 billion in new bonds were issued, largely bought up by hedge funds, because Puerto Rico already had junk bond status for its debt, so it couldn’t raise money. So the hedge funds came in, and they said, “We’ll give you $3.5 billion in new loans; however, it comes at an 8 percent interest rate.” Now, understand, Puerto Rico is triple tax-exempt for anyone in the United States. That’s the great secret of how people—the finance community has made money off of Puerto Rico. That 8 percent is worth about 12 or 13 percent to—if it’s triple tax-exempt to anybody who invests in those bonds. So they’ve been making a killing, but they specifically said, “Not only do we get first priority—we’re the general obligation bonds. We get first priority for any payments of money that the government gets in. But if there’s a dispute, this dispute will not be heard in Puerto Rican courts, it will be held in New York courts.” So they were already preparing for the possibility that the island would default, but they wanted to have the courts on their side.

So you see that this—the hedge funds, especially, are demanding they’re first in line, they want payments. And the government of Puerto Rico is saying, “Look, if we’re going to suffer, if we’re going to make further cuts in Puerto Rico,” as they said in Greece, “the bondholders have to suffer, as well. They have to accept losses. They have to restructure the debts.” And that’s the problem, is that the Puerto Rico government can’t do that right now, given the reality of its colonial situation. So, we’ll see what happens in the coming months.

AMY GOODMAN: And we’ll link to your column at democracynow.org.

When we come back, you may have heard about the proliferation of presidential candidates. What about the crackdown on the people who get to vote for them or who they want to? It’s been 50 years since the Voting Rights Act was passed. Today we’ll speak with Ari Berman. He’s author of Give Us the Ballot: The Modern Struggle for Voting Rights in America. Stay with us.

Give Us the Ballot: The Struggle Continues 50 Years After Signing of the 1965 Voting Rights Act

NEXTGive Us the Ballot: The Struggle Continues 50 Years After Signing of the 1965 Voting Rights Act 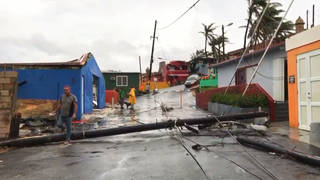