The pope’s visit has also drawn criticism over his position on women’s leadership within the church. Seven activists have been arrested in a civil disobedience in Washington, D.C., to call for Pope Francis to recognize the rights of women to be ordained. Among those arrested were four women priests who staged a die-in near St. Matthew’s Church. We speak to Janice Sevre-Duszynska, an ordained priest with the Association of Roman Catholic Women Priests.

AMY GOODMAN: Janice Sevre-Duszynska, you protested the pope yesterday in Washington. You were one of seven priests who got arrested. Explain your position and what you want to see happen. You are an ordained priest with the Association of Roman Catholic Women Priests.

JANICE SEVRE-DUSZYNSKA: Yes. We are calling for justice for women in the church and world, including women priests, and we’re asking Pope Francis to make the connections between poverty, violence and abuse of women in the world and our second-class status as women in the church.

NERMEEN SHAIKH: And could you explain what happened yesterday during the protest? Where were you, and how many people were involved in the protest?

JANICE SEVRE-DUSZYNSKA: There were seven of us, and—two male priests and three other women priests, beside myself, and one former Jesuit brother. We held our signs, “Women priests are here,” “Primacy of conscience.” Father Roy held the sign, “Pope Francis, ordain women priests.” And we eventually did a die-in, because we otherwise would have been forced to go on the street. And as we laid down, we held our signs across our bodies.

AMY GOODMAN: And talk about where the ordination of women stands in the Catholic Church.

JANICE SEVRE-DUSZYNSKA: Well, we’ve been told by a previous pope that it’s a closed issue. And we don’t accept that. It’s a very serious issue, because, you know, Jesus in the gospels is changing the paradigm of domination/subordination, and calling us into a circle of equals, calls us to friendship. And, you know, the whole idea of marginalizing women from the priesthood is sexism, and it’s a sin. And it causes so much—so much violence in the world not to have feminine images of God. In our liturgies, we use inclusive images of God, who is, of course, beyond gender. We also say that, you know, there’s so much femicide in the world, killing of women, rape of women, abuse of women within families, and also from warmongering, another domination/subordination pattern. And so we say that we need women imaging the imago dei with our own sacred feminine bodies at the table. And finally, we need the gospels interpreted from women’s living and dying, from our perspectives, to give a fullness to the world.

NERMEEN SHAIKH: And what has Pope Francis’s position been so far on the ordination of women in the Catholic Church?

JANICE SEVRE-DUSZYNSKA: Well, he has repeated, you know, this is—it’s a closed issue. Well, you know, we don’t accept that. And really, you know, we say to him, “Listen to your heart. We know you’re with us. Now we invite you to let it unfold.” He has to address this issue. I mean, he can’t—he would be contradicting all the good that he is saying about changing the other systems, of capitalism and warmongering. I mean, he told some of the weapons manufacturers in Milan not that long ago that he was going to excommunicate them, and he is against the harshness of capitalism—all which we support. And we support his critique of capitalism. And so, you know, this whole idea of rejecting women and us at the table as women priests, it does not fit in with the rest of his program.

AMY GOODMAN: Janice Sevre-Duszynska, we’re going to break and then come back to this discussion. Janice Sevre-Duszynska is a priest with the Association of Roman Catholic Women. She’s one of four women priests, seven overall, including Father Roy Bourgeois, who were arrested yesterday calling for the ordination of women. We’re also joined by Robert Ellsberg, who is the publisher of Orbis Books, a Catholic publication, as well as Martha Hennessy, who is a Catholic Worker—and we’ll talk more about that—a volunteer at the Maryhouse Catholic Worker in New York, and is the granddaughter of Dorothy Day, who is in the first phase of beatification, of the road to sainthood. This is Democracy Now! We’ll be back in a minute.

A Look at the Life of One of Pope’s “4 Great Americans”: Catholic Worker Founder Dorothy Day

NEXTA Look at the Life of One of Pope’s “4 Great Americans”: Catholic Worker Founder Dorothy Day 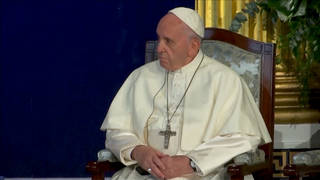