Last week saw a series of anti-choice protests surrounding the 43rd anniversary of Roe v. Wade. In Washington, D.C., protesters bearing photos of fetuses descended on the construction site for a new Planned Parenthood clinic. The protests forced the charter school next door to close for two days. A new project at the Sundance Film Festival puts you in the shoes of a woman passing through the gauntlet of anti-choice protesters to reach an abortion clinic. “Across the Line” is a seven-minute immersive virtual reality experience that uses real audio of anti-choice protesters. We speak with the project’s co-creator, Nonny de la Peña, known as the “godmother of virtual reality,” and with executive producer, Dawn Laguens, executive vice president of Planned Parenthood Federation of America.

AMY GOODMAN: We’re broadcasting from the Sundance Film Festival in Park City, Utah. Last week saw a series of anti-choice protests surrounding the 43rd anniversary of Roe v. Wade, the Supreme Court decision that assured women’s access to abortion all over the country in 1973. In Washington, D.C., protesters bearing photos of fetuses descended on the construction site for a new Planned Parenthood clinic. The protests forced the charter school next door to close for two days.

Well, we’re going to turn right now to a new project here at Sundance that puts you in the shoes of a woman passing through the gauntlet of anti-choice protesters to reach an abortion clinic. It’s called Across the Line. It’s a seven-minute immersive virtual reality experience that uses the real audio of anti-choice protesters. I spoke with the project’s co-creator, Nonny de la Peña, known as the “godmother of virtual reality”—she actually calls it immersive journalism—and with one of the executive producers, Dawn Laguens, the executive vice president of Planned Parenthood Federation of America. I started by asking Dawn to explain what Across the Line is.

DAWN LAGUENS: It is an opportunity for people to experience firsthand what women and men around the country go through, and providers, as they try sometimes to access healthcare at women’s health centers like Planned Parenthood. So in this virtual reality experience, you both get to observe someone as they are at a health center and some of their arrival there, but then you get to step actually into that person’s shoes and experience what it feels like to walk along a line of protesters and have them shout obscene and outrageous things at you while you just try and access reproductive healthcare.

AMY GOODMAN: Let’s go to a clip of Across the Line.

ANTI-CHOICE PROTESTER 2: Shame on you, that you would just walk in here with a smile, right into a murder clinic. Shame on you. God’s going to destroy you in a lake of fire, and you won’t be smiling then. You’re going to be weeping, wailing and gnashing your teeth. Shame on you, you wicked, pathetic woman! Wicked Jezebel feminist! Yeah, you shouldn’t have been a whore. You shouldn’t have been sleeping with every guy at the club, you wicked Jezebel!

AMY GOODMAN: Among the things screamed at a woman as she’s going into a clinic, “Wicked Jezebel feminist.” Talk about the reality of this virtual reality, Dawn.

DAWN LAGUENS: We really were wanting to show what really happens. So, in fact, we only went and taped actually what happened, the real audio of what people say. None of it is created or made up. So this is actually what women face as they walk into these health centers. And people are coming out of this experience, some of them in tears, many of them telling their own stories, many people saying, “I had no idea that that’s what happened. Like I knew people sometimes protested. I didn’t know that’s what it was like. And now I feel like I have to do something.”

NONNY DE LA PEÑA: So, immersive journalism is a concept I came up with a number of years ago to describe the use of virtual reality to put people on scene as real events transpire. Across the Line is an interesting piece because it does a mix of 360 video and the computer-generated material. And the reason we chose the way that we put the piece together, because in an interesting way it’s a montage of voices from across the nation, the type of things that are yelled at young women all around this country, rather than just showing one independent scene. So when you’re having to walk the line, walk the gauntlet, in this piece, you’re being screamed at in a way that women all around the country are screamed at. So, it’s a kind of interesting amalgamation of pieces.

AMY GOODMAN: So, I mean, when I did this this weekend in this virtual reality kind of box, I put on the goggles, and suddenly I’m in a clinic. And I can turn my head either way, and I’m seeing the whole room, the doctor talking to the patient, who’s extremely disturbed because of the gauntlet she had to go through to get in. And the second one is kind of sitting in the backseat of the car of these two women. The driver is holding the hand of the woman who’s going into the clinic. And you see why she was so upset when she got into the clinic room, with a man who has got his head thrust at her by the window, telling her not to go into this clinic, not to kill babies.

PATIENT: I’m just not sure which building it is.

PATIENT: I’m not sure which building it is.

ANTI-CHOICE PROTESTER 3: Please. Look, I know you’re struggling with something, all right? But I don’t want to see you get hurt.

AMY GOODMAN: And then you’ve got the last one, where I actually walk along and being led by one of the clinic volunteers to try to make my way through the gauntlet to get into the clinic. Describe that one, because there I’m actually walking.

NONNY DE LA PEÑA: Yeah. So the new virtual reality headsets allow you to actually walk around. And it’s very difficult to describe how impactful that experience is. You get a sense of, you know, being present in this world, in the same way that you would in your natural day. You know, it’s not 100 percent, but it’s certainly very evocative. You know you’re here, but you feel like you’re there, too. And because you feel like you’re there, because you personally have to walk the line, and everything you’re hearing came from real voices across the country, you experience it in a way that’s very personal and very visceral.

NONNY DE LA PEÑA: One of the designs of the pieces, it is predominantly white males who are yelling at young women. Right? It just is. And I don’t think that people understand how vitriolic the conversation is out there and how, you know—

AMY GOODMAN: Is that true, across the country—

AMY GOODMAN: —in these protests?

NONNY DE LA PEÑA: You do have women, but predominantly the people who are screaming are the white guys. And I have to say, the thing is that when you try to put people on scene, the idea is for them to kind of understand what’s happening. And if there’s a way to do that, perhaps we can make it into a much more civil conversation. It’s not about like, you know, who’s right or who’s wrong at this moment. You know, women do need to go into the health centers and get care. Right? This is—you know, low-income women are reliant on these centers, and it doesn’t seem appropriate that to go get healthcare, that you should experience that kind of vitriolic, angry, terrible stuff hurled at you. I mean, it’s awful. “You whore, you shouldn’t be sleeping with every guy at the club.” I mean, it’s pretty nasty. So, the point of the piece is to kind of go, well, is there—you know, is this—this is what’s happening, so it’s journalistically appropriate that way. This is what we’re seeing out there. But also, does it then lend itself toward some way for the conversation to become more civil?

AMY GOODMAN: That’s Nonny de la Peña. She is known as the “godmother of virtual reality”—she calls it immersive journalism—co-creator of Across the Line, as well as Dawn Laguens, executive vice president of Planned Parenthood, who, together with Caren Spruch and others, executive-produced Across the Line. This is Democracy Now!, democracynow.org, The War and Peace Report. We’re broadcasting from the Sundance Film Festival here in Park City, Utah. 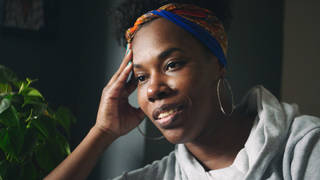