On Thursday, the U.S. Supreme Court affirmed the Fifth Circuit Court of Appeals in Fisher v. University of Texas and held that the University of Texas at Austin’s race-conscious admissions program is lawful under the Equal Protection Clause of the U.S. Constitution. “It is simply not true that we could eliminate the box and somehow act as if we are adequately evaluating students,” says Thomas Saenz, lawyer with the Mexican American Legal Defense and Education Fund, which filed an amicus brief on behalf of over 20 national Latino advocacy groups supporting the race-conscious admissions program. “The fact is that race and gender and national origin still matter,” he adds, because they shape one’s opportunities and experiences, and therefore one’s potential in higher education.

AMY GOODMAN: And, Thomas Saenz, we want to turn to another issue with you, another major Supreme Court decision. On Thursday, the Supreme Court affirmed the Fifth Circuit Court of Appeals in Fisher v. University of Texas and held the University of Texas at Austin’s race-conscious admissions program is lawful under the Equal Protection Clause of the U.S. Constitution. Late last year, Thomas Saenz, your organization, MALDEF, filed an amicus brief on behalf of 20 national Latino advocacy groups supporting the affirmative action program. I want to get your response to the Supreme Court ruling. But first, let’s to turn to the petitioner in the case, Abigail Fisher, who says she was rejected by the UT because she’s white. In this online video, she billed her lawsuit against affirmative action as a challenge to discrimination.

ABIGAIL FISHER: There were people in my class with lower grades, who weren’t in all the activities I was in, who were being accepted into UT, and the only other difference between us was the color of our skin. … A good start to stopping discrimination would be getting rid of the boxes on applications—male, female, race, whatever. Those don’t tell the admissions people what type of student you are or how involved you are. All they do is put you into a box. Get rid of the box.

THOMAS SAENZ: Well, it was a great victory in the Supreme Court in Fisher yesterday. It does ensure that, across the country, universities can continue to use affirmative action in admissions, which is a necessary element of providing equal educational opportunity in this country. It’s simply not true that we could eliminate the box and somehow act as though we are adequately evaluating students. The fact is that race and gender and national origin still matter in this country. It shapes how students who are preparing for college are allowed to prepare. It shapes their opportunities. It shapes their experiences. And preventing universities from considering such an important element of a student’s experiences, and therefore their potential for success in higher education, is simply foolish, not just as a matter of equal educational opportunity, but as a matter of ensuring that our universities are admitting those students with the greatest potential to succeed.

JUAN GONZÁLEZ: But now, how—how broad is this decision? Because some people have argued that it was specifically tailored to the unique admissions program that exists at the University of Texas, in the state of Texas, and might not necessarily be broad enough to cover admissions policies at other universities.

THOMAS SAENZ: Well, this is the second time that the Fisher case has gone to the Supreme Court. A few years ago, the court agreed that the university could have an affirmative action, a race-conscious affirmative action program, if it was pursuing the interest of diversity. So that was a first step. This was a more detailed application of the test to the specific UT-Austin program. But nonetheless, the victory yesterday is an indication to universities around the country that they can continue to pursue these programs, so long as they do so consistent with the restrictions placed on them by the Supreme Court. So it was a victory that extends beyond the University of Texas at Austin to all universities that are considering race as one limited element of decision-making when it comes to admissions.

AMY GOODMAN: We want to thank you very much for joining us, Thomas Saenz, president of MALDEF, the Mexican American Legal Defense and Education Fund.

This is Democracy Now! When we come back, we head east to Baltimore, Maryland, to another police officer acquitted in the death of Freddie Gray. Stay with us. 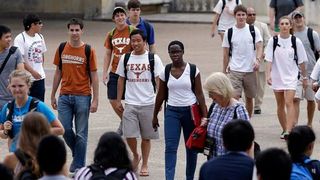