John Nichols: The GOP is More United in Disdain for Hillary Clinton Than in Support for Donald Trump

It’s now official: Donald Trump has become the presidential nominee of the Republican Party. The announcement was made by House Speaker Paul Ryan after a roll call vote at the convention here in Cleveland. He received the formal nomination only one day after delegates from the “Never Trump” movement briefly staged a revolt against Trump on Monday. The rebellion threw the first day of the convention into chaos, but the effort was quashed by party leadership. Some dissenting delegates booed during Tuesday’s roll call vote. We speak to The Nation’s John Nichols, author of the new piece, “Trump Is Officially the GOP Nominee—but Republicans Aren’t Exactly Celebrating.”

AMY GOODMAN: This is Democracy Now!, democracynow.org, “Breaking with Convention: War, Peace and the Presidency.” I’m Amy Goodman. We’re broadcasting from Cleveland, Ohio, where the Republican National Convention is taking place. We’re covering it inside and out, from the streets to the convention floor.

Yes, it’s now official: Donald Trump has become the presidential nominee of the Republican Party. The announcement was made by House Speaker Paul Ryan after a roll call vote at the convention here in Cleveland.

SPEAKER PAUL RYAN: The chair is prepared to announce the results. The following candidates received the following votes: 1,725, Trump; 475, Cruz; 120, Kasich; 114, Rubio; seven, Carson; three, Bush; two, Paul. Accordingly, the chair announces that Donald J. Trump, having received a majority of these votes entitled to be cast at the convention, has been selected as the Republican Party nominee for president of the United States.

AMY GOODMAN: Donald Trump is expected to officially accept the nomination Thursday night, but he briefly spoke to delegates via satellite from Trump Tower.

AMY GOODMAN: In one of the most animated moments on Tuesday, delegates repeatedly broke into chants of “Lock her up!” during a speech by New Jersey Governor Chris Christie, when he staged a mock trial of Hillary Clinton.

GOV. CHRIS CHRISTIE: Libya today, after Hillary Clinton’s grand strategy, their economy is in ruins, there’s death and violence on the streets, and ISIS is now dominating that country. So I’m going to ask you this. Hillary Clinton, as a failure for ruining Libya and creating a nest for terrorist activity by ISIS, answer me now: Is she guilty or not guilty?

AMY GOODMAN: The audience was chanting “Lock her up! Lock her up!” and “Guilty!” many putting their hands up across as if to say she should be handcuffed. Another speaker Tuesday night, former presidential candidate Dr. Ben Carson, went as far as connecting Hillary Clinton to Lucifer.

Earlier in the day, Politico ran a stunning article about fears within the Republican establishment about the future of the party. They reveal former President George W. Bush recently told aides, quote, “I’m worried I will be the last Republican president,” unquote. And the convention is occurring as one of the most powerful figures in the conservative movement, Roger Ailes, may soon be forced out as chair and CEO of Fox News following a sexual harassment lawsuit.

Joining us now here in Cleveland is John Nichols, political writer for The Nation. His most recent piece is headlined “Trump Is Officially the GOP Nominee—but Republicans Aren’t Exactly Celebrating.” John Nichols is also co-author of the new book People Get Ready: The Fight Against a Jobless Economy and Citizenless Democracy.

Welcome back to Democracy Now!, John. So, you were on the floor. I saw you over there—

AMY GOODMAN: —over at the Quicken Loans Arena. Thousands of both Trump supporters and simply Republican delegates—not always the same—were there. Talk about your impression of last night, this historic moment, however you feel.

JOHN NICHOLS: Well, I have to tell you that you and I’ve both been to a lot of conventions, and I wouldn’t necessarily say that this was completely atypical, but it was very, very different in some fundamental ways. When the roll call was going on, there was still an incredible tension on the floor. I was out in an alley with the Utah and Alaska delegates, and they went to the microphone, in that classic sense, and announced their votes for Ted Cruz. And then Paul Ryan, standing up on the stage, and the other folks up there announced that they had voted for Donald Trump. Now, this created this bizarre setting where, finally, Alaska objected. And they then—the convention stalled out. The band played “Shake Your Booty.” Republicans danced. Republican aides came out to the Alaska delegation, counted them again, did this whole process. And then, suddenly, Reince Priebus, the chairman of the Republican National Committee, comes to the stage and said, “Well, those are the rules. Your votes are for Trump. And have a nice day.” It was a bizarre sort of ritualized nomination without the sort of joy and festivity and positiveness of it.

And when Trump was finally announced as the nominee, there was, you know, about a minute or so, and then they went straight into the anti-Hillary Clinton speeches. The bottom line is this: It’s quite clear now that this party is not really uniting around Donald Trump; they are uniting in their absolute disdain for Hillary Clinton. And also, I would suggest a deep underpinning that I don’t think is being reported enough in a lot of media, they are uniting around a very theocratic vision of the United States. The platform that was approved actually outlines concepts for having states order school districts to develop Bible study programs or elective courses in Bible study. The People for the American Way’s Right Wing Watch said that—after the 2012 convention, they said, you know, this was about as extreme as you could possibly get. But they’ve had to readjust, because this platform is dramatically more extreme on social issues than the Republican Party has ever been. And so, that’s really what you have here. You have the Trump overlay, much covered by the media, but beneath it, a lot of dissension, a lot of actual anger, as well as this very theocratic party line. And what’s wrapping it all up is a bitterness, this anti-Clinton thing. Now, you can like Hillary Clinton or dislike Hillary Clinton, but I think Jeff Flake, the senator from Arizona, did sum it up pretty well. You could run a campaign against Clinton on the issues. That’s not what this is. This is just visceral disdain.

JOHN NICHOLS: It was a speech that Chris Christie would have liked to have given as the vice-presidential nominee, but he was passed over for Mike Pence, who will give a much milder speech. But Christie is clearly all in. It is his desire to be Donald Trump’s, you know, number one attack dog, the guy who goes out and hits hardest.

GOV. MIKE PENCE: People who know me well know I’m a pretty basic guy. I’m a Christian, a conservative and a Republican, in that order. Now, while I’m currently—I currently have the privilege of serving the state that I love, I’m really—I’m really just a small-town boy who grew up in southern Indiana with a big family and a cornfield in the backyard.

AMY GOODMAN: So, that’s Mike Pence. “I’m a Christian, I’m a conservative, I’m a Republican, in that order.”

JOHN NICHOLS: And that’s why he’s the nominee. Donald Trump had a real challenge. It’s not, again, covered well, because most of our media does not cover this complex interplay between the religious right and the Republican Party in a serious way.

AMY GOODMAN: And certainly, people who know Donald Trump, the developer, don’t think of him as a man of God.

JOHN NICHOLS: No, it—I don’t think that’s, you know, first tier, although you can discuss “Two Corinthians” with him, or whatever. But the bottom line is that he needed this. If you go on the floor of that convention, you know he needed Pence. And what Pence brings to him is absolute allegiance with the religious right. He came up politically that way. But he also brings something else that is perhaps worthy of at least as much discussion, and that is a long-term relationship with the structural supporters of the modern conservative movement in this country. He has worked for groups that have been funded by some of the richest people in the country, groups associated with the Koch brothers, for many, many years. He speaks their language. He is a down-the-line social, economic and foreign policy conservative who fits the mood of this new conservative establishment. So, Trump picked him not for the message that goes out. Chris Christie could throw the messages that go, you know, beyond the convention. Pence was picked for this convention and for the inside of the modern Republican Party, which is not a party, by the way, that particularly likes Donald Trump.

The Fall of Roger Ailes: Can Sexual Harassment Claims Oust the Biggest Man in Conservative Media? 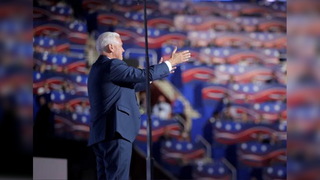