As Indiana Governor Mike Pence accepts the Republican nomination for vice president, we look at how the religious right will respond to the man who was their “dream candidate” in 2012. “In one fell swoop, he strengthens his connections to religious right leaders and to the Koch brothers’ network,” says our guest Peter Montgomery, senior fellow at People for the American Way.

AMY GOODMAN: This is Democracy Now!, democracynow.org. This is “Breaking with Convention: War, Peace and the Presidency.” We’re in Cleveland, Ohio, covering the Republican National Convention inside and out, from the streets to the corporate suites to the convention floor. I’m Amy Goodman. On Wednesday night, Indiana Governor Mike Pence accepted the Republican nomination for vice president.

GOV. MIKE PENCE: As this election approaches, every American should know that while we’re filling the presidency for the next four years, this election will define the Supreme Court for the next 40. We all better think very carefully, very carefully, about what this means for our Constitution and limited government. Elect Hillary Clinton, and you better get used to being subject to unelected judges using unaccountable power to take unconstitutional actions. Though let me say, for the sake of rule of law, for the sake of the sanctity of life, for the sake of our Second Amendment, and for the sake of all our other God-given liberties, we must ensure that the next president appointing justices to the Supreme Court is Donald Trump.

AMY GOODMAN: But Governor Pence’s speech Wednesday night was largely overshadowed by Texas Senator Ted Cruz, who refused to endorse Donald Trump in a stunning 21-minute prime-time address that was greeted by boos from Trump supporters.

SEN. TED CRUZ: If you love our country and love your children as much as I know that you do, stand and speak and vote your conscience. Vote for candidates up and down the ticket who you trust to defend our freedom and to be faithful to the Constitution.

AMY GOODMAN: To talk more about the Republican National Convention, we’re joined now by Peter Montgomery, senior fellow at People for the American Way. His recent piece is headlined “How Would Religious Right Respond to Pence as VP?”

Peter Montgomery, welcome to Democracy Now! So, how are they responding?

PETER MONTGOMERY: Most of them are responding very strongly. They—he’s been a longtime champion of their issues, and, for the most part, they’re very happy with him. When he was a member of Congress before he decided to run for the governorship, he was really seen as their dream candidate in 2012, and he won the straw poll at the religious right Values Voters Summit. And one of the religious broadcasters was comparing him to Madonna. So, they’ve had some disputes with him since he became governor, but, for the most part, they’re pretty happy with him.

AMY GOODMAN: Talk about Donald Trump’s selection of Pence as his running mate. Now, we have learned, since his selection, that he actually had chosen John Kasich, the governor here of Ohio, who hasn’t shown up for this convention, though he was at the Rock and Roll Hall of Fame down the street in Cleveland. Now, the Trump campaign is denying this, but it’s been very—it’s been reported in detail that Donald Trump Jr. approached the Trump campaign—approached Kasich and said that he would be in charge of both domestic and foreign policy. And The New York Times reports that Kasich directly spoke to Donald Trump and said no, that he would not accept this. So, it’s Donald—so it is Governor Pence. Talk about why you think Donald Trump chose him?

PETER MONTGOMERY: Well, I think he probably chose Mike Pence because Mike Pence is close to both the Koch brothers’ political network and to the religious right. And those are two hugely important parts of the Republican infrastructure that have not been uniformly excited about Trump. And some of them have been very concerned about him. So, in one fell swoop, he strengthens his connections to religious right leaders and to the Koch brothers’ network. And he gets someone who comes across as a stable person, when people are concerned about his—you know, of Trump’s temperament.

AMY GOODMAN: Talk about the event you attended on Tuesday night, the American Conservative Union Federation.

PETER MONTGOMERY: —asking whether people would be—whether conservatives will be supporting Trump. And Pence showed up as a surprise keynoter, telling conservatives that the primaries were over, it’s time to get in line and support him, and also trying to convince [them] that Trump is a good man. He used that phrase multiple times in his short speech to them. “This good man” was something that he was really trying to convince the conservatives there about.

AMY GOODMAN: Explain Governor Pence’s involvement with what’s called the Religious Freedom Restoration Act, seen as a fiercely anti-LGBTQ law, that he signed off on and then was forced to, quote, “clarify.”

PETER MONTGOMERY: Right. This was a law that he—was passed and he signed last spring. It’s an effort by religious right groups around the country to pass these state laws that would really give special legal protection to anti-LGBT discrimination, would allow business owners and others to claim a religious exemption from nondiscrimination laws. And he signed it with a lot of religious leaders around him, and they were very happy. But there was huge backlash, led by the business community, that I think really stunned Pence. And he was forced to sign an amendment to that law that said it can’t be used to discriminate. And many of his religious right allies saw that as a huge betrayal. He was caught between his allies in the business community and his allies in the religious right. And so, some people, like Tony Perkins at the Family Research Council, are still a little bitter about that. He said the other day, when talking about Trump’s choice of Pence, that he gives Trump credit for trying and wanting to reach out, but he’s still not too happy with Pence on that.

AMY GOODMAN: He got tremendous both corporate backlash, everyone from Angie’s List to Apple, to the athletic leagues like the NCAA, all saying that they would leave Indiana, they would boycott Indiana.

PETER MONTGOMERY: And I think he was absolutely unprepared for that. I think, you know, his—the circles that he travels in, the culture that he—you know, he’s been part of these anti-gay circles for so long, I think he didn’t realize how much the business community has moved, the way the public has moved on LGBT issues. And I think he really was not prepared for that kind of business backlash to supporting pro-discrimination legislation.

AMY GOODMAN: You’ve been tracking hate speech here at the RNC. Peter Montgomery, talk about it.

PETER MONTGOMERY: Well, you know, I think that there has been a tremendous amount of rhetoric on the floor that’s been disturbing to people, misogynist, you know, the way people have been referring to Hillary Clinton. There have been a lot of attacks, both on the floor and at some of the right-wing gatherings that have been taking place—attacks on the Black Lives Matter activists, attacks on immigration. It’s really been a disturbing show.

AMY GOODMAN: And the Gays for Trump party that you attended last night?

PETER MONTGOMERY: That was one of the stranger things I think I have experienced. It was organized by a group called Gays for Trump, and the focus of it was to highlight some very hardcore, extreme anti-Islam activists who, while they were talking about freedom for gay people, they were talking about de-Islamizing Western societies and, you know, banning Muslims from entering based on their religion. And all that was happening in this context of Twinks 4 Trump posters on the wall, of young men posing with “Make America Great” hats again and guns. It was a very, very odd event. But it was disturbing to me, as a progressive gay man, to be in this event where gay people and their supporters were chanting support for this kind of incredibly divisive and discriminatory rhetoric about Muslims.

AMY GOODMAN: Well, we’re going to talk about that, have a debate in our next segment. Peter Montgomery, senior fellow at People for the American Way, we’ll link to your piece. It is headlined “How Would Religious Right Respond to Pence as VP?” He’s been covering the RNC all week. This is Democracy Now! Stay with us.

Make America Straight Again? A Debate on What Could Be the Most Anti-LGBT Republican Platform Ever

NEXTMake America Straight Again? A Debate on What Could Be the Most Anti-LGBT Republican Platform Ever 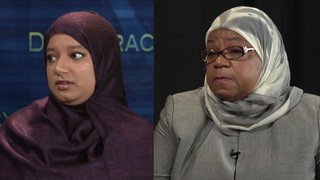