We get reaction to the State Department’s statement that a plane filled with $400 million in cash for Iran was “leverage” to ensure that five American prisoners held by Iran were released. Republicans, including Donald Trump, have said the money sent in January was a ransom for the prisoners. The Obama administration says it was a pre-planned transfer that was part of the landmark nuclear deal and that the negotiations regarding the two issues were separate. We speak with Shane Bauer, a Mother Jones reporter who spent 26 months in Tehran’s Evin Prison, four of them in solitary, after he and two other Americans, Sarah Shourd and Joshua Fattal, were captured while hiking near the unmarked Iran-Iraq border and then freed after negotiations.

StoryMar 18, 2014A Sliver of Light: Freed U.S. Hikers on Captivity in Iran & Activism Against Solitary Confinement

AMY GOODMAN: But, Shane Bauer, we want to stay with you for one more moment, but on a different issue. I want to ask you about the recent developments in Iran. In addition to your recent reports for Mother Jones, in 2009, you spent more than two years in Tehran’s Evin Prison, four [months] of them in solitary, after you and two other Americans—now your wife, Sarah Shourd, and Josh Fattal—were captured while hiking near the unmarked Iran-Iraq border. You recount this in your book, A Sliver of Light: Three Americans Imprisoned in Iran. This is a clip of you speaking shortly after your release.

SHANE BAUER: The only explanation for our prolonged detention is the 32 years of mutual hostility between America and Iran. We were convicted of espionage because we are American. It’s that simple. No evidence was ever presented against us. That is because there is no evidence and because we are completely innocent.

JOSH FATTAL: Many times, too many times, we heard the screams of other prisoners being beaten, and there was nothing we could do to help them. Solitary confinement was the worst experience of all of our lives. It was a nightmare that Sarah had to endure for 14 months. In all the time we spent in detention, we had a total of 15 minutes of telephone calls with our families and one short visit from our mother—our mothers. We had to go on hunger strike repeatedly just to receive letters from our loved ones.

AMY GOODMAN: Well, this week, the State Department said a plane filled with $400 million in cash for Iran was “leverage” to ensure that five other American prisoners held by Iran were released. Republicans, including Donald Trump, have said the money was ransom for the prisoners. The money was sent to Iran in January. The Obama administration has said the money was a pre-planned transfer that was part of the landmark nuclear deal, and that the negotiations regarding the two issues were separate. But State Department spokesman John Kirby admitted the negotiations had been linked, to some extent.

JOHN KIRBY: We were able to conclude multiple strands of diplomacy within a 24-hour period, including implementation of the nuclear deal, the prisoner talks and the settlement of an outstanding Hague tribunal claim, which saved American taxpayers potentially billions of dollars. As we said at the time, we deliberately leveraged that moment to finalize these outstanding issues nearly simultaneously.

AMY GOODMAN: That $400 million had been owed to Iran since the 1970s, when the U.S. refused to send weapons Iran had already paid for following the Iranian revolution. Now, Shane, we’re wondering your response to this news and the latest controversy over whether this money was actually ransom, given your situation and how you ultimately got out of Iran.

SHANE BAUER: I think the claim that this money was a ransom is absurd. Like you said, this money had been owed to Iran since the time of the overthrow of the shah. You know, this was a pre-existing negotiation, and pegging—using this as leverage to get Iran to release the prisoners is exactly what should have been done. You know, I could easily see criticism from the opposite direction from Republicans, saying, you know, “What if the Obama administration had not done this, and left these prisoners sitting in there and not included them in negotiations?” I mean, that would be way more ridiculous.

AMY GOODMAN: Actually—actually, that was Donald Trump’s criticism of the Iran deal. Early on, when the Iran deal was struck, he said this is pathetic, if, included in this, the prisoners do not get released.

SHANE BAUER: Exactly. I mean, these criticisms are ridiculous, in my opinion. And I think, you know, when I had been in prison, there had not been, as far as I know, much in terms of negotiations between the U.S. and Iran. And the fact that the administration moved towards this and including these prisoners in those negotiations is exactly the right thing to do.

AMY GOODMAN: How, ultimately, did you get out, Shane?

SHANE BAUER: I had been released, as well as Sarah and Josh, through negotiations with Oman. Oman had actually initiated these negotiations themselves. They were interested in easing tensions between the U.S. and Iran, and in ultimately moving towards a nuclear deal. They made trips to Iran and to D.C., and kind of went back and forth bringing offers from each side. And after our release, that avenue, that had been created through our situation, was the way that the U.S. and Iran began nuclear talks, before they were publicly negotiating.

AMY GOODMAN: Well, Shane, thanks so much for being with us, Shane Bauer, award-winning senior reporter at Mother Jones. His recent piece is about his undercover investigation of private prisons, called “This Prisoner Hanged Himself at the Private Prison Where I Worked. His Family Says He Didn’t Have to Die.” It’s part of this amazing series he did, “My Four Months as a Private Prison Guard,” which chronicles his time undercover as a correction officer in Louisiana’s Winn Correctional Center. But Shane also wrote the book, together with Sarah and Josh, called A Sliver of Light: Three Americans Imprisoned in Iran.

When we come back, we’ll talk about the Olympics, the controversy there and some of the records that have been broken. Shane, thanks so much for being with us. Stay with us. 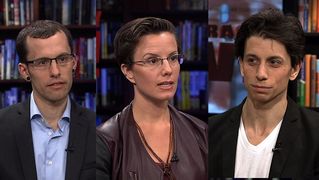 A Sliver of Light: Freed U.S. Hikers on Captivity in Iran & Activism Against Solitary Confinement