Ahead of the final weekend of the Olympics in Rio de Janeiro, Brazilian police have accused a group of U.S. Olympic swimmers of vandalism during an incident at a gas station last weekend and say they are now considering whether to recommend charges against them, including gold medalists Ryan Lochte and Jimmy Feigen. The swimmers said they were robbed by gunmen impersonating police officers in the early hours of Sunday as they returned in a taxi to the Athletes Village from a party in the city. However, after an investigation, Rio police said there had been no robbery. U.S. Olympic authorities later apologized to Brazil after two U.S. swimmers who were kept in the country for questioning were allowed to go home. We are joined by Dave Zirin, sports editor for The Nation magazine, whose recent article is headlined “Ryan Lochte is One of Many Privileged First-World Tourists—and Brazilians are Fed Up.”

StoryAug 29, 2016Greenwald: The Olympics May Be Over, But the Anger, Disillusionment Among Brazilians Remains High

JUAN GONZÁLEZ: We turn now to the Olympics, which are heading into the final weekend in Rio de Janeiro. Brazilian police have accused a group of U.S. Olympic swimmers of vandalism during an incident at a gas station last weekend and say they are now considering whether to recommend charges against them, including gold medalists Ryan Lochte and Jimmy Feigen. The swimmers said they were robbed by gunmen impersonating police officers in the early hours of Sunday as they returned in a taxi to the Athletes Village from a party in the city. However, after an investigation, Rio police said there had been no robbery. This is the head of Rio de Janeiro’s civil police, Fernando Veloso.

FERNANDO VELOSO: [translated] At this exact moment, what the police can say is there was no robbery the way the athletes reported. They were not victims of the criminal facts that they described. The police can say that now. In theory, they can be charged with giving false testimony and vandalism—in theory. They stopped at the gas station. They went to the toilets, as the images showed. And one or more than one—we are still investigating that—started vandalizing inside the toilets of the gas station.

JUAN GONZÁLEZ: U.S. Olympic authorities later apologized to Brazil after two U.S. swimmers who were kept in the country for questioning were allowed to go home. U.S. Olympic Committee CEO Scott Blackmun said in a statement, quote, “We apologize to our hosts in Rio and the people of Brazil for this distracting ordeal in the midst of what should rightly be a celebration of excellence.”

The incident was just one in an Olympic Games plagued by everything from green pools to empty seats. Brazil is also battling an economic recession, a massive Zika outbreak and the recent ouster of its democratically elected president, Dilma Rouseff. Human rights organizations have also expressed concern about the impact of the Games on Rio’s most vulnerable communities.

AMY GOODMAN: But the Olympics were not without success stories. Thursday night, Jamaica’s Usain Bolt dominated the men’s 200 meters final, clinching his eighth Olympic gold medal. Brianna Rollins led the American women in sweeping the 100-meter hurdles Wednesday. And the so-called Final Five women’s gymnastics team, the most diverse team ever to represent the U.S., concluded their run in Rio with an historic nine medals.

To talk more about the Rio Olympics, we’re joined by Dave Zirin. He’s back in Washington; he was just in Rio. He writes for The Nation magazine. His recent article, “Ryan Lochte is One of Many Privileged First-World Tourists—and Brazilians are Fed Up.” He also is the author of Brazil’s Dance with the Devil: The World Cup, the Olympics, and the Fight for Democracy.

Dave, talk about the Lochte scandal.

DAVE ZIRIN: No, absolutely. And we do have breaking news on this, in addition to what you’ve already reported. Jimmy Feigen, one of the two swimmers along with Lochte who was probably going to be charged for making false statements to the police and vandalism, has been released. He’s on his way home. In return, he had to give an $11,000 charitable donation to a foundation called Reaction, that attempts to use judo and sports as a way to bring favela kids into the mainstream of Rio. It’s the place that Rafaela Silva, the Brazilian judoka from the City of God favela, that’s where she trained, as well. And that might sound small to some folks, but in a city where the business leaders, the construction leaders and the real estate leaders want a Rio without favelas, and have built these exclusion games, where the favelas are under occupation, any monetary ability to give anything helps. So Jimmy Feigen is on his way back to the United States. As for Ryan Lochte, he could still be indicted in absentia for making false statements and vandalism. But at the same time, it would be for a misdemeanor, and it’s not the sort of thing that would require any sort of extradition. So, the criminal part of this is largely done.

But I got to tell you, having just returned from Rio, the anger about this is not going anywhere, because Ryan Lochte has done the impossible: He’s managed to unite people in Rio who are both against the Olympics and people who are for the Olympics, because it’s very paradoxical down there, because, on the one hand, you know, I spoke to teachers, I spoke to people who depend on Brazil’s ramshackle medical system, and people are, of course, furious about the fact that billions of dollars are being spent to put on these Games at a time when there is so much economic and social upheaval in the country, when the country is mired in its worst recession in decades. But paradoxically, there is a lot of pride in the fact that people are kind of holding this together, that volunteers, that low-wage workers are somehow keeping this together and holding the kinds of Games that can have the kinds of events, Amy, that you described, that can create these kinds of moments.

And to have Ryan Lochte and friends literally and figuratively urinate all over their efforts, and also be the kind of stereotype of the ugly American who believes there is no sin below the equator, who exploits people’s biggest stereotypes about Rio and crime, and attempts to leverage the fact that they’re wealthy and white and Olympians and could somehow just blame it on the brown people, get on a plane and go home, what it manages to do is touch every nerve in Brazilian society right now and create a kind of bizarre unity of Brazilians, who are saying, “Wait a minute, we deserve a lot better than this for the effort that we have put in to staging these Games under unendurable circumstances.”

JUAN GONZÁLEZ: And, Dave, I wanted to follow up on that, because obviously this scandal had two periods. There was the early narrative, that was reinforcing, well, Rio is a place of criminality, the athletes aren’t safe, for the first couple of days, until the actual story came out, and now there’s been a reversal. It reminded me very much of—people may have forgotten—more than, I guess, 30 years ago now—

JUAN GONZÁLEZ: —when Bobby Knight was down in Puerto Rico with the U.S. team in the Pan American Games, and he ends up getting arrested because he assaulted a police officer there, and then gets—and then flees the country and becomes, really, a pariah in Latin America as a result.

DAVE ZIRIN: Yeah, Bobby Knight, a Trump supporter. Bobby Knight, oh, so, yeah, he assaulted a Puerto Rican police officer. And then, as he said later, he proudly mooned the entire country as the plane was taking off. It’s that kind of ugly American stereotype that helps nobody. And fulfilling that stereotype certainly helps nobody.

And I’ll you who it’s also really upset, is that, you know, when I was down in Rio, I met a ton of people from the United States who were trying to do the right kind of work. They’re trying to do favela support. They’re trying to help train people with independent media, organizations like Catalytic Communities. When you have an American behave like this, behave with this kind of unfettered privilege, what it does is it affects everybody who’s actually trying to do the right work and build solidarity. And that’s why this is more than just like this kind of small story of Americans behaving badly. I’m sure that’s what Ryan Lochte thinks it is. His comments on this have all reflected a kind of brain-deadness about the international incident aspect of this.

JUAN GONZÁLEZ: And what about that, Dave? How has Rio managed to pull off these Games? Now we’re heading into the last weekend. We only have about 30 seconds.

DAVE ZIRIN: They’ve been able to pull off the Games through—basically, through Scotch tape, hard work and unpaid labor. A report was out today that the day laborers working in the Olympic Village make only $15 a day, yet IOC officials get per diems—that’s spending money—of $900 a day. So people are doing it only out of a sense of national pride at this point. And to have their efforts just absolutely slapped around by Ryan Lochte and friends as if they’re somehow less than human, believe me, that really touches the third rail of Brazilian identity.

AMY GOODMAN: Dave, stay with us, because we want to continue this conversation. We’ll post it online at democracynow.org. Watch Part 2: http://www.democracynow.org/2016/8/19/back_from_rio_dave_zirin_on

That does it for our show. I’ll be speaking in Seattle at the American Sociological Association tonight at the Sheraton at 7:00. 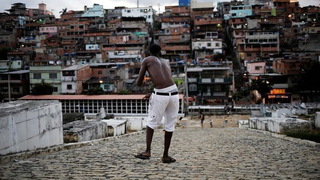