The Olympics have wrapped up in Rio, leaving Brazilians with a massive debt from the Games and an ongoing financial crisis. For more on the current situation, we speak with Glenn Greenwald, Pulitzer Prize-winning journalist and co-founder of The Intercept. He has recently helped launch a new Intercept bureau in Brazil.

AMY GOODMAN: This is Democracy Now!, democracynow.org, The War and Peace Report. I’m Amy Goodman. We’re speaking with Glenn Greenwald, Pulitzer Prize-winning journalist, one of the founding editors of The Intercept, recently helped launch The Intercept Brasil in Portuguese to cover Brazilian social and political news. Why, Glenn?

GLENN GREENWALD: So, as I indicated earlier, Brazil, one of their principal problems is that they have a dominant media that is incredibly homogeneous. It’s owned by three or four billionaire families, who are very close to the government, who have very similar political views. They’ve been condemned by Reporters Without Borders as a threat to democracy. And when we started doing reporting on the impeachment process and the political crisis eight or 10 months ago at The Intercept, the reason was to fill that gap.

And the response was extraordinary. The number of people reading the articles we were writing was very large, and that’s because there’s a hunger for independent and adversarial journalism. It exists in Brazil. There’s a lot of good independent bloggers, but they don’t have the institutional resources that we were able to bring. And so we decided, going forward, to continue doing that kind of journalism. We created a team of about 10 to 12 Brazilian journalists and editors and columnists, and we hope to continue to expand the coverage. And the idea is to shine a light on the perspectives and stories and voices that are typically ignored by Brazil’s dominant media.

AMY GOODMAN: Glenn, can you talk about the aftermath of the Rio Olympics, everything from the Lochte scandal to the protests around the Olympics that so few people got to see, though there was massive coverage, of course, of the Games?

GLENN GREENWALD: Yeah, it really remains to be seen what the fallout will be. Obviously, there have been some infrastructure improvements in Rio as a result of the Olympics. There are subway lines that have been built that didn’t previously exist. But by and large, most of the money was spent to improve the areas and neighborhoods where upper-middle-class to the wealthiest people of the city live and will be able to use, and the nation’s—the city’s poorest residents were essentially ignored, not entirely, but overwhelmingly. There was—there’s a massive crime problem in Brazil, and especially in Rio, that was sort of kept under control during the Olympics. But now that the tens of thousands of military troops occupying the city are mostly gone, the question is, what will happen with that?

And most of the residents of the city, who live without even minimal services, watched billions and billions of dollars being spent on stadiums that won’t be used and buildings that will now be sold at great profit, while their minimal, meager social programs will now be cut by a government that was never elected. And so there’s a lot of anger and a lot of disillusionment and a lot of resentment about what the aftermath of the Olympics will likely entail for the people who are in the greatest need.

AMY GOODMAN: Glenn, I want to thank you for being with us. I want to ask you to stay for just five minutes after the show; we’ll do a post-show and post it online at democracynow.org. Glenn Greenwald is the Pulitzer Prize-winning journalist, one of the founding editors of The Intercept, recently helped launch The Intercept Brasil in Portuguese to cover Brazilian social and political news.

As Bernie Sanders Condemns 'Coup' in Brazil, Why Have Obama & Clinton Been So Silent?

Greenwald: 'Why Did Saudi Regime & Other Gulf Tyrannies Donate Millions to Clinton Foundation?'

Greenwald: Journalists Should Not Stop Scrutinizing Clinton Just Because Trump is Unfit for Office 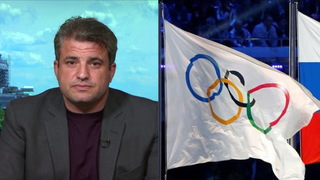