Medea Benjamin: If Americans Can Sue Saudis over 9/11, Drone Victims Should Be Able to Sue U.S.

“Finally, we have an example of the U.S. Congress putting U.S. citizens above the relationship with the Saudi government,” says CodePink’s Medea Benjamin in response to the vote by Congress to allow Americans to sue Saudi Arabia over the 9/11 attacks, overriding President Obama’s veto of the bill. The legislation would allow courts to waive claim of foreign sovereign immunity after an act of terrorism occurs within U.S. borders. “If innocent families [of drone attacks] were able to take the U.S. to court instead of seeing joining ISIS or al-Qaeda as their only resort, that would be a very positive thing.” Benjamin is author of the book “Kingdom of the Unjust: Behind the U.S.-Saudi Connection.”

JUAN GONZÁLEZ: We turn now to Wednesday’s decisive vote by Congress to allow Americans to sue Saudi Arabia over the 9/11 attacks, overriding President Obama’s veto of the bill. It’s the first time during Obama’s presidency that his veto has been overridden by Congress. The Senate rejected the veto 97 to 1, while the House rejected it 348 to 77. This means the, quote, Justice Against Sponsors of Terrorism Act now becomes law. This legislation would allow courts to waive claim of foreign sovereignty immunity after an act of terrorism occurs within U.S. borders. The bill had passed both the House and the Senate earlier this year, but President Obama had vetoed it earlier this month. This is the president speaking to CNN on Wednesday.

PRESIDENT BARACK OBAMA: What this legislation did was it said if a private citizen believes that, having been victimized by terrorism, that another country didn’t do enough to stop one of its citizens, for example, in engaging in terrorism, then they can file a personal lawsuit, a private lawsuit in court. And the problem with that is that if we eliminate this notion of sovereign immunity, then our men and women in uniform around the world could potentially start seeing ourselves subject to reciprocal laws. And the concern that I’ve had has nothing to do with Saudi Arabia per se or my sympathy for 9/11 families; it has to do with me not wanting a situation in which we’re suddenly exposed to liabilities for all the work that we’re doing all around the world.

AMY GOODMAN: In July, the Obama administration declassified 28 pages from the September 11 report detailing possible ties between the Saudi government and the 9/11 attacks. The declassified documents raise new questions about the role of a Saudi consular official based in the Los Angeles area. He personally helped two of the hijackers after they arrived in Los Angeles in early 2000. Fifteen of the 19 9/11 hijackers were from Saudi Arabia.

The Saudi government financed an extensive lobbying campaign against the legislation but stopped short of threatening any retaliation if the law was passed. There was no official reaction from Saudi Arabia after the votes.

The override of President Obama’s veto comes as the Senate last week rejected a proposal to block the U.S. from supplying the kingdom with more than a billion dollars’ worth of tanks and other military hardware. Critics of the weapons deal say it could drag the U.S. into the Saudi-led war in Yemen and contribute to the humanitarian crisis there.

For more, we’re joined by Medea Benjamin, co-founder of CodePink. Her most recent book, Kingdom of the Unjust: Behind the U.S.-Saudi Connection.

Medea, if you can talk about the significance of this first-ever override of an Obama veto and what this means for Saudi Arabia?

MEDEA BENJAMIN: I think the significance is that, finally, we have an example of the U.S. Congress putting the U.S. citizens above the relationship with the Saudi government. And this is significant because, year after year after year, Congress has done nothing to stop arming to the teeth the Saudi government—$115 billion worth of weapon sales under Obama alone—a government that treats its own citizens with tremendous repression, beheads peaceful dissidents, treats women as minors their entire lives, has millions of foreign workers who are treated like indentured servants, and spreads this intolerant, distorted version of Wahhabism around the world. And the U.S. is not only arming the Saudi government, but is directly involved with the Saudis in the devastating war that’s going on in Yemen. So this sort of opens this issue up to much larger questions.

JUAN GONZÁLEZ: Medea, but what about the president’s argument on this issue of the impact in a broader sense to the United States, and also the talk now in the House and the Senate about revisiting this legislation with some carve-outs or some changes to it later?

MEDEA BENJAMIN: Well, actually, this legislation is quite narrowly written, and people don’t think that it will allow the payment of compensation, and the executive branch could stop the courts at any point. So, I think this question, though, about whether it would open up U.S. officials overseas to lawsuits, I actually think that could be a positive thing. For example, if the families of victims of drone attacks, innocent families, were able to take the U.S. to court instead of seeing joining ISIS or al-Qaeda as their only resort, that would be a very positive thing.

JUAN GONZÁLEZ: And, Medea, do you see any prospects of the Senate and the House revisiting this legislation?

MEDEA BENJAMIN: They certainly might revisit the legislation. They might make it even more narrow. But I think we should just look at the larger picture of what has happened since the Iran nuclear deal, since the reasoning, questioning of the Saudi weapons deals. And I think that we should start looking at all the areas that the Saudis have been using to buy consent in the U.S., giving large donations to Ivy League colleges, to think tanks, to the Clinton Foundation, to the John McCain foundation, paying eight different groups in Washington, D.C., as lobbyists—for example, Tony Podesta, the brother of John Podesta, who runs the—Clinton’s presidential campaign, receiving $140,000 a month from the Saudis. All of these things should come out now as we question the U.S. relationship with the Saudi government.

AMY GOODMAN: And what do you most want to find out, information coming out in lawsuits of the 9/11 families, about Saudia Arabia’s role, Medea?

MEDEA BENJAMIN: Well, there are, supposedly, 80,000 pages of documentation about relationships between the hijackers that we know nothing about, particularly those that live in Florida, in New Jersey, in Virginia. This has all been hidden from the public. And through the courts is the only way to get some of this information out. So I think it’s like ripping the band-aid off. Let’s see what’s underneath that. And then this really allows us to start the much broader issue of questioning.

And the fact that you just had on Bill McKibben talking about the devastating impact of the fossil fuel industry, let’s also connect that to Saudi Arabia, where the basis of our relationship has been, for decades, around oil, and now includes the Saudis propping up the military-industrial complex, being the, by far, largest purchasers of U.S. weapons.

AMY GOODMAN: Medea Benjamin, we want to thank you for being with us, co-founder of CodePink, author of Kingdom of the Unjust: Behind the U.S.-Saudi Connection.

Report: Donald Trump Violated US Embargo on Cuba in 1990s Even as He Called Castro a Brutal Dictator

NEXTReport: Donald Trump Violated US Embargo on Cuba in 1990s Even as He Called Castro a Brutal Dictator 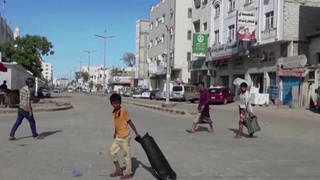